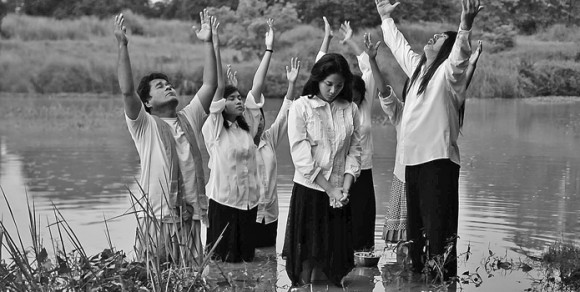 If you want the entire experience of the 68th Venice Film Festival bottled up into one grand (almost) six-hour marathon, surely there’s no better way than Lav Diaz’s Orizzonti sidebar closer, which was—as always seems to be the case with Venice screenings of the Filiipono director’s epics—screened on the penultimate night to glazed if welcoming eyes and already deformed bodies, only to emerge as the magisterial fusion of  key strands of the festival: religion and faith (cf. films by Karmakar, Olmi, Ferrara and others), theatricality (Sokurov, Cronenberg, Polanski . . .), the attempt to overcome alienation (Lanthimos, Sono, German jr. etc.) and, not least, the role cinema plays—or should play—in all this (Naderi). (Only closeups of genitalia are conspicuously absent, if strongly implied.) Alternating stretches convey the stories of of a Chistian cult (led by Diaz axiom Joel Torre, sporting amazing wigwork) and its disintegration after the arrival of a photographer and of a (in many ways quite autobiographically conceived) filmmaker, who questions his work and his outlook in general as he struggles with an unfinished film. (“It’s existentialism,” he says in one of the many discussions with his lead actress, “It has no ending.”) Complicating matters are long excerpts from this project, presented in consumer-grade video, as seen on the director’s laptop, in stark contrast to the hi-def black and white of the main strands, which manages to evoke long past celluloid glories in its radiance. As usual, Diaz alternates long scenes of high intensity with generous, observant takes, producing a rich tapestry in which the main themes forcefully emerge as their poetic rhymes on different levels get more pronounced, while taking time to explore his subjects and their society with unusual complexity. Also, the cult’s hymn surely is the catchiest anthem around on the festival circuit. 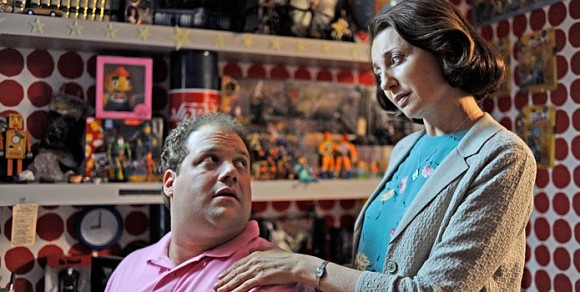 Depending on your general outlook about le cinema Solondz, the fact that many of the misanthropic auteur’s usual champions (including the New York Film Festival) have had little use for his latest could be taken as either a warning sign or a boon. On the level of pure technique, Dark Horse is indeed Solondz’s cruddiest-looking film ever, his customary matte lighting and offhandedly Constructivist suburban non-spaces replaced by a blobby digital ugliness that, sadly, doesn’t allude to or comment on The Ugly. (“It’s not Cinema. It’s HBO.”) What’s more, the plangent hall-of-mirrors formalism that made Solodz’s previous film Life During Wartime something of a breakthrough is barely in evidence here. We just see supporting characters popping up here and there, as memories or ghosts. All the same, Dark Horse could be Solondz’s best picture in years. The story of Abe (Jordan Gelber), an aggressive, abrasive nobody who blames everyone but himself when he inevitably fails to deliver the goods, this film is in many ways the obverse of so many other Solondz joints, wherein misfits and lonelyhearts are beaten down for sheer sport. Abe is given more opportunities than he has coming to him, and he pisses them all away, bitter that the world isn’t rolling out the red carpet for his sorry ass. Although Solondz can’t resist one left-field sucker punch (a disease-related spoiler), Dark Horse is primarily about the perils of self-destructive behaviour, combined with misplaced “positive thinking.” 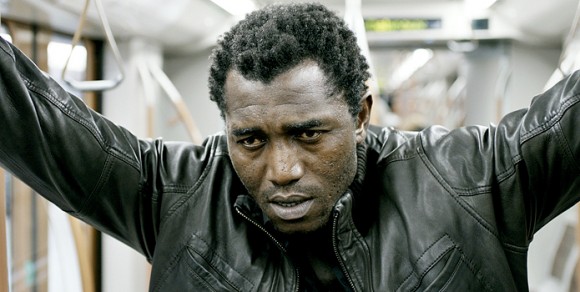 Only the weak shun hyperbole: The Invader is quite possibly the stupidest film to play at this year’s festival, all the more so because it takes such a sudden, shocking swing into idiocy after a generally strong first half. Though really, the opening sequence should have prepared one for what was to come, setting up the film’s ultimately boneheaded thematic with sledgehammer subtlety: a Courbet-quoting first shot (this year’s festival is certainly heavy on the genitalia openers; cf. also Faust, Killer Joe, etc.) pulls back to reveal a Nordically blonde beauty on a nude beach, who walks towards the surf as a washed-up cargo of illegal African immigrants stumble onto the shore, including our hero Amadou (hulking, handsome and charismatic Issaka Sawadogo, also featured in this year’s Hotel Swooni), who exchanges charged stares with the distant, alabaster-skinned goddess.

Cut to later, as Amadou and other illegals are working for a crooked contractor doing surreptitious construction work. When Amadou’s sickly friend is booted out of their dingy squat by the boss, Amadou smashes up the bastard’s luxury car and takes off into the city. These early sequences, light on dialogue and filmed with a rigorously reserved stylishness that makes good use of ambient city sound, are all reasonably compelling, helped considerably by Sawadogo’s magnetic presence. These virtues also carry the film through what turns out to be its transition into jaw-dropping absurdity, as Amadou, kitted out in some sharper threads that he steals off his former boss, becomes fixated on a sleek blonde businesswoman (Stefania Rocca), follows her to a posh conference and later charms her into bed, their rutting captured through a full-length window (another key motif this year, particularly for aspiring formalists; cf. Shame) in a mirror of an earlier scene where Amadou and his compatriots were driven through the red-light district with rows of untouchable (for clandestines, at least) women beckoning from behind glass.

It’s at this point that what had seemed to be turning into an unlikely picaresque—with the penniless African illegal working his way into the upper echelons of posh white privilege—segues into Fatal Attraction, as Amadou inexplicably acquires illusions (and delusions) destined to be shattered and vents his frustrations, murderously. And thus a lightly formalist treatment of immigrant subjectivity unthinkingly begins to echo some of the key tenets of Anglo-European racism: seems that the black man really does want to take our money, sleep in our houses and fuck our women. As this was presumably not the filmmaker’s intended meaning, one wonders what the hell was. Provost is clearly attempting to highlight the links between social tensions and individual pathology, with sex as medium of exchange (and field of battle) between classes, but he handles it in such a disastrously clumsy fashion that the film begins to exert a truly perverse fascination. 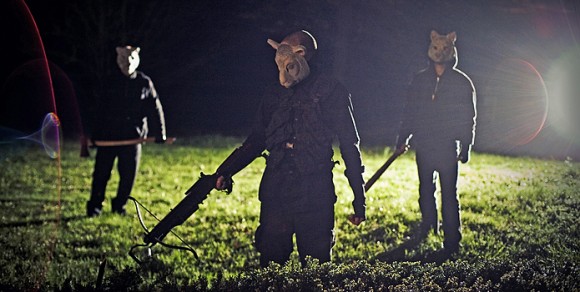 Should you find yourself in a secluded mansion making a post-coitus drink at night, it is never advisable to wear only an oversized man’s button-up and turn up the Dwight Tilley Band—it is an ideal scenario for the perfect kill. So begins Adam Wingard’s You’re Next, the follow up to A Horrible Way to Die, the Midnight Madness favourite heralded as the first genre hybrid of mumblecore and horror (did everyone forget about Baghead?). If the Dwight Tilley reference didn’t cue you to this, You’re Next stays close to these American indie roots, not only in its scoring but also with the seemingly improvised dialogue and focus on a white, upper-middle-class cast of characters. But the navel gazing that can make some of those films intolerable is toyed with here, as those very navels are punctured by screwdrivers, machetes and arrows.

Using many of the same actors from Horrible, this time around Wingard creates a more tautly wound horror film, and a genuinely terrifying one at that. As a tense family reunion turns into a nightmare after masked men lay siege to a posh estate, one of the son’s girlfriends, Erin (Sharni Vinson), fights back. While Wingard proved he could do horror with Horrible here he proves he can also do humour, albeit as black as it comes. You’re Next seamlessly evolves into a dark comedy, purposefully exposing horror genre conventions (most notably in its use of sound) and reflexively mocking itself (not to mention indie filmmakers). Much of this humour is due to the cast, whose deadpan deliveries of lines ranging from “Fuck me next to your dead mother” to “I grew up on a survivalist compound” are spoken with such utter conviction the absurdity feels as though it is being celebrated. But beneath this humour there lingers a palpable cynicism—towards family, relationships and even academia—that never allows You’re Next to descend into a mere spoof. Instead, the film creates both a fresh text from old conventions and fresh kills with innocuous objects. Both admirable enough achievements to make us look forward to whatever Wingard does next.

Century of Birthing, Dark Horse, The Invader, You're Next