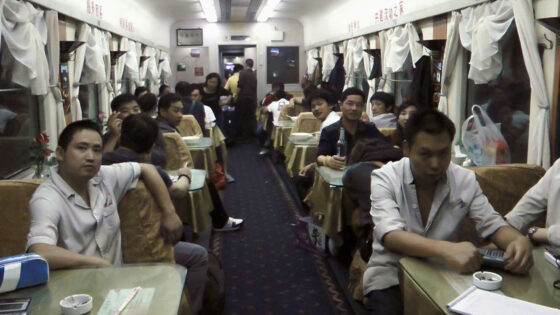 Issues of transit, dispersion, and the commercial and cultural tides precipitating each successive wave of Chinese migration have preoccupied filmmakers for decades. But as an influx of nonfiction work concerned with such sociological conditions continues to permeate international cinema, it’s clear that the relationship between artistic and industrial progression is anything but proportional. Whether the setting is nautical, as in Yung Chang’s riverboat-as-consumer-capitalism parable Up the Yangtze (2007), or rural, as in Lixin Fan’s Last Train Home (2009), a visual record of the annual homeward exodus of over 130 million migrant labourers for Chinese New Year, the discrepancy remains the same, as the country struggles endlessly to reconcile its vast populace with its cross-continental economic responsibility. It’s a contradiction in terms that the People’s Republic of China has at points both thrived on and relied upon, and one most comprehensibly indexed in Wang Bing’s West of the Tracks (2003), which outlined in three movements—“Rust,” Remnants,” and “Rails”—the strain of this accumulated evolution on contemporary, working-class China and the communist ideals which have historically proven difficult for the country to reconcile.

The same elements could be said to formulate the nexus of director J.P. Sniadecki’s corpus to date, with all converging as a kind of quantum agent in his latest work, The Iron Ministry. But if Sniadecki’s trajectory feels preordained, he has navigated the course with the industriousness of one of his subjects. Save for a single stopover on US soil to collaborate with Véréna Paravel on Foreign Parts (2010), all of the Michigan-born Sniadecki’s work has been produced in China, where he lived and worked itinerantly for almost a decade. And yet even Foreign Parts, a document of the impending urbanization of the Willets Point neighbourhood of Queens and its parade of scrap and salvage yards, betrays a concern for the elemental and ecological nuances of an underrepresented community (not to mention the peripherally prophetic fact that Willets Point is otherwise known as “The Iron Triangle”). Far from a catalogue of China’s proletariat—or, worse yet, an appropriation of the country’s inherently exotic properties—Sniadecki’s Far East films have proven dynamic, stylistically daring dispatches of both cultural and cinematic integrity. Within literal borders of sovereign command, Sniadecki has facilitated a democratic dialogue between parties not only on screen, but—if we’re to infer the viewer as an integral component in these films’ thematic capacity—off as well.

The Iron Ministry situates this ongoing conversation within the most symbolic of mobile spaces, along the practically endless expanse of China’s most elaborate railway network. Shot between 2011 and 2013 over multiple trips across the most urban and rural areas of the Republic, the film condenses in one respect the spatial and temporal boundaries of its own creation, while summarizing in another the incremental progress of a nation both reverent of and resistant to tradition—all into what appears to be a single, headlong push through an unfolding succession of cars and compartments of various vocational and social identities. Thematically speaking, this perspectival narrowing is advantageous, constructing as it does an allegorical framework by which Sniadecki is thus enabled to concentrate a large sampling of communities in one centralized space—in effect presenting this particular trip on this particular train as emblematic of a larger contemporary Chinese experience. But from a narrative standpoint, it’s also practical. In an interview at Locarno, where The Iron Ministry premiered, Sniadecki explained this structuring device as just that, stating that “only through cinema can the old collectivist era ‘green skin’ trains be directly coupled to not only the later air-conditioned ‘red skin’ trains but also the newest high-speed bullet trains of today.” Whatever the rationale, the result is a seamless, streamlined experience, and an efficient presentational analogue to the locomotive physicality Sniadecki purports to reflect.

No matter the accelerated scope of his visual language, Sniadecki’s greater objective—to give voice to his subjects—remains unchanged. We meet a variety of individuals on our journey, scattered across and between train cars (with just a telling tease of first class, where we watch as Sniadecki is denied access), all travelling as a means to an end that may very well never arrive. Merchants occupy the interiors, as men chop sides of beef, separating remains and hanging rib cages, and women load fruits and vegetables, boxing their wares for the ride ahead. Vendors, meanwhile, sell snacks and shoe polish to passengers stacked one atop the other, as debris piles up alongside crevices and corridors. Once situated, however, passengers mostly wait—for their destination, naturally, but also on opportunity and, ultimately, for a kind of existential fulfilment. Sniadecki, speaking from off screen as he’s often done in prior films, engages riders in conversation, gathering observations on the particular plights and cultural conditions which plague these everyday citizens. There’s discussion of everything from religious affiliation to factory conditions to the economic environment which not only precipitates such widespread pilgrimage but which has, to hear one man tell it, also driven the real estate market toward overinflation and in turn necessitated later marriages amongst younger generations. And while much of the hardship depicted is unique to China’s political climate, it takes only a single, rhetorical inquiry—“Everyone’s got steamed buns to eat, so there’ll be no revolution, right?”—to reinforce the familiarity of such a forecast.

While not yet as celebrated as many of his colleagues, Sniadecki, who studied media anthropology at Harvard and now teaches at Cornell, is nonetheless part and parcel of a new generation of nonfiction filmmakers acutely interested in the capability of cinema to reorient cultural and environmental precepts. As such it’s inevitable we come to his ongoing affiliation with Harvard’s Sensory Ethnography Lab, a resource facility and community which should be familiar to any regular reader of this magazine but which has, in short, established itself as the preeminent outlet for progressive, experientially inclined cinema. Certainly no stranger to boundary-pushing conceits, Sniadecki—whose recent collaboration with Libbie D. Cohn, People’s Park (2012), unfolded as a single 78-minute tracking shot through Chengdu city’s most popular public plaza—proves more than capable with The Iron Ministry of reconciling the intimacy of such past observational dispatches as Songhua (2007) and Demolition (2008) with not only his ever-maturing methodology, but also the expressionist flourishes which have situated many SEL-associated projects within realms closer to the avant-garde rather than fields of more traditional documentary filmmaking.

Though developed and shot concurrently with the SEL’s rise to prominence—and while not produced in association with the Lab or its resources—The Iron Ministry, particularly with regard to its radically integrated visual and aural approach, feels very much of a piece with the collective’s advances in formal conceptualization and stylistic articulation. Of similar tone and visceral constitution as Leviathan (2012), the film opens with a thrilling wordless prologue of thundering abstraction, pitting shrill, metallic overtones against tight, tactile close-ups of the train’s inter-carriage infrastructure, pushing to an extreme the sensory capacity of a distinctly cinematic fusion of the physical and neurological. On multiple occasions the film gives way to similarly disorienting interludes, as rapid horizontal optical activity fills the frame, the cacophony of the train’s mechanical exertion asserting an unshakable presence in the experience of audience and passenger alike. Presiding over the sound design and mix is Ernst Karel, already a key SEL associate having worked on not only Leviathan but also less demonstrative achievements such as Sweetgrass (2009) and Manakamana (2013), who here confirms himself once and for all as the Lab’s most vital ongoing collaborator. But it’s the holistic vision of Sniadecki—who has often worked with co-directors but is here credited with the film’s image, sound, and edit—which finally and most forcefully asserts itself. As a solo statement of intent, The Iron Ministry is an undeniably virtuoso accomplishment. More importantly, as an empathetic portrait of perseverance, it’s a humane, often illuminating transcontinental chronicle.