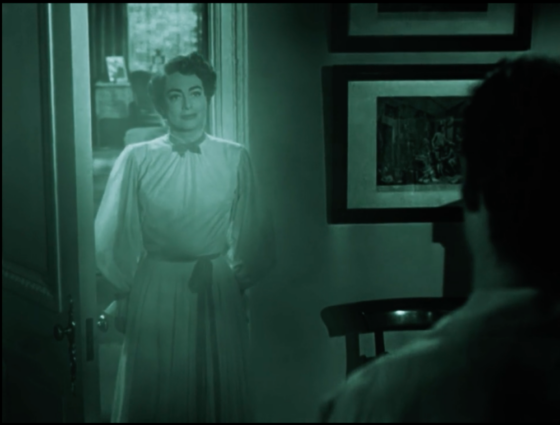 That Guy Maddin’s feature-length follow-up to his most monumental work to date—the staggering mise en abyme of The Forbidden Room (2013)—would be The Green Fog, a 63-minute, found-footage video reimagining of Alfred Hitchcock’s Vertigo (1958), is entirely apropos (and a rather Maddin-esque sleight-of-hand) when one considers the fanfare with which The Green Fog was unveiled: as the closing-night event of the San Francisco International Film Festival’s 60th anniversary, with a score composed by Jacob Garchik and performed live by the Kronos Quartet. Certainly, when taken in the context of a decades-long career, the project is less immediately an impressive object. But at the same time, despite preconceptions of what such a project should normally be—a rhapsodic tribute to San Francisco, methodical archival exercise, or staid academic treatise—it’s not one so easily compartmentalized, nor one beholden to any single notion of “quality.” So, to heed Maddin’s opening exhortation via the pointed switch of an analogue dial: Listen first, talk later.

Positioned as a thematically structured clip-party reel of San Francisco, cobbled together from over 200 films and TV shows, and co-directed by now-regular collaborators Evan and Galen Johnson, The Green Fog eventually reveals itself to be something of a media archaeological undertaking. Taken as a whole, the project is unconcerned with recounting the city’s film and television portrayals in a linearly historical manner or tracing the area’s chronological cultural development. Rather, it explores localized commonalities, patterns that persist through time and across media. Thus, the iconography of Vertigo here become points of arrangement, the loci around which various representations swirl in a febrile haze. The location from which Scottie first tails Madeleine in Vertigo, for example—the commanding view of Brocklebank Apartments, perched atop Nob Hill—jumpstarts a threatening tour of San Francisco’s streetscapes. The camera tracks and swerves, rising and falling with every paved undulation and concrete incline, bridging time and space with each cut. Much of the filmmakers’ montage is arranged this way: around spatial and gestural patterns that create an “emotional geography” (to use Maddin’s own words) and provide continuity to heretofore unlinked imagery.

The catholicism regarding the materials used—which range from ’70s TV procedurals such as McMillan & Wife to pop-culture objects like Star Trek IV: The Voyage Home (1986) to now-classic works such as Orson Welles’ The Lady from Shanghai (1947)—proves crucial in that regard. After all, such patterns of representation persist however frivolous or serious the specific (found) objects, or, for that matter, the larger projects themselves (say, an anonymous Oscar montage on one end, a Thom Andersen cine-essay on the other). Indeed, the links between so-called “high” and “low” forms—even within “popular” media such as film and television—are often far more than coincidental. Rather, these relationships—often tied up in prevailing socioeconomic structures—are, if not strictly causal, then osmotic or (increasingly) non-hierarchical, even rhizomatic. Typically for Maddin’s singularly anarchic sensibility, The Green Fog oscillates wildly between such modes. The political paranoia of the ’70s—illicit recordings, screens within screens—is channelled through Francis Ford Coppola’s The Conversation (1974); apocalyptic visions of destruction, by virtue of the city’s geographical position along the San Andreas Fault, burst forth in Hollywood blockbusters like Godzilla (2014) and San Andreas (2015). And then there’s the recurrence of falling—represented by Vertigo, but also by films like High Anxiety (1977), Mel Brooks’ Hitchcock parody—which has persisted (and will likely continue to persist) as long as the Golden Gate Bridge stands. But there’s room, too, for the city’s distinctive qualities to emerge in oblique, but joyous snatches: its renowned dining scene (represented most notably by Ernie’s Restaurant, now shuttered, but immortalized by Kim Novak’s introduction in Vertigo), its teeming atmosphere as an American cultural centre, or even its rolling vistas that stretch out towards the surrounding Bay Area.

All this is evidence of a city continually remaking itself, actively metabolizing its own representation and iconography. (The film’s mythmaking tendencies thus bear a kinship with those of Maddin’s “docu-fantasia” My Winnipeg [2007].) What The Green Fog articulates is, in essence, a state of “becoming.” It demonstrates the act of creation as a perpetually reconstructive effort (see the “impossible” doublings of Vertigo). Not for nothing is the film’s second part titled “Catatonia,” infused as it is with the immobilizing apprehensions that come with such an undertaking. The Johnsons, whose contributions proved so crucial to the warped material of The Forbidden Room, here apply their digital manipulations more sparingly; likewise, the furious editing patterns of, say, The Heart of the World (2000), are mostly traded in for those of the represented clips. Nonetheless, as in Maddin’s other works, there’s a similar sense by which The Green Fog—and here the title and its envious overtones seem apropos; or is it just another cannily suggestive implantation?—taps into a collective cinephile sense-memory, an archive of borrowed, half-remembered dreams and plundered visions. Representations (and representations of representations) are splintered, filtered, warped, and regurgitated; ruptures, dissonant and surreal, punctuate the flow; images dissociate from their original context, so all that’s left are their ontological qualities and fundamental materiality. In that sense, the culmination (and also one of the film’s best jokes) observes a nude Michael Douglas in Basic Instinct (1992) walking into one of Eadweard Muybridge’s studies of movement, the filmic material stripped down to its essence: a body in motion.

Lest that colour The Green Fog as an overly dry theoretical exercise, it should be pointed out that much of the film exploits the disjunction between high art and a kind of “low” humour. (This is, after all, a film from the mind that channelled Kenneth Anger’s Fireworks [1947] into the lunatic, seven-minute Sissy Boy Slap Party [1995].) Throughout, Maddin and the Johnsons continually sabotage the work’s artistic gravity, often building the film to rhapsodic crescendos only to undercut them with ostensible frivolity. The destabilizing opening shot of Vertigo is reworked (and repeated) into a larger, comically extended ladder-climbing set-piece; a sequence in Muir Woods, manipulated into the television screens of a police investigation, then cuts (“Do you have the other angle?”), incongruously and hilariously, to NSYNC’s music video for “This I Promise You.” Another dominant comic effect derives from simply snipping dialogue from various clips, so all that’s left are facial expressions and transitions—dissociated gesture, once more.

It’s almost impossible, given Maddin’s own artistic practice—with its fixation on lost or defunct forms and its reappropriation of the same—to ignore the implications of the film’s climactic conflagration, which is ignited by stray rolls of nitrate film, a detail that gestures firmly towards its makers’ fixations. It’s here worth highlighting that after having worked on celluloid for a number of decades—8mm (Cowards Bend the Knee [2003]), 16mm (Careful [1992]), and 35mm (Twilight of the Ice Nymphs [1997])—Maddin recently made the shift to digital: partially with My Winnipeg, fully with Keyhole (2011), and then decisively with The Forbidden Room (notably, his first collaboration with Evan Johnson). Taken with the latter, especially—a fully digital work that convincingly recreates the look of decaying, two-strip Technicolor film—the aforementioned detail marks a decided shift in anxieties. The danger, after all, is no longer that of (analogue) obsolescence, but, as the sheer amount of material included in the project might indicate, of (digital) oversaturation.

Just months from its premiere, The Green Fog already seems like an object shrouded in obscurity, its shape-shifting forms liable to be crowded out in the contemporary cinematic landscape. (The prohibitive screening requirement that the Garchik’s score be performed live by the Kronos Quartet—which understandably limited the film’s festival presence, as its sole post-San Francisco screening so far was in Vancouver—has now been resolved, so the film will likely get a theatrical release in 2018.) Precisely because the film positions itself so unassumingly—not so much structured by, as around Hitchcock’s masterpiece—it feels destined to be a career footnote more discussed than actually seen. But there’s something poignant about such an endpoint: that one of the most canonized works in cinema history should be transformed into a doggedly inconspicuous work—a movie shielded from the fires of history, but then plunged into a sea of digital noise.