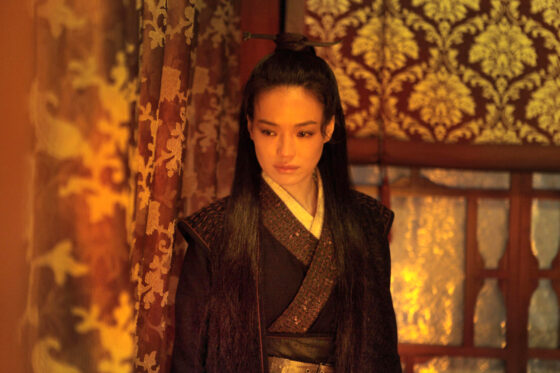 The sounds of silence reverberate loudest in The Assassin, Taiwanese master Hou Hsiao-hsien’s first feature in eight years. The film’s opening image, of a donkey quietly grazing in a field, immediately suggests an acute awareness of natural ambience. This impression manifests itself as the most frequently felt resonance in a work largely built around aesthetic absences and abstractions. A simmering, sumptuous ninth-century-set wuxia inspired by a popular work of Tang Dynasty chuanqi literature, The Assassin finds Hou returning to the historical drama after a prolonged, post-millennial period of more contemporary cultural and romantic concerns, as well as to matters concerning China’s distant past following the fin-de-siècle fever dream of The Assassin’s most direct stylistic and thematic corollary, Flowers of Shanghai (1998).

Despite its generally serene demeanour, The Assassin is intently attuned to the martial discord of the era. In the Tang dynasty’s waning years, a number of provincial governors attempted to directly challenge the authority of the Tang Emperor, provoking a series of uprisings that would strain and ultimately splinter the empire by 907 AD. Hou situates his narrative around Weibo, the most powerful of these independent provinces. The film commences with a prologue, shot in luminous 35mm black and white and framed in compact 1.33:1 compositions, which efficiently outlines the narrative’s deceptively simple dramatic impetus. In a trio of brief scenes, the title character, Nie Yinniang (Shu Qi), is introduced, along with her master, Jiaxin (Sheu Fang-yi), a deadly princess-nun who abducted an adolescent Yinniang 13 years prior. In the interceding years Jiaxin has trained Yinniang to become the rogue assassin we meet in the film’s opening scene, disposing of an unidentified enemy on horseback with one swift slice to the throat from a pocket-sized blade. In the next episode, Jiaxin commands Yinniang to execute a high-ranking official. But as she silently stalks her target, watching as he plays lovingly with his son, Yinniang’s conscience unexpectedly asserts itself, and she flees without completing her task. These scenes are linked through a series of subtle dissolves, and in the final sequence we see Jiaxin chastise her protégé for her compassion, ordering Yinniang to return to her homeland to kill her cousin, Tian Ji’an (Chang Chen), now the governor of Weibo and one of the most prominent political figures in North China.

The majority of the ensuing action, such as it is, proceeds in colour and centres around Yinniang’s reluctance to assassinate Tian, a man to whom we learn she was once promised and for whose wife (Zhou Yun) and concubine (Hsieh Hsin-ying) such unrequited passion quickly proves poisonous. But to discuss plot seems at best futile, and at worst counterintuitive, as Hou’s elliptical and impressionistic storytelling continually works to reorient both our sense of time and character. Like much of the director’s recent work, The Assassin is more concerned with the economy of gestures, the fluidity of motion, the contours of physical space, and the expression of psychology through meticulously rendered mise en scène. Hou alternates static setups and sequence-shots in a manner familiar from such elegant productions as Flowers of Shanghai and Three Times (2005), sometimes moving imperceptibly around characters and through lusciously ornamented indoor spaces, other times remaining fixed in medium or long shot, breathing in the dramaturgical detail flanking his actors.

When Yinniang returns home, the disturbance her presence causes is felt in both the tension of the resulting discourse and the coherence of Hou’s compositional palette; Yinniang’s black robe stands out starkly against the resplendent amber interiors, colourfully coiffed courtesans, and emerald expanse of the palace grounds. In any given scene, more is articulated through the formal arrangement of elements and actors within the frame than through the dialogue, which, spoken in the authentic, antiquated guwen dialect, is highly mellifluous and expressive, rather than expository (indeed, an allegorical tale of a bluebird that refused to sing or dance until it one day saw its reflection may hang heavier in the mind than any of the characters’ more literal conversations).

The cinematography, by Hou’s longtime director of photography Mark Lee Ping Bing, is a triumph, a crystalline and increasingly rare example of 35mm’s inexhaustible potential. Hou and Lee arrange the interior scenes like slow waltzes through rarified spaces. The film’s centrepiece sequence, set in Lord and Lady Tian’s bedchamber as Yinniang looks on from behind gently billowing silk curtains, unfolds like a waking reverie of intimate exchanges and private glances. Soft candlelight dances in the margins of methodically mapped, convex tracking shots that place each element and figure just out of full view, circumventing our perspective just as the characters stand symbolically on either side of a cultural and political chasm which has grown all but unbridgeable since their days as betrothed youths. The pictorial beauty of this scene is self-evident; it’s in Hou’s painstaking orchestration of each component part and the thematic weight imparted by their careful configuration that lends the film a steadily increasing romantic gravitas. In addition to a comparable sense of grace and visual opulence, there’s an air of inexorable longing to the film reminiscent of many of Mizoguchi Kenji’s late-career period pictures—and, in particular, to Princess Yang Kwei-Fei (1955), which in its measured, devastating melodrama achieves a similarly acute sense of poetic tragedy.

Hou’s conceptualization of the film’s fleeting handful of action sequences, meanwhile, evinces far fewer precedents. Like his employment of gangland tropes in Goodbye South, Goodbye (1996), Hou engages wuxia stylings here as a means of functional storytelling and genre commitment rather than as superfluous aesthetic tools (wire work and computer-generated effects are almost absent). The instances of combat are swift and economically visualized, with the film’s only close-ups yielding to quickly edited reversals which elide explicit violence and bloodshed in a manner reflective of Yinniang’s temperate disposition (the film’s expert, precise sound design is of particular note in these scenes). There’s a tactility and rigour to Hou’s images, whether he’s capturing a crestfallen exchange in a dimly lit domicile or a combative encounter in a silver birch forest, and if these eruptions of action are almost frustrating in their tantalizingly concise deployment, they’re likewise impressive in their proficiency and the practical command of the actors’ physicality. As the narrative moves away from the cloistered confines of Tian’s estate in the film’s second half, following the banished aide-de-camp Xia Ling (Juan Ching-tian) as he’s escorted to the border and out of harm’s way after speaking out of order, the irreconcilable nature of Yinniang’s mission grows ever more pronounced, as she dutifully continues to do away with rivals—at one point even interceding in battle on behalf of Tian’s garrison—while hesitating to fulfill her ultimate duty.

Save for one brief and rather startling use of assertively energized music in the film’s lengthiest action sequence, the majority of The Assassin plays out with but a modicum of aural accompaniment, through a sonic spectrum carved around the imprints of negative space. Lim Giong’s sparse score amounts to little more than the pound of distant, metronomic percussion and the occasional, faint hint of zither accompaniment, rising softly as if summoned from the surrounding landscape. By and large the film proceeds in similarly hushed tones, contemplative yet assured, its conversations and commiserations often accompanied by nothing more than the sound of rustling trees and chirping crickets, a distinct break from the dense soundscapes of Flowers of Shanghai and The Puppetmaster (1993). While seemingly incidental, such wilful abstractions eventually push the film toward an inversely heightened plane of aesthetic expression, the narrative firmly rooted in the tenets of reality even as the sensory qualities of its presentation begin to resemble something akin to a cinematic fugue state. When, late in the film, Jiaxin speaks to Yinniang of her nagging impulse toward benevolence, of a mind held “hostage to human sentiments,” the critique is left expressly unacknowledged, suspended between recognition and response, consideration and concession. The silence is deafening.