Mark Peranson/CS41, From The Magazine, Spotlight 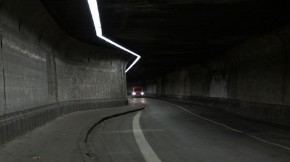 James Benning is not quite Stravinsky, and his first high-definition video (and first film shot outside the US) is not exactly the Rite of Spring, but a trip to the heart of the Ruhr Valley for the premiere of Ruhr at the Duisberg Film Week carried a certain nervous anticipation. After years of shooting on 16mm and finally abandoning it for HD because of an endless series of processing and projection errors, Benning was about to enter further unexplored territory: digital projection. I wish I could say it went off without a hitch, but after a seamless technical check and a marathon of political pomp, the first digital image left the hard drive and gloriously filled the screen—accompanied by a sound meltdown. Thankfully, the auditory disruptions both on screen and off (the latter provided by an audience of vocally incensed Germans) died down for the film’s monumental second half. No damage was done; ultimately, this was more a statement about the present and a harbinger for the future.

Benning’s move from 16mm to digital is not as drastic as it might seem: he’s been editing and experimenting with sound digitally on Protools for a few years. What full HD shooting has afforded him is the possibility of playing with other forms of editorial shorthand, as announced with his Viennale trailer Fire and Rain, a Ruhr outtake that condenses one stage of the steel-making process into about 60 seconds, via invisible edits. One could say “cheats,” but such language would seem to invalidate most contemporary mechanical art from the photoshopped images of Jeff Wall to anything made by the American entertainment-industrial complex involving a digital intermediary. With digital filmmaking, we’re in a cinematic space where the “real” has no meaning; rather, Benning is using all the means at his disposal to create what we could call a reality-directed document. The most immediately noticeable result of Benning’s technological-methodological move is an undeniable change in the quality of the image, in terms of what and how we register what we’re looking at. The high-definition image is more painterly than 16mm, with sharp deep focus allowing for previously unimaginable detail, and Benning is indeed painting on a grand, at times even Romantic scale here, with deliberately composed images designed to engulf the viewer and a soundtrack (at times incorporating what sounds like an electronic drone) that attempts the same—which is why the cinema is still where his filmmaking belongs.

Even though Benning’s previous feature RR was not a nature film per se, the only legitimate criticism I’ve heard directed at it is that Benning left too little time in his shots before and after each train bisected the frame, denying the locations their essential stasis and depriving them of that temporal “breathing space” where they could be adequately registered by the viewer. Shooting Ruhr, Benning has taken this criticism to heart: in the first six shots, which range in length from six to 17 minutes, the places Benning has chosen to record are registered with almost encyclopaedic detail, from the clothes worn by Muslims at prayer (filmed from the rear) to the colours of the window shutters and houses on a typical working-class street. Benning’s primary strategy is to record actions that are repeated over the duration of each stable take, starting with the stream of cars passing through the tunnel seen in the centrefold of Cinema Scope #40. We see and hear both cause and effect: the sound of cars rumbling as they approach, and the small scattering of debris over the asphalt after they have driven into the distance; elsewhere, the slight rush of wind through the branches and leaves of trees preceding the arrival of an airplane over the Dusseldorf airport, and, then, a magnificent whoosh through the trees after it has passed. In Ruhr Benning shows that nothing is ever “at rest” but only in a state of in-betweenness, the digital camera capturing both the anticipation of imminent arrival and departure and the subtle sensuality of things simply being alive for their own sake.

This is a philosophical position, a way of experiencing the beauty of the world that leans towards an implication that the substance of the action doesn’t matter—what’s important is that we register the images simply as images (and, really, we need to be inside of a cinema, free of distraction, to give them the proper attention). But, being human, we are moved to search for meaning. If there is a thesis running through Ruhr, perhaps it should be related back to what Benning was after in the California Trilogy, which likewise examines social and labour relationships in another valley. In the case of a shot of graffiti being removed from a Richard Serra sculpture, Ruhr broadens out to question who decides what is art—the sculpture itself, or the graffiti being removed by soda blasting, with a declaration of love turned into a broken heart. (Here one especially felt the sound failures in Duisberg, though a proper auditory experience of this scene would leave many enervated viewers with splitting headaches.)

The tension between registering and interpreting all comes to a head in the last shot, which due both to its material and its hour-long duration is set apart from the rest of the film (the first six shots, lasting an hour in total, are labeled “1.”, the last shot “2.”). Relieved of the necessity of changing camera rolls, Benning goes all out with a mesmerizing shot of a coke-processing tower in Schwelgern, where every ten minutes water pours down onto the base and creates a billowing pillar of steam leaking through the steel-latticed structure and into the atmosphere; the tower looks like it’s on fire. As it repeats, surrounded by clouds it itself creates, the image takes on a psychedelic quality, with each billowing blossoming into differing colours, a function of both the material being processed as well as the changing quality of the light. By the end of this mind-numbing hour, too, came something that may have been an hallucination: as the shot grew darker faster than time allows—Benning condensed 90 minutes to 60, in effect speeding up the sunset—I swear I saw digital pixelation in the darkest points of the image. Whether or not this even exists—Benning claims it doesn’t—this breaking down of the image into smaller units had the impact of reinforcing the digital source, allowing the medium, if only for a moment, to take the reins.

The tower shot, perhaps inspired by Warhol’s Empire (1964)—imagine what Warhol would have done with digital—brings with it associations of another New York building engulfed in smoke and flame. Despite the sound of airplanes invading the space of the tower in the shot’s first minute (soon followed by sirens), Benning says he didn’t think of the World Trade Center until sometime during the editing process. Take or leave that statement as you will: when placed in context of a number of other shots in Ruhr—the airplanes over Dusseldorf, that complex, always changing shot of the mosque where the standing and sitting bodies of men at prayer at times block the camera completely—well, you do the math. But, as Benning said during one of Duisberg’s famous discussions that lasted well into the night, the images that we have come to associate with 9/11 are not the property of anyone; we need to reclaim them from those responsible. In other words, what you take the images to mean tells more about viewers than the film. Along with being one hell of a head trip, Benning’s first digital feature is his closest to theory. More than a series of specific images, Ruhr is best considered a film about image-making itself.