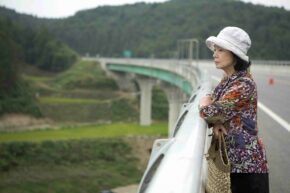 Lee Chang-dong’s Poetry asks no less remarkable a question than this: Can the onset of a person’s loss of language also be the beginning of a new state of consciousness? If poetry can be termed as the elimination of all but the most essential words to convey the most perceptive thoughts, then Lee’s film can’t be exactly termed “poetic,” one of the many potential pitfalls that this extremely tricky title contains. Nor is it trying to be. Poetry is the culmination of a quintet of films about Korean men and women that Lee began with Green Fish (1996), his only foray into genre about a poor family’s son who becomes enmeshed in Seoul’s criminal underworld. By the end of Peppermint Candy (1999), in which the key passages in a brutish cop-turned-salesman’s adult life are examined in reverse chronology, Lee had so thoroughly laid bare and dissected the male ego and id that only women seemed possible as subjects. For the novelist-turned-screenwriter-turned-filmmaker, it didn’t mean some recycling of the musty and despicable Bergman line—women as the mainline to the “soul,” as a substitute for “a silent God”—but a thematic touched by human limitations yet heroic: women as stumbling but dogged explorers, wounded animals capable of creative leaps beyond the ugly world surrounding them. They lack essential functions, refuse to accept societal norms, or are in the process of losing portions of their mind, but are nevertheless able to gather new perceptive abilities and inner fortitude in the midst of a quagmire of decadent machismo.

This inclination began, in Oasis (2002), with a desire to take the camera off the tripod. Green Fish and Peppermint Candy haven’t lost an ounce of their original drive, ambition, and narrative propulsion. (Lee is, among other things, as strong a storyteller as there is in the cinema.) However, they look a bit too clean by this point, because Lee’s subsequent films have been made by a director more confident in his abilities to visually convey the world’s contradictions, the equal interest in the garbage piles in the corner of the frame and characters that simply refuse to play along with expectations. If Green Fish is openly beholden to the yakuza film, Poetry is beholden to no precedents expect those suggested by Oasis and emphatically declared in Secret Sunshine (2007), where a grieving mother’s choices to fill her emotional loss take her to the border between madness and sanity. Mija (Yun Junghee), a 66-year-old grandmother prone to wearing flowery dresses and flamboyant hats, is just as burned by a tragedy brought on by a younger generation as Secret Sunshine’s Shin-ae, but the moral weighting has shifted. While random hazard hits Shin-ae, Mija—while her daughter is working in Pusan—is raising a grandson accused of participating in a gang-rape of a schoolgirl who reacted by jumping off a bridge to her death.

Normally, this would be the heart of the matter, the useful moral dilemma as a catalyst for dramatic ideas. But Mija’s response is decentred, shifted to the side by her impulse, inspired by nothing in particular, to start writing Korean lyric poetry (“shi,” the film’s Korean title). Lee is fascinated by inhibited characters who act without motivation and beyond psychological definitions, since this allows them to map out their own behaviour by means of their subconscious. In Oasis, Gong-ju, enduring severe cerebral palsy, falls in love as a jump into uncharted territory, almost as a test of her own capacity for living. (When she imagines herself as physically whole, and able to speak normally, she launches into verse.) Shin-ae losing her child is a prelude for her real story, which begins with bumbling attempts to reach some kind of ecstatic state through Pentecostal Christianity. While Mija’s journey is similarly open-ended, more mysterious, more laden with potential—Lee’s men die or find some finality, while most of his women continue on indefinitely—the shroud of death hangs in the distance.

She is seen early on as a patient, learning that she may be experiencing the first effects of Alzheimer’s; characteristically for Lee, this is no impediment, and certainly not as a prop for melodrama. Lee’s storytelling is non-diagrammatic, never insistent: There is no simple cause and effect between the initially cautious diagnosis and her decision to sign up for a poetry class at a community centre in her smallish city on the banks of the Han River. That doesn’t mean, however, that the viewer is denied such a cause-and-effect reading if they choose one, and Lee isn’t a filmmaker to either encourage or discourage it. This is perhaps the most notable aspect of the evolution of Lee’s screenwriting—rewarded at Cannes with the screenplay prize—starting from the unmistakable determinism of Green Fish and the elegant but closed geometrics of Peppermint Candy. Like his camera, which allows viewers to make their own compositions and choices within the larger frame, his narrative approach trusts in granting characters their own lives, so much so that one gets the sense that they frequently surprise Lee himself with the choices they make.

When Mija isn’t attempting to follow her poetry teacher’s instructions to observe things for their potential beauty—even in her kitchen sink—she is putting up with her surly, non-verbal grandson or the ornery ways of an elderly male stroke victim she tends to daily. This follows a pattern seen in the early reels of Oasis and Secret Sunshine, when pure routine defines characters’ lives, with the vital wrinkle here that Mija has encountered an outlet for her better impulses. Her unexpected decisions stemming from a series of awkward meetings with the fathers of the boys being investigated in the gang-rape (involving how much they should compensate the dead girl’s family, as if cash can put a period on grief) are diametrically opposed to such routine, and may even be the fruit of a mind opening to poetry’s imaginative associations even as its capacity for memory and vocabulary is beginning to close down. It would be fascinating to know what Lee’s early drafts may have first intended for Mija to say to the dead girl’s mother when she treks to meet her, since what actually transpires on film can’t be anticipated, and seems to be thoroughly the result of an author allowing his fictional character a loose rein.

This narrative freedom is more interesting than the film’s lauded conclusion, which perhaps drew more appreciation than usual since Poetry was one of the Cannes Competition’s only films with an emotionally heartfelt ending. But the more effective emotions derive from the face and eyes of veteran actor Yun Junghee, whom Lee cajoled out of a 16-year retirement. Lee has consistently drawn great performances from his actors, and only partly because he writes huge roles for them. He gives his actors space to move and breathe, and grants them the opportunity to fail—absolute catnip for actors with an instinct for risk. Each of his leads could easily have taken disastrous turns onscreen: Sol Kyung-gu’s doomed Yongho in Peppermint Candy could have been hopelessly anti-climactic after his life-ending opening sequence, just as his immature Jong-du in Oasis could have become an absurd cavalcade of tics and misfit mannerisms, just as Jeon Do-yeon’s Shin-ae could have collapsed in a torrent of hysterics; and let’s not even consider what a lesser actor might have done with Gong-ju in Oasis, whom Moon So-ri understands as a woman with desires, not as a vehicle to display physical contortions. Risk is in fact endemic to Lee’s filmmaking, which may appear to be plowing the traditional turf of psychodrama, but is most attuned to a fascination with the capacities of otherwise regular women to uncover their concealed selves and, by doing so, rebel against societal norms even stricter than the most precise and demanding arrangements in Korean lyric poetry, which everyone in Mija’s class—save Mija herself—agrees is “too hard.”