Jay Kuehner/CS48, From The Magazine, Spotlight 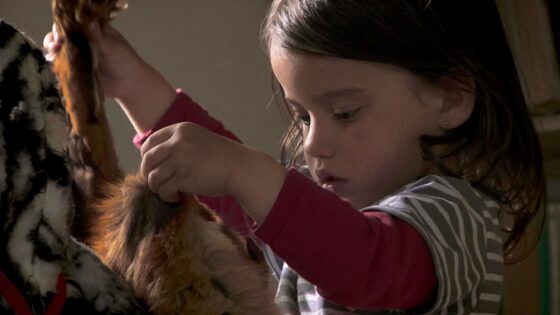 Consider it a triumph of the medium that soon we may not speak of “in-between-ness” or indeterminacy in cinema (let alone “slow” or “contemplative”), such attributes having become subsumed by and substantive of film itself, commonly deployed to a point of sufficiency. In which case a film such as Valérie Massadian’s Nana, recently awarded the Opera Prima award at the resurrected Festival del Film Locarno, might be received with the same fierce lucidity with which it was delivered, and rightfully so. Succinct and mysterious, taut and langourous, hermetic and expansive, Massadian’s pastoral fable strikes a memorably unnerving chord that only so much context can assuage. Unfolding predominantly in fixed takes around a country farmhouse in the director’s native Perche region, the film cedes its ostensibly observational approach to an unsuspecting, and rather hypnotic, centre of gravity: four year-old Nana (Kelyna Lecomte), whose fate is left agonizingly uncertain during an idyll of latent foreboding.

With a distancing mise en scène and a withholding narrative scheme, Nana might be opportunistically read as a provocation of sorts, an affront to certain orthodoxies of staging and routine viewing habits. Yet Massadian engages with her material in an utterly unaffected fashion that yields a becalmed but charged transparency, suggesting a wealth of drama within a paucity of incident. It is tempting to cite the director’s longstanding working relationship with photographer Nan Goldin as a point of aesthetic reference, although of little discernible influence beyond methodology. There are moments when the material world of Nana’s existence—a colourful quilt, toys on an upholstered chair, branches of a tree—is made nearly palpable: these are purely concentrated compositions that reflect Massadian’s work as a photographer. But it is through such materiality that a measure of time and sentience is made: the clarity of presentation suggests a strain of naturalism (associated with documentary) while resisting a hierarchy of visual importance (associated with fiction). From the perspective of Nana, which the film clearly privileges, the world is in a state of becoming, and many objects have equal claim to her attention. This visual and spatial “democracy” becomes increasingly effective as Nana is left to fend for herself in the absence of immediate care. Massadian’s very camerawork seems to be asking the question of whether the world is ever at the mercy of one’s fingertips, child or adult.

Similarly, there is a sense of relativity conveyed in the portrayal of everyday proceedings (in stark contrast to the heightened states of a child’s subjectivity) that evinces a more elemental, as opposed to characterological, drama. Witness the film’s opening scene of a pig being slaughtered in the farmyard—much to the viewer’s horror but the butcher’s delight—and the protracted struggle of the animal in the throes of death. The scene recalls Depardon’s Profils paysans films (2001 and 2005) and Eustache’s Le cochon (1970) in equal measure, and is sustained long enough to transcend shock and assume sheer veracity. Only later in the film will the magnitude of the event be revealed, less as an instance of plot but as a manifestation of a child’s impressionability. The notion of legacy is central to Nana’s particular rural ontology, to the extent that it plays like a fairy tale practically stripped of its moral, distilled to a kind of natural koan.

Indeed, the power of myth pervades Nana, without ever tipping into the fantastic or upsetting its hewn naturalism. The bedtime story read to Nana by her mother involves a spirit who encounters a slain man and his dog and exchanges their hearts, whereupon the dog wags his tail in recognition of the man’s indignation. The film never delineates any analogous genesis of man’s supposed cruelty, but the notion of transmission between the living and dead, animal and human, is conjured in a hushed and poignant sequence involving Nana’s discovery of a dead rabbit in the nearby woods, snared in a trap set by her grandfather. The girl’s treatment of the slack bunny is at once comic, cruel, and heartbreakingly tender, as she perches the animal doll-like on a chair before ritually preparing it for a proper funeral. Shrouded in straw grass just like the pig before it, Nana delivers it to the pyre. It’s a bold move for a four-year-old girl left to her own devices.

The act of deliverance is weighted by the inexplicable and increasingly unbearable absence of Nana’s mother, whose mysterious and urgent forays away from their country house portend a crisis we never get to understand. This absence lends Nana a sense of mystery and dread that, depending upon your view, distracts from or offers sharp relief to the unfolding drama of a child awakening before our very eyes. The notion of ancestral legacy is felt in the affectionate exchanges between Nana and her mother, but is more acutely registered in the maternal attitude extended by the director, herself a mother of one, to her subject. The level of candour achieved by Massadian with her actor is astonishing in its freedom and lack of sentimentality, the camera witnessing the child’s blooming imagination, developing motor skills, verbal antics, and, on one occasion, an unwitting, risible parody of the adults around her. “You think you’re so smart?” she echoes. “I’m tired of your bullshit…What a fucking mess.” Her rambling, mimetic monologue, while piecing together a puzzle, offers possible clues to her mother’s apparent disappearance.

In spite of willful or unintentional negligence, Nana carries on with confidence that suggests she is used to such absence, that an adult is never too far, and that she is perfectly capable on her own. Nonetheless she is left woefully exposed before the audience, her safety at risk, and the question of her care becomes the abiding enigma of the film—and the stuff from which horror, of the bucolic shock variety, is so often born. Massadian leaves the mystery titillatingly unresolved, while employing the occasion as a vigil, attending to Nana as she in turn attends to the world around her, defined by what is present rather than absent. Under a perpetually gauzy light filtering into the lone house—a tableaux of the child’s eternal afternoon, a still life littered with a stuffed donkey, bicycle, books, crayons, blankets—Nana is revealed in a mesmeric twilight of solitude, so much so that her meal of cookies and milk and the act of dressing become modest miracles in their own right. And the couch in the yard becomes something of a throne to her as she presides over her natural dominion of birdcalls, barking dogs, and a breeze rustling through the trees.

Nana’s idyll unfolds without an obvious pressing provocation or incident—it comes at no narrative expense—but it ultimately belies the spectral, and finally tragic, fate of her mother. That Massadian is keen to countenance such insolubility is a sure gambit that renders the film recondite—the preferred condition of indeterminate cinema—and the enemy of exegesis. At a lean 68 minutes, and denuded to its cryptic core, Nana may be insular to a fault, but is wide open for identification. In which case the notion of purity in cinema may become subordinate to preference, whereby states of inattention may be the point or the peril of watching. Nana weaves a spell by virtue of leaving ample room for both, implying that at any given moment the real and the mythic describe each other. Sometimes films, like children, are terribly inscrutable, and have minds of their own.