Andrew Tracy/CS41, From The Magazine, Spotlight 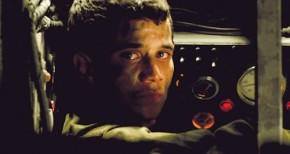 Whatever else it might be, the high-concept festival film is a wonderful labour-saving device for the harried critic, its provocatively sellable 25-words-or-less concept handily reducing criticism to bare surface description plus an appropriate adjective. “Gripping” was the mot en vogue for the appreciative critical ranks filing out of my screening of Lebanon, which took the Golden Lion in Venice before screening at numerous fall festivals, including Toronto, New York, and Vancouver. Value judgment aside, Samuel Maoz’s day in the life of a rookie Israeli tank crew during the 1982 invasion is certainly clenched tight by its aesthetic crux/marketing tool. Confined, as the advance notices breathlessly recount, to the tank’s oily, compressed and clanking interiors, Maoz’s camera only ventures outside via the gunsight’s crosshaired view, making each gander a potential fatality. Camera-as-weapon, literalized: the idea is so cleverly airtight that one need only screw it shut and present its lifeless, perfectly preserved remains for admiring inspection.

Venice prize and all, Lebanon is merely this year’s model of the pre-sold gimmick film that reduces the actual viewing experience to a confirmation of the press book. The many rapturous reviews the film has received exude that grateful feeling that warms the cockles of the critic’s heart when skin-deep novelty is put in the service of safely road-tested cliché. Derived, inevitably, from Maoz’s own combat service—the irrefutability of personal experience providing a perfect sheen of prefab authenticity—Lebanon briskly doles out its designated roles: the officious commander out of his depth, the griper and wiseacre, the fresh-faced kid at the wheel, the untried gunner and director/viewer surrogate, and the hard-bitten, no-shit CO of the accompanying paratrooper unit, who notes that as the use of white phosphorous bombs is banned by human-rights conventions, they shall now be referred to as “flaming smoke” (cue tongue-clucking and head-shaking from the conscientious audience).

Our moral orientation points duly established, Maoz proceeds to hit every expected combat film beat, with competence if not much else. The cheerfully waving older gentleman in a chicken truck who pays the price for our gunner’s inability to pull the trigger on an earlier carload of “terrorists.” The beautiful, traumatized wife of a husband and daughter blown to pieces during the Israelis’ battle with two masked gunmen, stripped of her burning dress by one of the ground troops to add a tantalizing dose of sexual humiliation to bloody tragedy and, naturally, a finger-wagging object lesson in our complicit voyeurism. The dutiful return of the sex-and-death combo in the predictable lull before the final storm of steel, as one of our boys recounts how the consoling embrace given him by his bosomy teacher upon informing him of his father’s passing inspired feelings rather different than remorse. End run to the de rigueur ambush and a concluding double-barrel blast of verbal and visual irony, and the audience can trot home safely, superficially shaken if not enlightened.

Of course, what’s supposed to revivify these leaden conventions—or archetypal situations, one’s mileage depending—is the calculatingly literal-minded confinement of movement and vision dictated by the stifling interior of the war machine. With one smartly executed conceptual stroke, Maoz scores not only a built-in guarantee of claustrophobic, sweltering “realism” as his men sweat, swear, and fleck spittle at oppressively close proximity, but a coup of viewer reflexivity in placing the audience’s eye behind the gunsight and the trigger. An exceedingly clever idea in its utter simplicity—so clever that Maoz need only let it be there, incessantly, rather than actually do anything with it. Such ostentatious disruptions of stylistic norms (at least in foursquare narrative films such as this) can only maintain their effect on an audience for so long before normalization sets in. The impulsive recoil and impalpable intake of breath elicited the first few times those crosshairs alight on those in the visually delimited world outside the tank soon subsides. And with it goes any accompanying moral introspection or experiential anxiety; indeed, in all of the praise bestowed on the film one detects a certain note of self-congratulation for the writer’s ability to be so viscerally affected.

Ultimately, the complicity that Lebanon’s ocular conceit is supposed to arouse in the viewer is the very thing which keeps us at a safe distance. Sam Fuller’s hallowed name has been duly trotted out to bestow his posthumous blessing on Maoz’s cleverly calculated enterprise, both for its “grittiness” and for actually carrying out the kind of daring conceptual venture that Fuller supposedly yearned to undertake, such as a Rope-like Vietnam film where nine cameras would execute nine successive ten-minute tracking shots to follow an infantry platoon through the jungle. Leaving aside the thought that it may be just as well that this remained a fantasy, one must at least concede that Fuller’s blunt-fisted (or ham-handed) fracturing of conventional cinematic grammar in The Steel Helmet (1951), Fixed Bayonets (1951), China Gate (1957) et al. reflected a desire to find a more honest aesthetic access to combat.

Tellingly, Fuller’s honesty was not at all necessarily synonymous with that surface realism which has remained the presumed gold standard for war films. The path from All Quiet On the Western Front (1930) to A Walk in the Sun (1945) to Platoon (1986) to Saving Private Ryan and beyond is not a progressive movement towards the “truth” of combat, but merely iterations of the same limited equation of truth with the physical reality of blood, sweat, exhaustion, and pain—a “reality” always conditional on the ideological and content restrictions (and special-effects budget) of its respective era. “For moviegoers to get the idea of real combat, you’d have to shoot at them every so often from either side of the screen,” said Fuller; prevented from doing so, his odd, clunky formalism hit the standard-issue methods, motifs, and pieties of the conventional war film at radically askew angles. Fuller’s films are “truer” because they challenge and undermine the images that have been created to signify “war” on the screen, attacking the norms of spectatorship as a second-best option to attacking the spectators themselves.

By contrast, Maoz’s well-turned and tightly packed conversation piece merely unseats stylistic norms the better to strive for the same old unrealizable—and thus inherently disingenuous—realist goal. “I want to expose war as it is, without all the bullshit around it,” familiarly proclaims Maoz, but Lebanon’s first-person-shooter aesthetics merely replace one comforting moral framework with another: having been placed so thoroughly “inside” combat, the viewer can now safely think they “know” it. Pure affect, a visceral nerve-wringing undergone from the safety of the theatre seat, crowds out any kind of Fuller-style interrogatory initiative—a crucial problem for a film that, presenting itself as unvarnished truth, is being enthusiastically flogged worldwide as part of Israel’s image-enhancing cultural offensive.

Many have already had at Lebanon as a whitewash of Israeli motives and actions in the 1982 invasion, while others have hailed it as an indictment of Israeli foreign policy, both sides often citing the same cherry-picked scenes to support their respective assertions. More than any ulterior ideological motives on Maoz’s part—who sounds a fairly critical tone in interviews—it’s precisely the film’s ability to fit with either argument that defines both its political and artistic failure. As so often, the ostentatious flaunting of authenticity allows the film to be removed from the very specifics it seeks to document and made a moveable signifier for any number of positions. War is hell, and killing is horrible, and tanks are hot, says Lebanon, and left and right, pro- and anti-war, pro- and anti-Israel can all agree. For all its grim purposefulness Lebanon is aimless and adrift, its rigorous fidelity to its central gimmick—and ultimately it is nothing more than this—effacing any true contemplation of the experience, or the representation, of combat. What to do with these frictionless, impenetrable films whose narrowly defined perfection is their obscenity?