Christoph Huber/CS45, From The Magazine, Spotlight 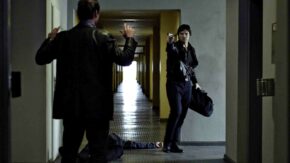 “Soccer has to be generous with the viewer.” Thomas Arslan once quoted César Luis Menotti’s “harsh criticism of boring efficiency-football,” adding, “Actually also a fine dictum for filmmaking.” Arslan’s own work is a perfect example of that spirit, which may be one of the reasons he’s been somewhat neglected, especially internationally, even while being one of Germany’s finest and most reliable directors for over one-and-a-half decades, since his Kleines Fernsehspiel feature debut Turn the Music Down (1994) (two-and-a-half, if you count his early shorts). Arslan’s precise, alert, unagitated, and more often than not close-to-perfect films have an unmistakable, discreet beauty that resists commodification, even within the context of festival cinema. Hence, In the Shadows, the typically short, dry, yet resonant title of his newest film, seems all the more perfect. One of the finest genre pictures of the year, it still feels curiously underexposed since its Berlin premiere in the Forum, from whence it towered over all other German entries. (Clearly, it should have been in competition, and rumours circulate that it was considered, only to be replaced at the last moment by Oskar Roehler’s historical disaster Jew Süss—Rise and Fall; true or not, the mere fact that this is easily conceivable is telling enough). The relative lack of attention is all the more startling as Arslan is one of the key figures for that dubious but commodifying coinage “Berlin School,” having studied at the Berlin film academy dffb from 1986 to 1992—around the same time as Christian Petzold and Angela Schanelec, the trio commonly considered as “founders” of this low-key German film movement (which actually never was founded, unlike, say, the New German Cinema of the ‘60s which followed the Oberhausen Manifesto).

Although an Arslan film is immediately recognizable, during his career he has made a point of defying categorization, a factor that may have contributed to his strange neglect. “With every film I’ve tried to do something new and rise to new challenges,” he says apropos of In the Shadows, something that is confirmed even by a quick glance at his regrettably small output of the past decade. The son of a Turkish father and German mother, Arslan grew up in the Ruhr town of Essen, with an elementary-school stint in Ankara in between. A Fine Day (2001) closes his “Berlin trilogy” about the lives of children and grandchildren of Turkish immigrants. An intimate, terse, and tender study of a day in the life of a young actress and dubbing artist, A Fine Day is a supreme example of Arslan’s casual art: focusing on everyday and seemingly insignificant details—a gliding movement through a subway passage, the looks exchanged strolling around a sun-flooded park or a backyard, the sounds of steps and garments rubbing on each other during these near-somnambulistic movements, the decisive little gestures accompanying conversations—it nevertheless conjures an exacting and complex portrayal of the protagonist’s emotional insecurity and perspectives on life. The follow-up From Far Away (2005) is one of Arslan’s occasional documentaries, an almost wordless, wonderful portrayal of his journey through Turkey from West to East in early summer, searching for fresh images of the country that defy the usual clichés. Subsequently, in Vacation (2007), Arslan delivered a luminous, quietly melancholic study of the inner workings of a bourgeois family. In the Shadows represents another U-turn: a tight gangster film, nothing short of masterful in its seemingly paradoxical combination of abstracted genre tropes and concrete spaces.

The obvious cross-references here are Jean-Pierre Melville and Andy Warhol. Even though Arslan has little interest in mythological transfiguration, the tacit precision in his direction of covert operations and criminal activities, “the mechanics of the profession” per Arslan, almost inevitably conjure that great French fabricator of American- and Japanese-tinged myth through crime-picture patterns, not least for the comparably cool, detached tone. The Warholian kind of cool has been noticeable since some of Arslan’s early shorts and resurfaces in In the Shadows both in the way space is constructed in minimal units (a confrontation can be resolved in three quick setups: door—corridor—intrusion) and in a documentary conception of how to treat places. Arslan emphasizes the importance of their connection to the characters and their actions: “They shouldn’t be just a backdrop selected for visual production values, but have their own presence. Thus we respected the topography of the city, and hardly changed anything for filming, aiming for a documentary sense of place, and opening what you could call a window to the world, which would not be possible through following genre patterns alone.”

From the opening shot of a neon-illuminated Berlin street under the credits—tiny smears of colour suggest the camera is placed behind a glass shield, which is characteristic of the subtle stylization employed—director of photography Reinhold Vorschneider works little digital wonders with the Red One. Arslan initially wanted to shoot on film, but had to reconsider for economic reasons, and admits the results are very satisfying. Indeed, the look of the film is remarkable, even slick, but never in a showy way—the convincingly captured milieu guarantees a grungy grounding, anyway. Similarly, Arslan’s stripped-down approach may well deserve the epithet “masterly,” but only in the modest sense of such acknowledged forebears as Irving Lerner or Don Siegel, whom Arslan cites as an influence for his preferred style of laconic, almost “neutral” acting he likewise admires in Hollywood films of the ‘30s, rather than Bresson or Huillet/Straub. As In the Shadows is enjoyably free of postmodern pretenses, these influences are only meaningful with regards to the film’s superbly sustained tone, as is the case with the acknowledged literary exponents, including Richard Stark, Dan J. Marlowe, and Garry Disher, whose “interior views of criminal daily routine and existence” deliver the kind of condensed genre work that fascinates Arslan. Consequently, the plot per se is almost negligible: it’s a heist classic, immaculately executed. Criminal gets out of prison, gets involved with old acquaintances and sets up to pull off a new job. Corrupt cop and former boss intervene, resulting in various stand-offs.

Once more, it’s not the what that counts, but the how: Arslan employs the same no-nonsense approach as his protagonist. As a gangster story, In the Shadows is brisk, efficient, and captivating in an unpretentiously subdued manner—every action is presented with utmost clarity, and the short, believably handled bursts of violence register all the more forcefully as off-hand explosions amidst the general calm. Meanwhile, Arslan generously allows the particulars to acquire a sensational impact over the viewer, whether wholly abstract such as the play of light, or through the marvellously controlled, musical rhythms; Arslan has always been outstanding in choreographing counterpoint-movements of stillness and motion. There’s an enjoyably unfashionable insistence on little gestures that give character detail (the cop’s encroaching nature expressed in the way he picks food of the gangster’s plate), or on exploring non-spaces rarely seen nowadays (a rundown motorway restaurant, the empty parking lot behind an IKEA as a heist setting). It’s all effectively underplayed by a fine ensemble, including Uwe Bohm, Hanns Zischler, and the down-to-earth, yet charismatic lead, Mišel Matičević, who connects In the Shadows to another German genre highlight of the year, Dominik Graf’s TV-miniseries magnum opus In the Face of Crime; In the Shadows’ socioeconomic allegory suggests a kinship to the astonishing death-of-finance finale of Christoph Hochhäusler’s remarkable The City Below. Released into the cold, amoral world of contemporary capitalism, Arslan’s protagonist regroups into its (mirroring) shadow zones. Although the director says that the heist sum of 600,000 Euros was simply chosen in order to remain realistic, it seems hardly a coincidence that it is slightly higher than the budget of In the Shadows itself.