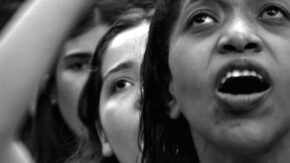 “The film’s theme is those smiles, that shared gaze. This film truly speaks to me about a relationship, a friendship between two people: one in front of the camera, and the other behind. The director is not onscreen, but he is revealed through those images, those smiles, those looks of the characters. And you can see, between the lines, the meaning of this relationship. Beyond the ethnographic document, and whatever multiple perspectives I have on it, the film I end up watching is this: the account of a friendship that builds up all through the filming.”— José Luis Guerín on Nanook of the North

It’s no coincidence that the opening image of Guest registers an obscured moon as seen from a moving train: everything in the films of José Luis Guerín is informed by the twin symbols of filmmaking’s inception—Méliès’ moon and the Lumières’ train—and their subsequent tendencies toward fiction and documentary. Deliberately “dipped in monotonous grey,” Guest name-checks Maxim Gorky’s premiere encounter with movies, a now charmingly antiquated sentiment about cinema as a kingdom of shadows that nonetheless confirms its intrinsically spectral nature. That Guerín is keen to employ cinematic allusion may seem woefully academic, but his body of work evinces a rigorous, playful, and profound execution of its irreducibility. Namely, that cinema, however modern, is subject to a state of eternal return, forever enclosed by its precedent of process.

In In the City of Sylvia (2007), Guerín used the figure of a forlorn lover in delusional pursuit of a phantom woman as an expansive surrogate for the act of looking and its discontents. With Guest, a documentary by name and substance (no pretense of incidental fiction here), Guerín takes advantage of his status as a guest on the incessant film-festival circuit to turn his gaze upon that which is happening beyond the pageantry of the festival. Unlike in In the City of Sylvia, the POV is undoubtedly that of the director, initially fixed on the winged lions of Venice, rolled into place by festival hands while the director cavorts with his beautiful actresses in a hotel room. The expectation—a notion typically undermined by Guerín’s methodology—is that the documentary proceedings of his travelling actors may afford a curious counterpoint to their previously assigned narrative roles, and between these may open a fortuitous conceptual ambiguity driven by the forces of contingency. Or, similarly, that the film festival is a parallel universe: detached from reality and more fictional than the sum of its constituent narratives.

Not bad conceits, though they’re quickly disposed of by another, which finds Guerín taking to the streets, often public squares in South American cities (where Spanish colonial legacy is still met with popular residual resistance), to allow subjects to appear to him: poets and portrait-makers, evangelists and soldiers, musicians and vendors. Without a script or clear agenda, avowedly “open to all encounters,” Guerín amasses footage and waits for enduring signs from the social margins. The “latent revelation” he may not necessarily seek but unwittingly finds: misery loves company, especially when it travels with a camera.

Implicit, of course, is that the film festival is irrelevant to the lives of its poorer inhabitants, a fate that the festival-bred Guest, however well intentioned, cannot itself escape. While In the City of Sylvia contained a critique of its own voyeuristic tendencies, Guest attempts to maintain an ironic position with regard to its privileged line of inquiry. The punctum (to use a term favoured by Roland Barthes in relation to photography, as that which “pierces” the viewer) to Guest’s touristic approach is derived from the casually reproachful presence of certain subjects. In Havana, Guerín records a bored teenage girl who is not impressed enough by her “guest” to budge from her bed, yet whose interrogative address “Do you have a home?” awakens the film to a recognition of its implied provider of content, the host. That Guerín’s lodgings are luxurious is a disparity registered in her look of politely withheld disdain, something the director is wise not to omit from his finished product (her assessment of Titanic as “sad” furnishes Guerín with the regrettably sententious consolation “Isn’t life sad?”, which only confirms just who the more astute critic is).

The sense that the film is composed of insights gleaned by Guerín’s diaristic peregrinations inevitably invokes questions of agency, whereby the autonomy of his subjects exists only by dint of representation, which is itinerant at best. Paradoxically, the further afield the film strays, and the more stories it accumulates, the more ineffectual and diluted it becomes. In Lima, a street vendor of chocolates competes with a barking proselytizer for customers, but he laments that even with Guerín’s camera in tow he can’t drum up sales. (“You’re filming but nobody’s buying,” the man shrugs.) Later, in his home, it is revealed that most of his family has perished at the hands of Shining Path, a reality that threatens to overwhelm the quality of concern extended to such portraiture.

It’s easy to subject Guerín’s project to that fundamental critique, levelled at any documentary practice, of an aestheticization of suffering, or more vernacularly, mere slumming. The problematic aspect of Guerín’s undoubtedly humanist agenda seems more a matter of scope and the limits of what it can accommodate. In rural Colombia, Guerín fixes his camera on a woman hanging laundry and concedes that he would like to make a recording, a “short portrait” of her, to which she demurely smiles while staring back into the camera. It’s a radiant moment, which Guerín indiscreetly seizes by framing her in an old-fashioned iris, typical of silent film. Cut to another day, as Guerín assures her that in his film she will play herself, and “your neighbours would be your neighbours.” In an opportunistic moment the women are seen discussing the difference between documentary and fiction, but the reality is that soon they will be moving, and their neighbours will no longer be their neighbours. “Not here,” the woman exclaims, effectively shutting down the potential for Guerín’s extemporaneous mise en scène to go where it pleases. It’s the actuality of displacement that the film’s schema can’t abide with any measure of sustained fidelity.

Guerín’s above-quoted treatise on Flaherty offers up a curious insight in relation to Guest: the director is revealed through its images, through the look of its characters. But what, ultimately, is revealed of them? This incommensurable gap between them constitutes Guest’s impasse. The reciprocity implied in the “shared gaze” is here taken for granted, and it is in stark contrast to the gravity of certain socio-economic realities that Guerín’s ruminations on cinematic affect feel weightless. Among them is the director’s symbolic notebook, once a mere blank canvas, its pages filled with ideas and flickering film-like in the breeze; and the recurring invocation of Guerín’s work as hewing neither to fiction nor documentary but existing in a transitive state, a distinction scarcely exceptional in the ever-mutating film climate.

To identify Guerín as a global flâneur would be unfair, of course, as Guest entails an act of commitment that mercifully refuses to indulge the pomp and vacuity that practically defines the branded film festival (which is more than André Bazin could claim in his essay “The Film Festival as Religious Order,” in which he savours the opportunity to describe the ritual cocktail hour). Guest instead traffics in its own share of lyricism, some of it typically luminous. Another street scene in Lima captures an incessant volley of vendors and carriers; it feels like a vintage Magnum photograph brought to teeming life. And the film’s spiritual destination—only natural considering the ubiquitous evangelists on display—finds Guerín in a car headed for Jerusalem. Here he tags along with Palestinian boys eager to show him their former schoolrooms, now wasted and vacant. One boy, a quite sympathetic character, wants to know when the film footage will be televised. Guerín’s response of two years is understood to mean two o’clock, a misunderstanding that speaks directly to the film’s paradoxical project. Is it a reassuring disparity or an irreconcilable difference? That the director should take credit for the resonant ambiguity would be bad etiquette indeed.