Andrew Tracy/CS45, From The Magazine, Spotlight 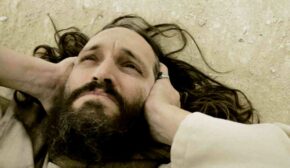 One of the more interesting of the teapot tempests that erupted at Toronto this year was the slightly botched press screening of Jerzy Skolimowski’s Essential Killing, assigned to a noticeably low-capacity theatre that left several clamouring journalists shut out. What’s interesting is not the habitual logistical miscalculations familiar to any festival, but rather the eagerness, and subsequent distemper, of the press pack (one could hardly call them a horde) to catch this particular item. While Skolimowski’s recent return to prominence with Four Nights with Anna (2008) and his new film’s two awards at Venice would certainly mark it out as an item of interest, one could scent an enthusiasm that went beyond fest-circuit obligatory viewing—something akin to the chop-licking expectation that attended last year’s Bad Lieutenant vu par Herzog. If Four Nights with Anna was a waxworks resurrection of the enigmatic art-house film, Essential Killing is the high-toned freak show: the conceit of an almost entirely wordless chase film (with all those breathless incantations of “pure cinema” waiting in the wings) combined with the presence of a bearded and burnoused Vincent Gallo as a Taliban fighter is the kind of stunt that a certain segment of the press corps finds irresistible, no matter what they end up thinking of it.

Essential Killing opens on an aerial view of an arid, rocky landscape and a comparably rocky dialogue track: two American soldiers (or mercenaries? As will be Skolimowski’s strategy for the rest of the film, the exact identities and functions of the onscreen figures remain unexplained) traipse through the landscape in the company of a guide and an accompanying helicopter, their profanity-laden back-and-forth a tin-eared approximation of banal America-speak. As the men’s unspecified mission takes them into a narrow pass, and out of sight of their airborne support, another figure, clad in white robes and with a scarf covering his face, enters the scene. Running ahead of the recon party, his adrenaline-charged panting filling the soundtrack, the man secretes himself in a dark cranny and arms himself with a rocket launcher. After a mildly suspenseful if rather protracted build-up, the scene concludes as it must: a plume of flame, a shower of dust, blood and body parts, the aggressor (or aggressed) on the run with a fleet of whirlybirds in pursuit, and the predator/prey duly snared.

Removed to a US-run detention centre, the man—now clearly bearing Gallo’s rodent-sharp pan (and, apparently, the name “Mohammed,” though this unilluminating scrap of info is not parsed out until the end credits)—is subjected to the full Gitmo menu of physical, verbal, and mental abuse before being clapped in irons and shipped off with other detainees to destination unknown. Shunting, with predictable contrasting effect, to a snowy, tree-covered landscape, Skolimowski orchestrates a fortuitous escape for our protagonist courtesy of an oblivious pig. After a bloody ambush of two unwary soldiers, Mohammed equips himself with the bare essentials to endure his frosty surroundings and sets off cross-country, a hastily organized but impressively large manhunt close behind.

And such is the film for the remainder of its commendably brief (if not tight) 83-minute running time: a calculatedly simple survival story, bones ostentatiously bare. Apart from some rather risible, hazily coloured dream sequences/flashbacks of Mohammed at prayer, a beautiful, burqa-clad woman (his wife? Doesn’t matter), and voiceover exhortations to jihad, Mohammed remains an intentional cipher and pre-packaged existential object, a figure in a landscape (to borrow the title of Joseph Losey’s comparably abstract cum pretentious allegorical chase movie from 1970) whom we are to know only through his actions. Predictably, those actions elicit a varying spectrum of viewer response, the natural visceral empathy accorded Gallo’s desperate and resourceful fugitive complicated by the occasionally gruesome brutality he resorts to in his quest for survival—the dog-killing is practically de rigueur for these on-the-run exercises, but things get messier, literally and morally, when Mohammed indulges in some nasty bits of business with whatever implements come to hand (Skolimowski abiding by the Chekhovian maxim that a chainsaw introduced at the beginning of a scene had best come into play by the end). Occasionally the director opts to leaven the grim mood with some straight-faced absurdism, to variable effect: a single-take, medium-shot sequence depicting the theft of a fish wrings some earned chuckles, but a famished Mohammed’s encounter with a stocky mother and her infant suckles contrivance at the breast.

Yet such standard critical gauging of the effective versus the in- feels like a rather hollow exercise when the whole itself is hollow. The studiedly meticulous realism, the detailing of the minutiae of survival, matters naught when the film contains its negation at its very centre. To wit, while Gallo executes the almost entirely physical performative tasks assigned him with agreeable dispatch and, occasionally, some shred of inspiration comic or otherwise (the fish theft), his own onscreen work is instantly invalidated by the offscreen image he cannot help but carry with him and the viewer—particularly the privileged fest-circuit viewers at that overflowing press screening—cannot help but be aware of. Whatever Gallo’s qualities as a performer, verisimilitude cannot be said to be among them. Long before Skolimowski drops in some particularly weighty, late-breaking discards from the symbol-monger’s rag-and-bone shop—that absurdist pièta, a mute woman (Emmanuelle Seigner, hélas! Or perhaps bien sûr) who offers succour and a noble steed trotting through a frozen dawn, its pure white flanks stained crimson—Gallo has already become a constant reminder of the fabrication of the onscreen action, all its realist bona fides aside.

If we may be generous enough to briefly allow that such perhaps is precisely Skolimowski’s intention, we must be vigilant enough to ask towards what purpose this hypothetical intention is put. Gallo’s cultish notoriety might very well make him a walking Brechtian effect, but Brechtianism works towards a definite end; there is nothing in the film’s strategies that offers any new openings onto a situation which most of us still cannot fully comprehend. Further, a determination to “bare the device” hardly sits comfortably with the heavy sauce of symbolism Skolimowski ladles on in the film’s last third—unless one wishes to claim that the very use of these creaky devices is another of the director’s unveiling gambits, in which case we can all just keep going down the rabbit hole ad infinitum. (There are far too many worthy things on the cinematic earth to spend our time dreaming on such unrewarding philosophies.)

Occlusion, indeed, seems to be much more Skolimowski’s speed here. Skolimowski has cannily pitched his project between the poles of the timely and the timeless: a bit of up-to-the-minute frisson in its interpolation of a charged political situation, and a defusing of the sticky questions that always accompany fabricated depictions of those situations by reducing it to the immediacy of the physical (or the “elemental,” or the “eternal”). Gallo’s casting signals the strategic compromise at the film’s core, the exploitation of the moment allowed to escape its earthly bonds (and its consequences) on the metaphysical wings granted by (semi-)stardom. Whether the film would have felt any less calculated had Skolimowski cast an unknown in the lead—In This World (2002) by way of The Fugitive (1993)—is worthy of speculation, but it is hard to conceive of the film existing without the presence of Gallo (or that of an equivalently cultish figure). Quite literally, Gallo is the only reason to see Essential Killing, and it’s that which guarantees the film’s blessedly quick fade from our ever more cluttered horizons.