Mark Peranson/CS45, From The Magazine, Spotlight 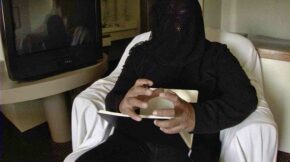 The contemporary rebirth of the documentary is surely a reaction to the failure of the media to engage in proper investigative journalism (WikiLeaks aside). But most of these newly celebrated works—far too obsessed with content over form—fail to distinguish themselves aesthetically from the television they seek to one-up. The point at which an investigative documentary becomes art is surely a key issue in discussing current cinema. I can’t hope to resolve the matter here, only to argue in favour of a creative way of treating reality, grounded in a self-reflexive presentation of material. Filmmakers can only benefit from questioning the methods that are being used to record reality, inviting viewers to become part of a process that transcends the informational. We need more documentaries that don’t just show or document reality (or “truth”) but construct a new construction.

Gianfranco Rosi’s El Sicario Room 164, a talking-head film with a hidden face, employs just such a rhetoric. In an armchair in a Ciudad Juárez hotel room sits an anonymous ex-hitman for Mexican narco-traffickers, a so-called sicario with a contract on his head since he left the cartel and spilled all to Charles Bowdin in a Harper’s article in April 2009. Indeed, a synopsis of El Sicario creates the expectation of something like an investigative report that used to be found on 60 Minutes (or, generously, The Fog of War [2003], Inside Job, or any Oscar-winning documentary). The sicario speaks over one long afternoon, his story punctuated by time-eliding cuts to black and shots of anonymous exteriors (the Juárez cityscape; a possible cartel safe house; a night-time tracking shot behind a police car). He tells a jaw-dropping story of drugs, women, and murder, a black-market capitalism gone wild with its own ethical code—a story not entirely new, but one that gains force by being told by a willing participant. It yields a guilty appreciation for the staggering organizational complexity and vast outreach of the cartels, for the precision (the sicario’s detailing of the division of labour is impressively elaborate) and brutality the human mind can develop in pursuit of money and power.

Yet Rosi intelligently moves his film beyond a document of horrible deeds into something truly discombobulating by the employment of some very basic devices of mise en scène. First, the black hood over the sicario’s head, which we see him donning in an initial shot; second, the unexplained penchant the sicario has for drawing pictures as he speaks, filmed either head-on, with his notebook on his lap, or over his shoulder; and third, scenes where the sicario rises from his chair to recreate events that transpired in Room 164. Actually shot over two days (one long session, a second shorter “reshoot”), Rosi’s ideationally dense, minimalist adaptation—superlatively subtitled—darts between journalism and fiction, often within the same shot, negating any effort to claim primacy for one or the other. In doing so, it makes the brutal details the sicario relates in some way graspable, without pretending to be able to comprehend them.

i. The hood. The sicario’s hood is a necessity—because he quite literally knows where the bodies are buried, he can’t show his face—but also an alienating device that tilts the film towards a kind of anti-cinema, denying viewers the opportunity to look into this man’s eyes, to judge for themselves his reliability. The film’s minor controversy is that with the sicario’s identity hidden, and thanks to the almost impossibly erudite manner in which this police academy-educated hitman holds forth, viewers might reasonably doubt the verity of Rosi’s enterprise. When challenged at a screening in Vienna, Rosi’s response was that, at a certain point, you have to trust others at face (in this case balaclava) value. The audience member persisted in her doubts, and Rosi responded: “How do you know your mother is actually your mother?”

Defending the truth may be beside the point—I, for one, never doubted a word—but “trust” is itself the film’s theme. The story that the sicario narrates is one of trust: between himself and his patron, the other members of the cartel, between the drug barons, the police, and the local (and federal) governments of both Mexico and the US. Just as important as money, trust is what holds this system together, and a breakdown of trust is in fact what ironically ignites the sicario’s third-act transformation into a man of faith.

ii. The drawings. Bowdin writes in hardened, etched prose about the facts, at one point noting the sicario sketching a diagram of the four phases of his life: “childhood, police, narco, god”; later, the drawing of a carjacking is like “an equation on a chalkboard.” Rosi elevates these curious asides to the primary element of his mise en scène, both in terms of the sicario’s process of drawing, brown Sharpie in hand (replacing the green pen of Bowdin’s article—either way, the Sharpie company has grounds to be miffed), and the images themselves. The film thus acts as a counterpoint to the coda of Police, Adjective (2009), which sees its protagonist sketching a street plan of an impending drug bust. Corneliu Porumboiu’s allusion was to storyboarding, and this is exactly what the sicario is doing, albeit in a cruder manner, situating himself not only as a storyteller, but as a filmmaker.

(More so than Police, Adjective, the film that came to mind when watching El Sicario is the still relevant Chambre 666 [1982], wherein Wim Wenders set up a static camera in Room 666 of the Hotel Martinez during the 1982 Cannes film festival and asked filmmakers like Godard, Fassbinder, Herzog, and Spielberg the question: “Is cinema a language about to get lost, an art about to die?” It’s no coincidence that the directors are framed, like the sicario often is, next to a television set.)

Many of the sicario’s sketches are fascinating even while being perfunctory: besides giving his “thick fingers and large hands” a vehicle for displacement, the diagrams help and, at times, undercut the way viewers create pictures in their minds based on his words. From time from time, they are startling. One drawing illustrates a particularly dastardly form of torture: placing flaming blankets on victims’ naked bodies and then removing them, ripping off three layers of skin in the process. To read about such an act (mediated by Bowdin’s authorly interjections) is one beast, but to hear it spoken aloud while being illustrated by means of two Don Hertzfeldt-like stick figures covered by rectangles is another.

iii. The re-enactments. Even though we might assume the sicario thinks he’s relating something like an accurate depiction of his crimes, the presence of Rosi’s camera complicates matters; the two combine to create a catalogue of absurdity, which removes us from any kind of identification or seeing the enterprise as a “journalistic” presentation of the events. This is taken to its extreme when we see the sicario, sans notebook, reenacting a kidnapping and torture. Here the sicario directs his own scenes, pretending to shove his “patient’s” head into a bathtub half-filled with water, lecturing him on the toilet seat, or, in an inspired bit of showmanship, talking on his cell to el patron (hand raised, thumb and chunky pinky outstretched, to his ear), who demands the prisoner be kept alive—though by then, he has lost consciousness and cannot be revived as the sicario’s “work was advanced.”

But it is perhaps the sicario’s last act which is the most controversial, and theatrical—his action sequence recounting his eventual escape from la vida loca (after being demoted from torturer to car washer once he quit drinking and drugs after trying to strangle his wife in his sleep) and religious conversion at a megachurch. He flails about, hands in the air (like “a queer”), then collapses to his knees, sobbing, testifying that, with God’s help, he will begin a new life—can this be read as a parody of the idea that documentaries are able to provide revelations? Not coincidentally, the charged etymology of sicario traces back to Roman Palestine, where a Jewish sect, the Sicarii, used concealed daggers (sicae) to murder Romans and their sympathizers. One theory holds that Judas was a Sicarii (hence, Iscariot), but the most famous Sicarii were those who holed up on Masada, martyrs who killed themselves for their love of God rather than live under Roman tyranny. That mountaintop fortress, just as much as an anonymous hotel room, is where El Sicario is set, the film ending with the sicario having moved from serving an earthly master to a higher power.