Christoph Huber/CS43, From The Magazine, Spotlight 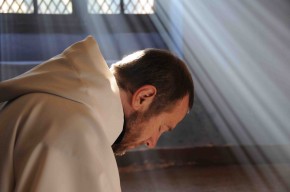 Of the handful of promising filmmakers to emerge from France in the ‘90s, not many have withstood the test of time. While quite a few contenders seemed to disappear from view during the last decade, the star of Xavier Beauvois, who debuted in 1991 with the impressive semiautobiographical family drama Nord, has been rising steadily—and deservedly. While his third feature, the class-conscious amour fou tale Selon Matthieu (2000) didn’t have much of an international impact, Beauvois’ superb, slightly neurotic policier Le petit lieutenant (2005) turned out to be the biggest success of his career, despite having been snubbed by Venice competition. And at Cannes 2010, his marvelous, meditative monk movie Des hommes et des dieux became a critical favourite and won a justified Grand Prix, 15 years after Beauvois’ somewhat more controversial sophomore effort (and Jury Prize winner) N’oublie pas que tu vas mourir (1995). One of the reasons for Beauvois’ durability is undoubtedly his classical bent. Steadfastly rejecting stylistic fads, which are “doomed to go out of fashion again soon,” he has drawn on “naturalistic” modern and classical inspirations to forge his own kind of existential cinema. Cassavetes and Rossellini serve as his twin deities—their pictures hang on his office wall—but with most of the Cassavetes-love this year going, not entirely without reason, to Mathieu Amalric’s likeable neo-burlesque extravaganza Tournée, Beauvois seems to have come down on the Rossellini side of things. With its spiritual bent, its clear-eyed take on the price of freedom, its interest in harmony between man and nature, and its insistence on the quandaries of conscience and belief, Des hommes et des dieux shows certain undeniable affinities to Rossellini—although other sources of transcendental style come into play as well.

Reconstructing the case of the Tibherine monks—who were allegedly abducted and killed by Islamic fundamentalists during the Algerian Civil War in the mid-‘90s (although recently declassified documents point to the Algerian Army as the guilty party)—as a drama of belief as well as an immersive experience, Beauvois nevertheless manages to score with the secular camp as well. One reason must be his decidedly commonsensical approach; he’s at pains to distinguish between religious commitment and its abuse by extremists. Another is the astonishing formal dexterity with which Beauvois constructs his argument, working its way from a general concept of love and compassion towards its dutiful application, however hard, in a concrete situation; this gives the film a strong emotional pull. Despite its strong spiritual dimension, I couldn’t help flashing back to an interview with Beauvois at the time of Le petit lieutenant, when I baffled him with a question about his use of ceremonies in that film, which seem to act as an existential anchor, yet an ultimately useless comfort against loneliness. After opening optimistically with the title hero’s graduation at a provincial police academy, all subsequent rituals (and ritualistic congregations) in Le petit lieutenant become announcements of loss and death, culminating in two ceremonies that fail to provide solace: abject loneliness at a funeral and dead investigation time at a minutely observed baptism. Pausing for a while, recalling similar moments in his earlier features, and pointing out he isn’t a believer, Beauvois remained puzzled, ultimately admitting he’s never had any personal experience with these kind of ceremonies: “Only cinema has given them to me, not life.”

In a way, Des hommes et des dieux, could be seen as an answer to this quandary, prominently displaying the rituals of the monks as a source of hard-won strength, while doubling as a cinematic credo: It was one of the few Cannes Competition entries that emanated some kind of belief in the (positive) powers of filmmaking. Beauvois’ approach is leisurely by necessity, though no less forceful once the stakes are raised. The opening sequences take their time to draw the viewer into the monks’ world. Living in a monastery in the North African mountains, they interact peacefully with the Muslim locals, selling their Atlas honey on the market, chanting at regular intervals, and farming amidst grazing donkeys (who, take note, Monsieur Godard, are not—and needn’t be—abused metaphorically). Despite the tranquil harmony, the set-up remains unsentimental: the scenes between the monks and the Islamic community, or a few moments showing them giving sage advice to indigenous youngsters, are gentle introductions to themes that will escalate slowly, but mercilessly. Casually, the brothers share their frugal meals, honouring even the smallest potato slice with adequate humility. It’s hard not to be moved by the fragile sight of Michael Lonsdale, who plays the medicine monk, attending to the region’s sick with seasoned abandon, though amongst a strong ensemble, Lambert Wilson’s immaculately introverted portrayal of the community leader stands out, and not just for having the hardest weight to carry. Beauvois pays tribute by arranging stirring visual adagios as Wilson’s monk recedes on long walks, pondering the decision of whether to stay or go in lonely contemplation, even amidst torrential downpours.

The only visible violence happens early, and signals the turn of events: Balkan foreign workers are discovered mutilated and killed. Soon, the monks find themselves in the midst of chaos, but persist in following their orderly schedules. The threat by the fundamentalists presents an ever more pressing danger, forcefully manifested in a guerilla visit to the monastery for drugs, a situation barely controlled by an act of monkish courage, in which an appeal to basic principles of belief and life sparks a glint of mutual recognition in the enemy leader. It becomes increasingly clear to the monks that to follow through on their pledge of brotherhood with all men and stay with the poor will likely mean martyrdom. Meanwhile, the country’s officials also try to get the monks out, mostly to avoid a diplomatic incident, yet they refuse both an airlift and army protection. In a remarkable scene, an official chides them for their Western arrogance and luxuries of privilege—while they’re free to ponder the opportunities of salvation or flight, most people in this country are doomed to dream in vain of escape, and certainly wouldn’t hesitate, given the option. Ultimately, Beauvois gives the thorny decision apposite grace and weight. The process of reasoning includes spiritual, political, and individual arguments, and for all its tragic consequences, is not presented without humour: to stay, one monk reasons with the monk most given to doubts (not coincidentally, the youngest), is no more mad than having become a monk in the first place. Still, the serious subject demands a perfectly modulated construction, and Beauvois delivers by paralleling the philosophical and ethical conundrums with powerful images: One arcing shot of the monks chanting against the noise of military helicopters looming overhead (with a dwarving bird’s-eye perspective countershot) ranks among the small number of indelible experiences at this year’s Cannes.

Showing his unobtrusive skill, Beauvois masterfully recedes into a Dreyerian series of close-ups for the final section. After already having subversively framed a Muslim like a Christian painting, he proceeds to unlock the Da Vinci code for a moving last supper, in which the monks share a meal and wine, while Tchaikovsky’s “Swan Lake” plays from a tape recorder; they beam in spiritual community, despite the visible toll of going through with their resolution to stay. Like Bertrand Tavernier’s mysteriously underrated La princesse de Montpensier—maybe because classic filmmaking schooled on Ulmer, Freda, or Curtiz doesn’t carry the same critical cachet as following Rossellini or Dreyer— Des hommes et des dieux is a film about conscience and the price you pay for following it. Maybe death and transcendence, as in Beauvois, make the pill easier to swallow than Tavernier’s take, which ends in utter loneliness and desolation. But both films are also proud examples of classical style, something that seems no less doomed than the monks. Nevertheless, one should not rule out the element of surprise: What to make of the fact that Beauvois’ ending, no doubt, entirely by accident, recalls the opening of Wakamatsu Koji’s poetic terror-tract United Red Army (2007)?

Posted in CS43, From The Magazine, Spotlight