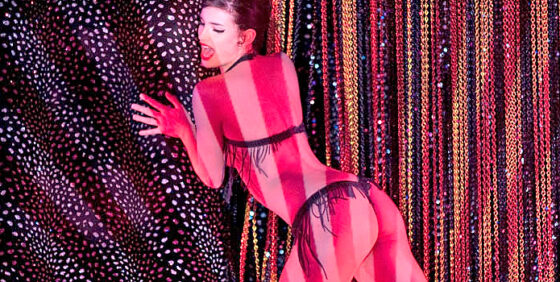 Over the last decade, I’ve realized that Frederick Wiseman devotees are incapable of critical thinking when it comes to their master. They fail to see (or refuse to acknowledge) that in composing his career-long grand narrative analysis, Wiseman sometimes loses sight of the particularities of the institution under observation; at times, he’s been just plain lazy as an editor. To what extent his unofficial status as the chronicler of American life has weighed upon him as a burden I can’t say, but my complaints disappear into the shadows in Crazy Horse, his 39th film, and, for my money, the most entertaining movie he’s ever made. Maybe this has something to do with Wiseman’s differing takes on the American and French nations. Put another way, America for Wiseman is high school, legislature, public housing, hospital, the army; France is the Comédie Française and strippers. (Common ground is found in ballet.) In both definitions of the word, Le Crazy is indeed an institution.

In the press kit for Crazy Horse, Wiseman states he made it because “I thought the idea amusing.” And this is perhaps the best reason to make a film. To be fair, he continues to list other issues that interest him: the difference between cabaret and ballet (again, cabaret, more amusing); the way the Crazy Horse isn’t really vulgar but hints at vulgarity; and, crucially, the topic of erotic fantasy and the body. The club’s legendary opening number, “God Save Our Bareskin,” which Wiseman withholds until close to the end, sees the ladies sporting Buckingham Palace guard bearskin hats and not much else, parading across the stage in near-military manoeuvres. Allowing for some imagination—which is what the film, bracketed by two scenes of staged shadow play, is essentially about—we’re not that far from what Wiseman captured in Basic Training (1971).

After some elegant punctuation scenes that will reappear over the course of the film, taking us either off-stage or out of the club, Wiseman begins the film with a too-lengthy montage of Crazy Horse numbers, most filmed in close-up and too-long takes, most with a bevy of buttocks proffered up to the camera. Trouble, I thought, but it’s a fake-out. Though of course no narration or background is provided, Wiseman is showing us the mostly unsubtle numbers that have been performed at the club for years (such as “Baby Buns”); and judging from a perfunctory 2003 documentary produced by the cabaret itself, which sprints through the entire hour-long show of 15 numbers, Wiseman’s chosen some restrained ones. After this, Crazy Horse slowly finds a convincing structure as it focuses on the development of a new show choreographed and directed by Philippe Decouflé (a trained mime and the brains behind the Albertville Olympics opening and closing ceremonies) titled, in figurative and literal six-foot-high letters, DESIRS.

Decouflé’s charge is to create a dazzling premiere that will “impress the intellectuals,” but is burdened with the need to rehearse new numbers while the poor dancers are performing the old show every night. A seemingly principled and well-intentioned artistic mind, he is wont to expound on the need to “face what creation is about”; in the first staff meeting, we see the classic art vs. commerce battle as Decouflé attempts to convince the managing director, Andrée Deissenberg, to give him more time and resources to realize his vision. (Le Crazy may be an institution, but it’s a private one.) Throughout the whole film, there’s something incredibly charming—Wiseman might say inherently “French”—about the totally irony-free pronouncements about art and legacy when it comes to a chic nude revue. This comes to a beret-topped head when Wiseman reveals his trump card: the flaming “artistic director” Ali Mahdavi, who has seen various permutations of the show 40 times. His Le Crazy obsession follows, chronologically, “Saint-Laurent, Marlene Dietrich, Helmut Newton,” and his motto is “There are no ugly women…only lazy ones.” (I could go on for the rest of this review about Ali, but some things are better discovered for oneself.)

The periodic appearance of endearing lunatics—the put-upon costume designer who describes a tiny skirt as “more elegant, like for a female CEO,” and later delivers the precious line, “You don’t take chances with a naked girl,” being one of them—is one thing that keeps the entertainment value at a high level. But to everyone’s credit, the dance performances convince us that this nude revue is an art on par with ballet, or Bob Dylan or Bono. It doesn’t hurt that, as a friend noted, Wiseman’s HD camera, with cinematography by John Davey, captures the greatest colours seen in cinema since the death of Paul Sharits. Employing a wide array of gels, projections, effects (polka dots, leopard patterns), and front and side lighting, the eye-popping, often narrative numbers at the Crazy Horse are drop-dead cinematic—at times they approach kaleidoscopic op art. Often, all that Wiseman wisely does is let a scene play out in a long take and let the astonishment sink in. The dancers’ bodies themselves are cinematic vehicles, either used to produce shadows on coloured backdrops, or as objects themselves onto which light and image is projected.

Cinema in essence involves the projection of desire, and what Wiseman cleverly does in Crazy Horse is present desire, illustrate its operation and deconstruct it, with the technical rehearsals of the numbers showing the peculiar sweat and effort required to create this seamless illusion. (While arguing with Ali over the grand finale, Decouflé demands, “Can I have an almost naked girl inside the letter?”) Along the way, Wiseman also allows for the intellectualization of desire: pace Plato, it’s important that the dancers are indistinguishable from each other in order to create the ideal conditions for the perpetuation of desire. And make no mistake, as seen in a priceless audition scene, the women are definitely seen as objects, even by their employers (except when they’re transvestites). To drive it home, Wiseman often shoots a scene without allowing for a glimpse of the dancer’s face, preferring a longing gaze at yet another shapely buttock, making for a point of view not only masculine, but cinematic (rather than theatrical). Yet as Deissenberg points out, Le Crazy famously appeals to women and men alike—but maybe women even more. For here, through the fusion of art and eroticism, through frustration and imagination, women are being given more than just “the desire to desire.”

Still, the film could be a little shorter.