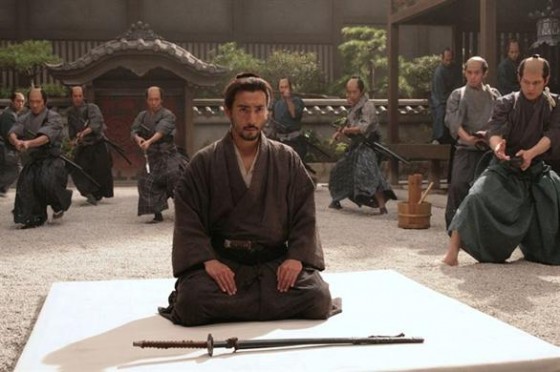 Hara-Kiri: Death of a Samurai

Programmed in typical Cannes fashion as almost overlapping screenings, the double feature consisting of the press show of Miike Takashi’s competition entry Hara-Kiri: Death of a Samurai and the sole Quinzaine “special screening” of Sono Sion’s Guilty of Romance made for an instructive lesson in festival reception. On the most superficial level, which more often than not is the one guiding festival politics (with Cannes gleefully leading the way), this contrasted two Japanese stylists saddled with the easy epithet “cult director” and strongly connected to the “Asia extreme” boom. Whereas Miike is now anointed with A-competition-laurels—as a classicist, of all things—Sono straddles his former territory: a genre specialist with idiosyncratic vision and often excessive touches, especially stylistically. Not (yet, as the example of Miike may show) prestigious enough for the main course, but perfectly suited to spruce up a festival’s parallel section with that sought-after combination of the popular (“wacky”, “visionary,” or at least “idiosyncratic” genre appeal) and the personal (too “wacky,” “visionary” or “idiosyncratic” for some, or even—better, because “controversial”—many, but with strong auteurist aspirations). 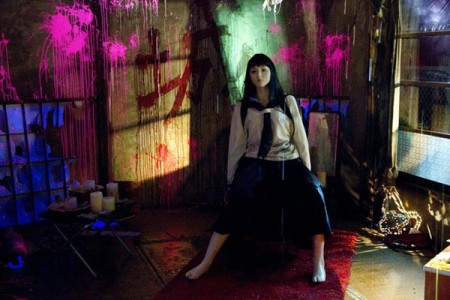 Also to the point, Sono’s Guilty of Romance also provided livelier filmmaking. In the context of Cannes, his two-and-a-half-hour extravaganza zipped by with the usual baroque abandon, even as its centrifugally accelerating Eros-Thanatos roundelay takes carefully calibrated steps while escalating into his preferred mode of insane emotional overdrive. That Miike’s similarly well-conceptualized, if purposefully stately and sombre, remake of Kobayashi Masaki’s masterful samurai drama Harakiri (1962), failed to garner a comparably enthusiastic (if divided) response, had to do with the problems of 3-D, but also with expectations. Coming on the heels of Miike’s brooding update of Kudo Eiichi’s eponymous, underseen jidaigeki classic 13 Assassins (1963), it’s another superbly crafted tribute, if again more streamlined and less complex than the original, though people ostensibly hoped for another action furioso (mystifying considering Kobayashi’s famous template). Instead Miike served a heavy humanist chamber piece bookended by two violent set-pieces, allowing (understandably) another stylist’s showcase to suck up all love for diverting from the tough watch Competition: Nicolas Winding Refn’s Drive, a sleek, sometimes seemingly weightless and amazingly abstract urban US neon-crime koan, which helpfully provided another example of estimation according to expectation levels. Refn’s last film, his masterpiece Valhalla Rising (2009), found a few champions, but mostly alienated opposing critical communities with its fusion of gutsy exploitation and spiritual exploration. On the other side of the coin, Drive offered easy access with a flexibly formalized distillation of Mann-Friedkin-Hill ‘80s gleaming city-thriller tropes: a supple, ephemeral film about weakness, its fluid poetry is much easier to take than the antithetic aesthetic of its predecessor, a grave, thorny meditation about strength.

If Refn’s two films form an intriguing pair of opposing styles and interests, one of the pleasures of Sono’s current epic peak is his steadfast refusal to succumb to any divisions. Has there been a more bipolar run of commercial enterprises than his recent so-called “Hate” trilogy? Even the designation seems characteristically counter-intuitive: “‘Hate’ is the emotion that includes ‘Love’ the most,” says Sono in a press-book interview showcasing his trademark mixture of the cryptic, the bemusing, and the sincere, and that’s not a bad way to approach the films, either. Wildly variegated in subject—from the manic-depressive four-hour relationship rollercoaster Love Exposure (2008) through the cruel social indictment of Cold Fish (2010) to the sex-and-crime saga Guilty of Romance—the films are instantly recognizable as Sono’s. This is less for the unmistakable excess that is the basis for Sono’s reckless orchestration of overwhelming emotions, or the garish and gaudy, shrewdly applied pop-colour palette, but in the dizzying up-and-down slopes of his character’s states of being, which also guide Sono’s remarkable approach to frenetic montage (or its refusal). Love (or Hate) is the drug, and there is no middle ground.

Even the silent, often satiric moments showcase Sono’s attention to detail, as when he introduces Izumi, wife of a famous novelist, whose unfulfilled home life is described mostly via vignettes focusing on suffocating ritual (correct placement of house shoes, closing the door after the daily, well-behaved, noncommittal goodbye, etc.). Taking up a job to fill the void, she quickly enters a dubious modelling career, and soon cruises the red-light district with a female university professor who moonlights as a perversion-prone prostitute, proclaiming freedom in fucking men for money, not love. The third protagonist is a married female cop investigating a murder-mutilation concerning the other two: her story—including a strange extramarital affair—is the ground line of this volatile character triangle. (Per the trades, a much shorter, director-approved “international version” on the Cannes market excises most of her material, probably upsetting the precarious balance.)

Unlike Cold Fish, whose brutal bent was often misunderstood as endorsement in the West (despite its classical ero guro nansensu roots), Guilty of Romance follows Love Exposure’s tendency towards experiential stylization, blowing recognizable feelings out of proportion to ecstatic heights. It’s a sex-and-crime saga as lurid combustion of mangaesque looks, Kafkaesque ideas, and hyperkinetic feelings exploding from existential states too long submerged in quiet conformism, with Sono (home)running on his old turfs: pinku eiga and poetry. For him, overload is not means to an end, but provides shifting centres of reference in a startling labyrinth of ambiguous, even contradictory stories, ideas, and impressions, some more successfully realized than others. Figures like a Clockwork-Orangey pimp throwing pink-liquid balloons are colourfully disguised plot necessities, whereas a throwaway scene of the policewoman fulfilling a sudden suicide’s last wish (she asks for her cell phone to be broken, so her husband will never find out she betrayed him) manages to encapsulate Sono’s themes in a short, sharp, shocking burst that feels like an aria of pain and regret. What remains in mind is not the deft accumulation of a welter of incidents and symbols, but the richness of their arrangement, allowing for staggeringly subtle gradations within a flashy framework: a tribute to man’s—no matter how misguided at times—attempts to come to terms with (dark) desires and regrets, and the incommensurability of emotions and thoughts. References towards art and literature seem especially pertinent, not to mention the stunner of an ending: over the credits, the cop suddenly finds herself re-enacting a story—pointedly about an absurd act of realization—told to her earlier, expressing a yearning for freedom by getting rid of (emotional) garbage.

Ironically, Miike’s reverse process of cleaning up evokes an impasse: Hara-Kiri and 13 Assassins demonstrate a classical craftsmanship few contemporary directors could ever hope to match, but at the cost of personal expression. Miike’s single-minded take on a straightforward samurai tragedy follows the original’s outlines, yet replaces its smart, suspenseful time-shifts with big blocks of flashback melodrama. More detrimental is Miike’s essentially sensible approach to stereoscopy: “Nothing changed for me shooting a movie in 3-D.” Not quite Raoul Walsh, whose essentially three-dimensional use of deep-focus space made for an ideal style (cf. 1953’s Gun Fury), Miike’s reticent use allows for theatrical contemplation and sparse, sublime effects—as in the daylight dissolves to filigreed autumnal leaves and branches rising from the shady mise en scène. At least they were visible through the heavy glasses: the marvellous, mostly brownish palette of the interiors tended to sink in the murky fog of light reduction, making Cannes’ first 3-D competition entry a good argument against the process. Unfazed by technical impediments, ever-prolific Miike provided a buoyant market counterpart with the winning, goofy Ninja Kids, an anarchic revue of (mostly charmingly analogue) slapstick pratfalls and surreal digressions. What’s more, its bright and kinetic style seemed rather inviting to an old-school 3-D treatment, quite unlike Hara-Kiri. But undeterred by production circumstances, Miike, like Sono (or Refn), is content showing himself a stylist that has understood what it takes to be a good genre filmmaker today—the same thing needed to persevere in the proudly ridiculous Ninja school: “guts.”

Posted in CS47, Festivals, From The Magazine, Spotlight