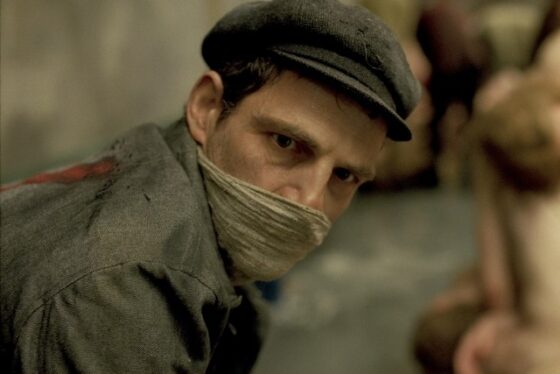 Dennis Lim’s Artforum dispatch from Cannes pauses briefly to ponder the merits of László Nemes’ Son of Saul and concludes that, either despite or because of Nemes’ “showboating” tendencies, it’s a film that will “spawn a thousand think pieces.” If the ruminations that follow will, I’m afraid, constitute one of the first of those think pieces, it’s probably because the prospect of writing a straightforward review of Son of Saul is rather wearying. The tale of a member of a Sonderkommando unit (a corps comprised of Jewish prisoners assigned by the Nazis to dispose of dead bodies at the Auschwitz-Birkenau death camp) named Saul Auslander, Son of Saul successfully pushed the buttons of several distinct constituencies which regularly cover Cannes. A faction that might be termed the “populist humanists” lauded the film for reminding us of the moral ambiguities bound up with foregrounding a protagonist who is, in some respects, both a victim and a victimizer—even though the late Hannah Arendt was, depending on one’s propensities, either famously or infamously unsympathetic to the plight of the Sonderkommandos. While praise for Nemes’ film dominated the trade papers and more mainstream websites, a more cinephilic contingent sniffed at the film’s technical proficiency and dismissed it as something of a stunt. (Manohla Dargis’ excoriation of Son of Saul as “intellectually repellent” in The New York Times was one of the few jaundiced reactions to the Grand Prix winner in the Establishment press; most of the grumbling about Son of Saul during the festival was confined to chitchat between screenings that has, for the most part, yet to find its way into print.) If this critical polarization proved predictably Manichean, Claude Lanzmann muddied the waters by attending the film’s premiere and giving it his wholehearted blessing.

In his introduction to We Wept Without Tears, a collection of heart-wrenching testimonies of Sonderkommando members, Gideon Greif maintains that “[Any] attempt to produce an accurate, cohesive, and realistic portrayal of these prisoners’ lives is doomed to failure because conditions in Auschwitz-Birkenau changed continually.” While this observation focuses on everyday contingencies, Greif’s emphasis on the impossibility of producing an “accurate,” not to mention “realistic,” portrait of one aspect of the Holocaust mirrors debates that have raged for decades concerning the quandaries involved in representing the Holocaust on screen. Certain films of course have become flashpoints in these debates. For the generation inspired by the New Wave, Jacques Rivette and Serge Daney’s contempt for a tracking shot in Gillo Pontecorvo’s Kapo (1960) that “reframes” the dead body of a character named Teresa played by Emmanuelle Riva became part of a Cahiers critical agenda determined to avoid the pitfalls of a vulgar realist aesthetic. (Daney never even saw Pontecorvo’s film—Rivette’s condemnation of the shot was sufficient for him to register ethical and political revulsion towards Pontecorvo’s aesthetic choices.) Since the ’90s, a more broad-based, less specifically cinephilic debate has revolved around the political implications of Schindler’s List (1993). The literary scholar Bryan Cheyette, for example, chided Spielberg’s Holocaust epic for constructing a “seductive and self-confident narrative…at the cost of any real understanding of the difficulties inherent in representing the ineffable.” In a more nuanced assessment of Spielberg’s megahit, the late Miriam Hansen opposed the “high-modernist,” quasi-Adornian argument of many of Schindler’s critics who constructed Lanzmann’s Shoah (1985) as a good object in order to scapegoat Spielberg’s film as unredeemable kitsch.

Curiously enough, Son of Saul—whether one likes it or loathes it—also helps to dismantle the binarism Hansen opposed, since it amalgamates motifs that can be found in both Schindler’s List and Shoah. Some of Shoah’s admirers were no doubt surprised that Lanzmann proclaimed Son of Saul the “anti-Schindler’s List” in an interview he granted to Télérama. After all, doesn’t Son of Saul, with its opening scene set in the gas chambers of Auschwitz and its graphic foregrounding of myriad atrocities, stand in stark contrast to Lanzmann’s determination to avoid graphic re-enactment of genocidal horrors, a “refusal” that Hansen viewed as grounded in a secular version of the Second Commandment? All one can conclude is that Lanzmann’s strictures are somewhat more pliable than Hansen and others have assumed, as long as a filmmaker like Nemes opposes the redemptive pieties of a film like Schindler and attempts to honestly depict the unpalatable dilemmas of Jewish victims like Saul’s Auslander—a figure who, to a certain extent, might be deemed a fictional version of Shoah’s Filip Müller.

Of course, it is slightly odd that Lanzmann manages to overlook Son of Saul’s quite palpable sentimental underpinnings. Despite the austere veneer of a style influenced by Béla Tarr (Nemes spent two years as Tarr’s assistant), there’s an undeniably Hollywood-like impetus to the narrative. The crux of the central “conflict,” in a narrative arc that would easily have pleased Syd Field, involves Auslander’s discovery that the corpse of a young boy is in fact his son. This catalytic event convinces Saul that he must, despite the threat of retribution from his Nazi tormentors, provide his son with a proper Jewish burial. As in the magical tales analyzed by Vladimir Propp, Saul must “liquidate his lack” or, in other words, reach the end of his seemingly futile quest.

Nemes’ visual style melds several approaches. In addition to a fondness for Dardennes-like over-the shoulder shots, much of the film intersperses fairly conventional editing choices with art cinema flourishes, primarily the use of shallow focus and vertiginous camera movements, that succinctly convey the chaos that erupted in Auschwitz as the demands of survival vied with futile attempts at rebellion. A key example is a sequence when Nemes, using somewhat classical setups, depicts Saul’s conversation with a camp doctor, himself a prisoner, who can only promise the desperate father a mere five minutes with his son’s body. Nemes soon cuts to a human maelstrom as Saul continues his quest; all sense of classical continuity is calculatedly suspended. This push-pull strategy seems designed to please both Establishment critics and art-cinema devotees.

It’s this sort of hybrid approach that wowed many critics while fomenting skepticism among a smaller, arguably more discerning, subset of the commentariat. Yet Son of Saul is as difficult to dismiss summarily as it is to embrace uncritically. Is this legitimate ambivalence or mere wishy-washiness? For me, the upshot is that, if I’m honest, I’ll admit that the film works on a purely visceral level. Nemes’ undeniable technical finesse allows the viewer to enter a kind of sensorium that replicates the experience of a representative of a Sonderkommando unit. For the film’s detractors, this stab at extreme verisimilitude resembled the contours of a video game more than the vicissitudes of classical naturalism or realism. (Since I’ve never played a single video game in my life, I find it difficult to grapple with this accusation.) I don’t think the film, whatever its flaws, can be termed “intellectually repellent,” since it scarcely traverses intellectual terrain at all. Unlike Schindler’s List, it doesn’t even bother to put forth an argument—even if Schindler’s argument concluded that you need a Christ-like gentile to save the Jews. Son of Saul’s father-son dynamic is not that much less maudlin than no-holds-barred Holocaust kitsch such as Mark Herman’s The Boy in the Striped Pajamas (2008). Nemes, however, artfully disguises his film’s sentimentality with a plethora of distancing devices. It’s of course up to the viewer to decide whether this mongrel aesthetic yields any new insights or merely recycles old Holocaust tropes in shiny new packaging.

Posted in CS63, Festivals, From The Magazine, Spotlight