By Jason Anderson In CS63, Festivals, From The Magazine, Spotlight 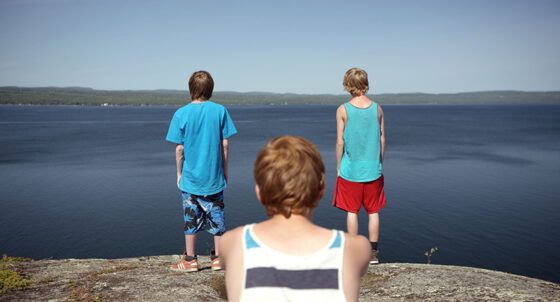 Almost 90 per cent of Canada is uninhabitable. Of those who live in the rest, the overwhelming majority live within 500 miles of the US border. So maybe it’s not so surprising that the nation’s filmmakers—themselves largely clustered in the same few square miles of Toronto, Vancouver and Montreal—regard the hinterlands with so much fear and mistrust. Sure, those placid lakes, verdant forests, and dramatic mountain ranges may look pretty in the commercials made to lure wealthy Asian tourists. But stories about forays into the bush tend to turn out about as well as a camping trip in a Margaret Atwood novel—in other words, with a bedraggled, half-feral traveller trying to fend off a gang of marmosets while armed only with a tree branch.

Such anxieties have inevitably encouraged a tendency for the urban and suburban in Canadian cinema. Small-towners or cottage owners they may sometimes be, but Denys Arcand’s philandering academics, Atom Egoyan’s emotionally calcified neurotics, and David Cronenberg’s death-tripping schizoids are all quintessential city folk who couldn’t possibly know how to start a campfire. It can feel as if nothing was learned from Meatballs (1979).

Nevertheless, Andrew Cividino’s Sleeping Giant—which is the third and most accomplished feature debut by a Canadian to score a Cannes premiere in recent years—points to a renewed eagerness to venture into wilder spaces. One major reason for this shift in orientation is the tax breaks and other incentives that have driven so many productions towards more thinly populated regions. Northern Ontario has been one region to benefit, such that there’s now something even sadder than the sight of Toronto doubling as New York for an American production: it’s Sudbury playing Toronto for an impoverished Canadian one.

Wisely, Cividino opted for a rugged landscape over the pathetic cityscape options when he headed north to film Sleeping Giant. Like the short that won the youth jury prize at Locarno last year, Cividino’s Semaine de la Critique selection takes its name from an enormous rock formation near Thunder Bay. The beauty and grandeur of the region is repeatedly emphasized in shots that circle around it from the vantage of Lake Superior, largely scored to the music of the Toronto-based prog-gospel band with the none-more-Ontario name of Bruce Peninsula. Yet the setting’s perils—especially at the local landmark known as “Todd’s Cliff,” so named after the kid dumb-slash-brave enough to jump off and survive the 100-foot drop—are just as significant in this story of the shifting dynamics and sublimated desires among three teenage boys over the course of a tumultuous summer.

The title of Sleeping Giant is an apt one, being suggestive of something mythical and awe-inducing, yet also a dormant threat that must be regarded with great care if you don’t want to get crushed. The image suits the film’s attitude toward its setting, which elicits an equal measure of wonder, exhilaration, and dread. The last of these builds inexorably as Cividino works hard to exploit the many possibilities of this place, tracking his young characters through a series of vividly rendered exteriors (the forest, the beach, the cliffs, the country highway) and more fraught interiors (a sauna, a video arcade, the cottages of the wealthier summer visitors, and the smaller and often crummier shacks and trailers where the townies live, work, and party).

Just as the meanings of outside and inside (and outsiders and insiders) shift throughout Sleeping Giant, its representations of the natural world become more complex and contradictory. It serves as both a zone for liberation and self-transformation and a place of danger and self-destruction.  In this respect, Cividino’s polished, often affecting feature shares much with Denis Côté’s woodsier films. Ever since the couple began to sense an ominous presence in the trees outside their cabin in Nos vies privées (2007), Côté has repeatedly cast a wary eye into the forest. In Elle veut le chaos (2008), the heroine seems to be in danger of being swallowed up by the thicket that she must repeatedly cross. No better off are the title characters in Vic + Flo ont vu un ours (2013), who get an especially gruesome lesson about the evils that lurk in the woods.

Sleeping Giant’s central figure is an outsider who seems very badly suited to his new environment. Sensitive and watchful, Adam (Jackson Martin) has just returned with his parents for another summer at their lakeside cottage near Thunder Bay. As Cividino demonstrated with his short—which he had intended to be a feature until budget problems necessitated the compression—he’s admirably astute about the differences of class that exist among the people at the edge of Canada’s fleetingly swimmable lakes. There’s no missing the gulf that exists between Adam and his new friends, cousins Nate (Nick Servino) and Riley (Reece Moffett). At times, they barely seem to speak the same language, which may be one reason Adam is so quiet in their company. Still, his eyes betray just how thrilled he is to be included, even if he’s more drawn to Nate than the scrawnier, abrasive Riley. When a spate of wrestling on the beach leaves Adam with a bloodied forehead, Riley is hardly sympathetic: “Stop being a pussy,” is his advice. Though the cousins are continually taunting each other, Riley’s snarky attitude has a harder edge when he targets Adam. “You anger me,” he tells him. “I don’t know what it is but you piss me off.”

With their fondness for shooting off fireworks and careening around in a golf cart, Nate and Riley seem halfway feral already. Unlike Adam, they don’t have any parents around—both boys live with their grandmother, who tolerates the teens’ smoking and drinking beer but chastises them for cussing. The only other adult in their lives is a Kraft Dinner-eating pot dealer who regales them with stories of Todd’s Cliff.

It’s not that Adam’s any better off with his set of grown-ups. Upon discovering that his would-be cool-dad of a father may be having an affair with a local, Adam begins spying on the woman, in effect becoming the ominous presence out in the dark. Unable to concede the true nature of his feelings for Nate, Adam reacts even more harshly—and far more ruthlessly—than Riley does when the trio’s equilibrium is disrupted by the addition of a fourth wheel.

Todd’s Cliff becomes the ultimate test of manhood for the three young characters, all of whom are so deep in the darkest tunnels of adolescence that adulthood seems almost inconceivably far away. That’s largely to the film’s benefit, Cividino having created something unusually raw and painful from otherwise familiar coming-of-age tropes. And whereas he risks being overindulgent or overly demanding of his actors as scenes of the boys’ hijinks-heavy bonding give way to more acrimonious and sometimes more contrived developments, Sleeping Giant comes far closer than most teen-centric dramas to conveying the damage that young people can inflict on each other as they constantly jockey for power (in this respect, Moffett’s snotty bravura may be the film’s greatest asset). Well before anyone in this trio faces a dare to jump off Todd’s Cliff, they’re all egging each other on. As much as all those gorgeous views in Sleeping Giant may encourage a more reverential attitude toward this setting, the film’s most unnerving scene suggests that Cividino has something else to say about how these characters perceive this place. For them, communing with nature may have less to do with loon calls and canoe trips than finding a dead bird on the beach and smashing it to pieces.