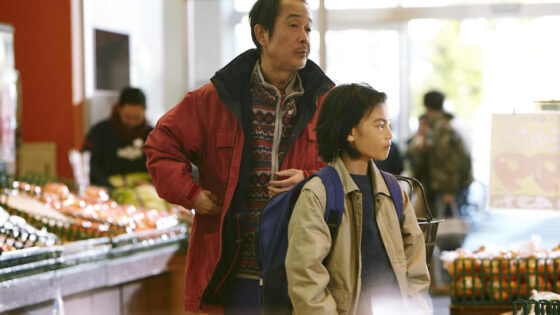 There was a distinct feeling in the air at this year’s Cannes that the Competition jury was under far more scrutiny than usual. The Cate Blanchett-led, female-majority group illustrated a gesture by the festival towards gender equity and a commitment to making structural changes in one of the industry’s most prestigious institutions. In a film culture still steeped in the fallout of #MeToo, the question loomed: how might a jury of mostly women shake up the outcome of the competition? In a program of particularly strong contenders, few predicted Kore-eda Hirokazu would take home the Palme d’Or for Shoplifters, his return to the Japanese family drama after a tepid foray into crime thrillers with last year’s The Third Murder.

Despite Blanchett’s insistence that the multi-racial, -gendered, and -generational jury meant theirs “wasn’t a homogenous perspective,” the selection of Shoplifters feels a bit like a safe consensus. At different times in his career, Kore-eda has been compared (favourably and unfavourably) to both Ozu and Spielberg, combining the thematic concerns and aesthetic trademarks of the former with the more mainstream, crowd-pleasing attributes of the latter. (At one time Spielberg was primed for an English-language remake of Kore-eda’s Like Father, Like Son, which he awarded with the jury prize when he was president in 2013.) On the Cannes snap-judgement smorgasbord that Twitter transforms into every May, one ungenerous observer proclaimed Kore-eda’s work “fine” and the filmmaker as the “Ron Howard of international art house cinema.” (A considerable insult to both Kore-eda and the term “fine,” as Howard—who should be flattered—consistently bats far below the Mendoza Line.) Inherent in these initial impressions is an unfair assumption that crowd-pleasing somehow precludes formal and narrative rigour, and in the latter regard Shoplifters is among Kore-eda’s most accomplished works, a family drama that remains admirably measured even at its most emotionally devastating.

The film’s Japanese title Manbiki Kazoku more directly translates to “Shoplifting Family,” a too-cutesy label that belies the film’s bite. Shoplifters captures roughly a year in the life of middle-aged couple Osamu (Lily Franky, returning as Kore-eda’s go-to “good dad”) and Nobuyo (Ando Sakura) Shibata, who preside over a household of grifters. Broke and only intermittently employed, the pair rely on the shoplifting exploits of Osamu and their adopted son Shota (Jyo Kairi) to feed and clothe their household. One winter evening on the way home from a five-finger-discount spree, Osamu and Shota happen upon an abandoned five-year-old named Yuri (an astounding child performance by Sasaki Miyu). Upon realizing the full extent of the child’s neglect, the Shibatas decide to take the girl and raise her as their own (“It’s not really kidnapping if you don’t ask for a ransom,” Nobuyo unconvincingly reasons). The delicate equilibrium of the Shibatas’ impoverished-yet-loving home is threatened when Yuri is reported missing soon thereafter.

As an observer of the various dimensions and dynamics of families, Kore-eda is a modern master. The true precarity of the Shibata family unit (rounded out by Kiki Kilin as the grandmotherly Hatsue and Matsuoka Mayu as an adult “sister-in-law”) is revealed piecemeal throughout the film, and initial assumptions about their relationships to one another prove false: no one in the household is actually related by blood. Rather, they are a group of castoffs who have come together by choice. Whereas Kore-eda’s previous films have explored the traumas that bubble up from a family’s past (as in Like Father, Like Son, Our Little Sister [2015], and After the Storm [2016]), the familial harmony of Shoplifters is tested by an encroaching fissure, hinging upon Shota and Osamu’s makeshift father-son bond. With this in mind, Shoplifters reflects a refinement of the themes explored in Like Father, Like Son, though occasionally ham-fistedly. The biggest knock on the film is that Kore-eda’s script too often rehashes the central thesis, such as when a character explicitly articulates that the act of “choosing someone” can create a more powerful bond than simply being born into a family.

Kore-eda has shrugged off superficial comparisons to Ozu’s low-angle tatami-mat camera placement in the past, but the implementation of this kind of framing in Shoplifters is surely indebted to Ozu both in its establishment of the house’s interior geography and in its examination of class consciousness through the eyes of the Shibata children. The floor-level frame highlights the piles of boosted goods that line their cozy den of thieves, a detail that points less to stealing as a means of survival and more to a mischievous criminal compulsion on Osamu’s part. Shota’s initial enjoyment of his and Osamu’s shoplifting schemes (filmed with the exuberance of a light-hearted heist film, complete with hand signals à la The Sting [1973]) eventually wanes as Yuri is groomed to become the crew’s third member. Shota’s jealousy of his new sister eventually gives way to a growing awareness of the complicated morality of their existence on the fringe and to the roots of his own loyalty to his adoptive family.

Which brings us back to Blanchett’s jury. Though ultimately an extra-textual discussion, Shoplifters’ Palme win is important to consider in context. The lingering question of whether or not the women “got it right” at a moment when this concept seems to be driving evaluative critical culture may determine if Cannes will continue experimenting with consciously equitable jury selection in the future. To be sure, “rightness” is a pernicious and reductive way to think about subjective jury processes under any circumstances, and it’s an unfair standard with which to burden a majority-female group. It’s far more productive to consider why this particular jury responded to this particular film. At the awards press conference, Blanchett explained that she and other members of the actor-heavy jury “were completely bowled over by how intermeshed the performances were with the directorial vision.” Certainly Shoplifters is populated by Kore-eda’s most fully fleshed-out characters, aided by a cast that ably lend the illusion that their characters exist outside the confines of the film. One can imagine the deal was sealed during a late-film monologue by Ando’s Nobuyo, in which the Ozu-ian frontal camera is recalibrated as a tool of interrogation as well as empathy. If the Meisner philosophy holds true that “acting is reacting,” then Ando’s set piece is a master class. While the teetering piles of stolen junk in the Shibata house reflects the unstable foundation of the family, the camera’s unbroken gaze into Ando’s face shows the fallout of that foundation having crumbled. It’s a raw performance, and it’s easy to imagine a jury of fellow performers connecting with such onscreen vulnerability.

Shoplifters’ win might not be indicative of any sort of institutional shake-up, but that doesn’t discount it from being a Palme-worthy pick. Even though the second act closes with a melodramatic contrivance, Kore-eda undercuts the treacle with a darkly comic turn. It’s in this third act that Shoplifters rises above the quiet domestic dramas of the rest of his oeuvre and becomes something far more bitter. The breezy bubble of contentment Osamu and Nobuyo have created for themselves is suddenly, harshly invaded by the real world and its unsympathetic bureaucracies as their unlawfully adopted children are whisked away for good. The sweetness of the relative familial bliss that characterized the first two-thirds of the film underscores the final shot of Yuri peering out from the balcony of her abusive home as one of the bleakest in this year’s Competition, and a far cry from the peddling of typical feel-good fare by Spielberg—or glossy, Disney-approved franchise filler by Ron Howard, for that matter.

Posted in CS75, Festivals, From The Magazine, Spotlight