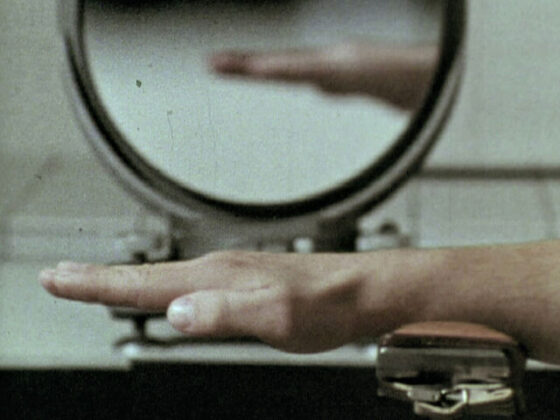 Miguel Gomes is in a tricky position: three features into his filmmaking career, he’s already developed a remarkably consistent and well-rounded personal style, stretched it to the breaking point, and then whittled it back down. Tabu, Gomes’ 2012 breakout, felt like a triumphant fusion of elements from his previous two features, borrowing the bifurcated narrative structure from his debut The Face You Deserve (2004), the warm-blooded midsummer sprawl from Our Beloved Month of August (2008), and from both films a pronounced use of mythic folk narratives and meta-movie devices. While many were doubtless wondering where Gomes could go next, few would have guessed that his next work would be a 26-minute found-footage film about, among other things, the family life of Nicolas Sarkozy.

For all their Rivettian game-playing and winking self-awareness, Gomes’ films are all, at root, portraits of cooped-up, restless people who crave an escape from their present situations, whether through fantasy, music, role-playing, moviegoing or memory. The same goes for Redemption, which consists of four first-person letters written by Gomes and his frequent collaborator Mariana Ricardo, read by voice actors (including filmmaker Maren Ade) over strings of densely packed archival clips, and ascribed at the movie’s end to a quartet of high-profile, right-leaning European politicians (who shall, save the aforementioned président, remain nameless). Where Gomes’ previous films loped along at their own generous pace, each major event lodged between extended stretches of hangout time, Redemption plays like a breathless highlight reel. That said, it’s also marked by many Gomes trademarks: his profound sympathy for people cut off from their own pasts; his conflicted attitude towards how movies function as a kind of memory surrogate; his interest in the grey areas between national and personal remembrance; and his tendency to lace his satire with sympathy.

The first episode takes place in the former Portuguese colony of Angola, immediately after the 1974 Carnation Revolution toppled Portugal’s authoritarian government and liberated its West African holdings. On the soundtrack, a young Portuguese boy watches a sawmill from his school desk and mourns the downfall of the Second Republic, while footage flits by of masked tribal dances, processions of white-robed schoolchildren, and scythe-wielding men dressed head-to-foot in red. Here, as in Tabu, Gomes suggests that for a certain contingent of privileged Portuguese, colonial West Africa is remembered as a kind of lost Eden: a place so exotic and strange it calls to mind a stage of life when the world itself seemed strange, exotic, and new. (Accordingly, one of Redemption’s first images is of a rosy-cheeked toddler frozen in shock at the birth of a calf.) In other words, the childhood paradise Redemption’s subjects long to regain—a time prior to political allegiances, class awareness, and moral compromises—is nothing of the sort; if anything, it’s a direct product of those very same allegiances and compromises.

In the second section, an aging, corrupt Italian politician (and convicted sex offender) pines for a boyhood sweetheart. (“Did you vote for me, Alessandra?” he asks pitifully.) His fantasies tend to revolve around escape and flight: window-jumpers heroically diving through the air to land on safety nets below, or, in a whimsically low-tech scene from Vittorio De Sica’s Miracle in Milan (1951), two kids mounting an enchanted broomstick and soaring high above a massive crowd. Gomes has dealt before with put-upon grownups who retreat into worlds of childlike make-believe (most notably with the misanthropic schoolteacher of The Face You Deserve), but he’s never done so quite this pointedly: our narrator’s innocent daydreams appear between clips of children stitching together stuffed animals en masse in sterile factories, a sardonic reminder of the gap (to say the least) between the world this man has the luxury of imagining for himself and the one he’s helped create.

The third letter, too, concerns the difficulty of cordoning childhood off from the compromises and incriminations of political life, but it also raises a new question: To what extent can the film’s speakers rightly be said to have pasts of their own, now that they’ve chosen to conflate themselves with a government, a party, or a national creed? “I fear you are not to have a real father,” the third speaker tells his infant daughter over home-movie footage of a pair of siblings sledding with their dad. He’s preemptively guilt-wracked at the thought of being absent from his family, but still more so by the trail of negative evidence he’ll leave behind: when you search for photos, he tells her, there won’t be any to find. It’s as if his highly public position as a figurehead of the state has denied him the right to remember—or, for that matter, to be remembered.

Which brings us to the movie’s last and longest segment, compiled from rhapsodic amateur wedding footage. On the day of her marriage, a young, politically ambitious German woman finds herself haunted by a shimmering, thick-stringed passage from the prelude of Wagner’s Parsifal. “If I shut my eyes firmly,” she tells herself, “maybe this music will go away.” Instead, it swells still louder—a painful reminder of “less happy days,” but also a stand-in for a particularly dangerous vision of the German state: one in which the individual is subsumed under an emblem and an ideal. The speaker makes some empty threats (“If this fascist Wagner doesn’t shut up…”), but in effect she’s acting out her own inability to give up that ideal, to dislodge herself from the country that formed her. The suggestion is that statecraft, like Wagner’s thunderous Gesamtkunstwerk, is something total and all-consuming, capable of drowning out any one person’s private commitments and joys. “No fatherland, no country, no God,” she repeats desperately, as if to say: only this moment, my moment. But in governance (as in art), there is no my, only ours.

This might seem like an odd conclusion to take away from a film made up entirely of intimate monologues, especially when the monologues in question are attributed to real-life political leaders. But if the movie’s punch line is that we’ve been listening all along to the private confessions of some of Europe’s most infamous prime movers, the deeper joke is that nothing in the movie—neither text, nor voice, nor image—really belongs to its ostensible subjects. In one sense, Gomes is giving these wistful heads of state a surrogate past, cobbled together from scraps of film(ed) history; in another sense, though, he’s also imposing a past on them, substituting their memories with a kind of public, communal mini-archive. For all their talk of living in an “eternal present” (as the third speaker puts it) and all their movie-drunk dreams of flight, they can’t manage to retreat into a past that’s exclusively their own. Whenever they try to confess or reminisce in the first person, they’re stuck with the plural.

On one level, then, Redemption’s subjects come across as pathetically tragicomic figures, cut off from their own private lives by their Wagnerian dreams of glory. But it’s the fact that this same sense of estrangement comes through in the structure of the movie itself—in the divide between who’s supposed to be speaking and the voices we hear, or between the memories we’re supposed to be watching and those we actually see—that makes Redemption at once so funny and so profoundly sad. In the end, the only eternal present open to these lost souls is the collective memory of the movies—which, Gomes suggests, is both a kind of redemption and a bitter compromise.