A Pigeon Sat on a Branch Reflecting on Existence (Roy Andersson, Sweden) 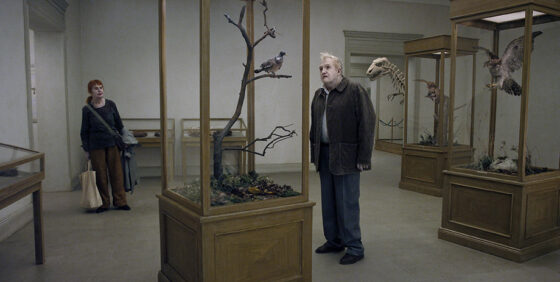 Filmmakers have a variety of reasons for enlisting non-professionals for their casts, but often what they seek is a rude, unvarnished vitality that actors can only simulate. Roy Andersson, however, works hard to dull any such spark from his chosen performers. First among his favoured tactics is the makeup that leaves their faces looking pasty, pallid, and largely free of flesh tones. While slightly more colourful, the typical wardrobe selections are unflattering and ill-fitting: business attire for the men, Mennonite casual for the women. Whatever their gender, their gestures and movements betray little evidence of grace even when the characters perform in a dance studio, like one of the many clusters of unhappy folk in A Pigeon Sat on a Branch Reflecting on Existence.

No matter what the circumstances at hand—which in the new film range from a desultory museum tour to the humiliating retreat of King Charles XII and his forces after their defeat in Russia circa 1709—Andersson’s sleepwalkers struggle to produce any kind of reaction. Typically imprisoned in the middle distance of Andersson’s shots, they are impassive to the point of seeming frozen, their facial features locked in expressions of helpless stupefaction. One can imagine Andersson approaching an actor after a take on a Stockholm soundstage—whose temperature is carefully maintained at four degrees Celsius, as recommended for safe food storage—and quietly imploring, “Can we try that again, except with a little less hope?”

Of all the miserable people in Andersson’s Golden Lion winner, the two novelty-item salesmen who provide the film’s hardiest throughline may be the most forlorn. Jonathan (Holger Andersson) arguably has it the worst of the pair since he’s forever trying on the cheap vampire teeth and hideous “Uncle One-Tooth” mask that the team feebly hawks to a variety of uninterested clients. His shoulders slouching ever lower with each appearance, he eventually gets to assume a more natural position when he spends one of his last scenes head down on a desk in the facility where he and partner Sam (Nils Westblom) are presumably biding their time until death’s release. Not that there’s any dignity in succumbing to the inevitable, judging by the events in an unrelated scene, where a man’s sudden demise on a ship cafeteria floor prompts the staff to implore someone, anyone, to claim his lunch since it’s already been paid for and cannot be returned.

That A Pigeon… still qualifies as one of the year’s most richly amusing and deftly orchestrated films will be no surprise to Andersson’s loyalists. However, the coarsening of the director’s tactics as he hammers away at his favourite notes once again may leave them feeling more of the despondency they see in their on-screen surrogates. The film closes what Andersson has taken to calling his “trilogy about being a human being.” Though the phrase certainly has elements of his mordant humour, it’s also symptomatic of a weakness for over-ambition and overstatement that mars the final entry more than its predecessors. The fact that it’s the least fragmentary and most easily parsed of the three also goes a long way towards explaining why it’s the one that has netted the biggest prize. Compared with the slow disintegration of everything you know and hold dear in 2000’s Songs from the Second Floor (which is grim yet fastidious enough to evoke Time of the Wolf as directed by Jacques Tati) or 2007’s more eagerly phantasmagorical You, the Living (which almost concedes the existence of joy even if it can only live in our dreams), A Pigeon… drives a harder, straighter path to its big ideas, which is both a strength and a liability.

Indeed, however much it shares with the others in the trilogy or the vast array of reference points that Andersson has cited—e.g., Bruegel the Elder, the Neue Sachlichkeit art movement of ’20s Germany, Homer’s Odyssey, Peruvian modernist poet César Vallejo—A Pigeon… may be closest in form and sensibility to his own short film World of Glory (1991). That was the first full demonstration of his mature style and his moment of re-entry into the cinema world after the largely disastrous reception of Giliap (1975) and his far more successful spell directing ads. Several scenes in A Pigeon… seem to bear a direct relationship to World of Glory, most prominently a horrific sequence of African slaves being herded by colonial-era soldiers into a monstrous steampunk musical contraption and then roasted for the entertainment of a wealthy audience.

Nothing in Andersson’s work has been so assaultive as the first scene of the earlier short, in which Holocaust imagery does the work of the latter’s bleakly absurdist refashioning of European colonialism. In the first case, a mass of similarly helpless naked people was shunted and sealed into the back of a truck whose one airhole is then hooked up to a hose leading from the exhaust pipe before being driven away. Played by Klas Gösta Olsson in the already requisite makeup, World of Glory’s unnamed narrator and central figure is among the crowd of gaunt onlookers, though as the truck drives in circles with its suffocating cargo in the back, he looks back toward the camera every so often with a forlorn expression as if to say, “This really is awful, isn’t it? Makes you think.” To be fair, the actual contents of his direct address to viewers in the remainder of World of Glory’s 14 minutes are not as firmly on the nose as some of the lines in A Pigeon…, which can unfortunately shift away from Andersson’s preferred voice for his characters—the flat, featureless vocabulary favoured by emotionally repressed Northern European bureaucrats with shades of Beckett, Monty Python, and one of SCTV’s Ingmar Bergman parodies—and sound rather more like thesis statements about the unmitigated shittiness of things.

“I’m happy to hear you’re doing fine” is the refrain that is most often repeated in A Pigeon… It’s an emblem of the kind of blandly non-committal, vaguely positive talk that Andersson’s characters try their best to employ, mostly since they’re not allowed the release afforded by primal therapy or party drugs. While happiness exists only as a fantasy in You, the Living—most memorably in the young woman’s dream of post-nuptial bliss in an apartment that’s incongruously situated on a moving train—here it can only be part of a romanticized past. More specifically, it’s confined to the ’40s-vintage beer hall known as Limping Lotta’s Bar, where the titular hostess leads a sing-along before gamely dispensing kisses to each and every soldier there.

This brilliant long-take sequence is one of A Pigeon…’s showstoppers. Its impact is matched by the two entrances for King Charles XII in an inexplicably present-day bar that is roughly commandeered by his officers. Like the lovers-on-the-train sequence in You, the Living, these segments elicit a feeling of awe: who else but Andersson could mount scenes that are so logistically daunting and so unabashedly idiosyncratic? Though A Pigeon… is the first Andersson film to be shot digitally, he continues to rely on practical, in-camera effects. To watch all of the king’s soldiers and horses march past the bar’s front windows—and then stumble and hobble back in the other direction after the Russians do their worst—is to witness the crackpot apotheosis of the dearest principles of Hegel, Bazin, and Buster Keaton.

And yet as we continue to track the downward trajectory of the salesmen and other sad sacks, the film falls prey to strategies that seem laborious rather than admirably labour-intensive. Another gruesome sight gag, this time involving the agony of a lab monkey, possesses an anger that feels too brazen for the trilogy’s fussy, fusty universe. Other lamentations sound like just that, and are cried out in voices that belong in our world rather than the more ascetic and aesthetically purified one that Andersson has so carefully devised. Such lapses convey a degree of restlessness, as if he were chafing at the limitations of the deadpan brand he worked so hard to establish. But there’s a hectoring quality to them, too, as if he regarded his viewers to be as dense and unfeeling as the people who fill his frames. Finally we are left to conclude that our reward for meeting the challenges of being human are so pathetically meagre, we’re wise to snatch a dead man’s lunch whenever given the opportunity. Since it apparently comes with a full pint of beer, it could be a worse deal.