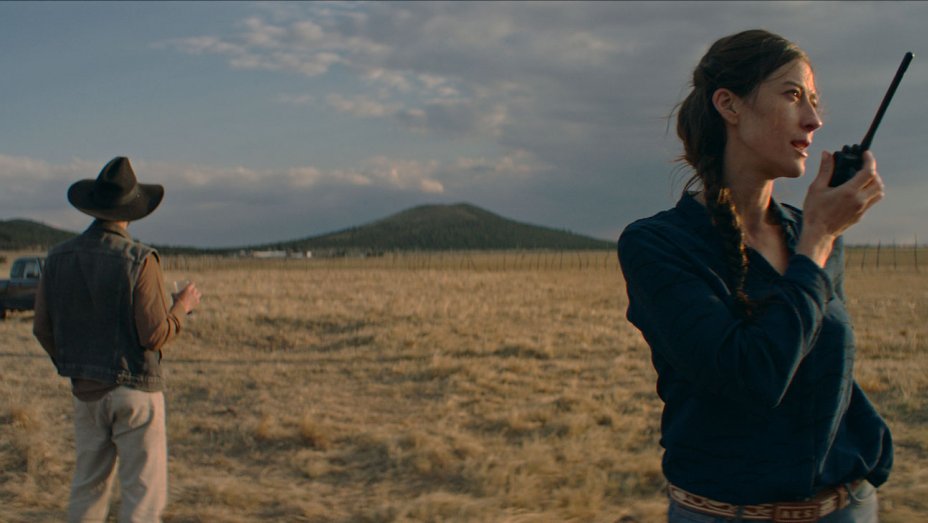 For whatever thematic heavy-handedness or structural deficiencies Carlos Reygadas’ films may consistently and inevitably fall victim to, the man sure knows how to open a movie. Information, images, forms arrive from somewhere as something undefined—stars shining from who knows how far away; a small child lost in a field as day loses light—and we enter into them consumed by unawareness. In the beginning, there’s only vision and the senses: perception itself. Reygadas respects realism in his representations, but he also understands that our relationship to the world is always more unstable than we can ever realize. And so he elongates his preludes, edging us in a layer at time, protecting us from the onrush of imagination-annihilating impulses to identify, shape, and “read” images as information for as long as he can. He inevitably abandons abstraction in favour of a structured narrative—how could he not? These films don’t fund themselves. But he does so as part of a design that ensures we’ll miss the purity of those initial mysterious moments, which operate blind to the strictures of so-called moral behaviour.

For the first 40 minutes of Our Time, we’re offered a variation on the now-anticipated narrative lead-ins to Reygadas’ movies. Instead of emerging from darkness, there is instant visual clarity. The sun is out, children are laughing, and the tone is welcoming rather than foreboding. What’s exhilarating, though—especially for viewers who enter the film tabula rasa—is that the narrative mystery is not only still present but also relatively elongated. For the first quarter of this 173-minute movie, we have little idea where or with whom our sympathies will ultimately lie, nor if the picture will even settle on a specific set of individuals from among the (what must be at least two dozen) characters on screen.

This curled, meandering opening act is headlined by an extended sequence in a muddy dam that’s easily one of the film’s highlights. Unlike the beginning of Post Tenebras Lux (2012), which likewise courts us with a child in a swampy, ostensibly barren landscape, we are encouraged to attend to character rather than mood. Dialogue and faces are scattered and arise mostly non-hierarchically. Young children dart and stomp enthusiastically through the mud, sling sludge into each other’s faces, and carp about how snotty some of the older girls are. Meanwhile, members of a nearby clique of teenagers curse the “damn mud,” discuss whether they ought to get drunk or high, and awkwardly shift around a tangible air of sexual tension; Juan and Lorena run off from the group flirtatiously, singling themselves out until their tryst is stunted and they reintegrate, and Lorena promptly partners up with a different boy, Santi. After they escape to make out and perhaps have sex, they are completely dropped from the narrative and never shown again.

Subsequent scenes introduce a ranching community of middle-aged adults, showing their off-work leisure time as well as a gruesome incident in which a bull maims a mule—so matter-of-fact and horrific that you wonder if the event occurred casually during the shoot and they just decided to work the footage into the movie. Whether or not that’s actually the case, such an instance exemplifies Reygadas’ realist tenor and methodology. These inclusions make his films feel more true and genuine—legitimately of the real world—and have the effect of lofting their more sensuous, physical, and abstract moments to almost spiritual heights. Having never been coy about his indebtedness to Tarkovsky, whose work strives for similar modes of transcendence, Reygadas’ ability to manifest the sacred from authentic, documentary (as opposed to constructed, “arthouse”) presentations of vulgarity is precisely what makes his voice so vital and singular. He isn’t just another resident time-sculptor.

The concern I had after watching Our Time, though, wasn’t whether or not there were any such moments of metaphysical bliss; there are, and they are among the most glorious in Reygadas’ filmography to date. Rather, there’s an uneasiness in the film, and it stems from the follow-through—that return to innocence and purity that reinstates the divine. And this may be a matter of length. Despite some modest elliptical leaps, this is arguably Reygadas’ most conventional and chronological storytelling to date, especially once the relationship between two characters—Juan (played by Reygadas himself) and his wife Esther (Reygadas’ wife Natalia Lópes)—becomes the film’s clear locus point. The child’s-eye view of the world, experienced in the film’s introduction via Reygadas’ notoriously physical camerawork, gives way to perspective, order, and law.

For more than two-thirds of Our Time’s running time, Juan and Esther (whose names intentionally evoke the lead couple—Johan and Esther—of Reygadas’ cuckquean melodrama, Silent Light [2007]) quarrel through an open marriage that’s falling ever further from grace. Because of effortless intimacy gained from Reygadas and Lópes’ many years together, the interactions between them always extend beyond the frame, outwards from the film. This is especially apparent when they verbally spar, which they do frequently when Juan becomes agitated by the dispassionate turn he believes Esther takes after she begins to grow close to a gringo named Phil (Phil Burgers). Naturally, tension escalates as her attention and affections become increasingly divided between the two men, prompting the couple’s arguments to become more tedious, Juan’s masculinity more toxic, and their trajectory as a couple more visibly determined. Their world sinks into a template, acting out a readymade free fall that is no doubt as tedious to live through as it is to watch. To incriminate Time itself would be perhaps too tidy and simplistic a charge to make in this context. So instead Reygadas does what any self-respecting aesthete would: he interrogates language.

Somewhere just past Our Time’s mid-point, a conference moderator introduces Juan, who will be giving a lecture on his award-winning poetry. To set the stage, the speaker offers the room a short treatise on literary art. “Poetry—using words to see—becomes a tool of knowledge,” she says, “because language takes on a different form, as a beacon of words.” She concludes her remarks by evoking the end of Mark Strand’s “Seven Poems,” in which a subject walks ever deeper into a darkening corridor. Unlike his cattle ranching, Juan’s poetry practice is mostly negligible to the film’s narrative: we never hear or read any of his poems or see him writing them, and the few diegetic mentions of his work are brief and exclusively laudatory. What matters is simply that we understand that Juan grasps the nature and power of words at an expressive and aesthetic level. And while this is not the first time that a Reygadas picture has centred upon a pensive male artist (see the unnamed lead of Japón [2002], a painter so overcome with anguish that he intends to take his own life), it is the first time he has taken the aesthetic and philosophical merits of “the word” to task.

Indeed, this is a film about failures of communication, and it’s by far the most verbose production that Reygadas has ever made. Featuring no less than four extended monologues (and occasional omniscient voiceover narration provided by one of the movie’s child actors), Our Time forwards the technological means of Juan, Esther, and Phil’s correspondences, drawing our attention to instances in which the characters are seen or heard reading, writing, and mentally processing the emails, texts, and letters they’ve exchanged. In the most amusing and sublime depiction, Esther sits in the grand auditorium of Mexico City’s Palacio de Bellas Artes, where she will hear a live performance of a Gabriela Ortiz timpani concerto, only to lose herself in an SMS exchange (“Yes, Phil. I’m still floating”), her face glowing in the screen’s light, the camera soaring across the palace’s architecture as though it were an intergalactic nebula. Later, in the film’s most (literally) transporting scene, with the camera attached to the underside of an airplane, Esther’s voice recites the entirety of a swirling, seven-minute confessional she’s written to Juan, expressing, among other musings, her need to escape the computer, to regain some clarity, to step back from the time she’s spent with her husband so that she can perhaps finally see her marriage for what it is. Eventually, without a single visible cut, she signs her name, and the plane wheels hit the runway. That Esther’s words are always visualized by splendorous ventures through images of nature and high art while Juan and Phil’s dispatches are adorned solely by mundanity probably has something to say about where Reygadas intends to direct our sympathies. But it doesn’t change the fact that, in a realm where actions and senses have way more stock than anything that anyone could say, their words have no agency at all to redirect where their time together ultimately leads them.

Posted in CS77, Fall Festival Spotlight, From The Magazine, Spotlight