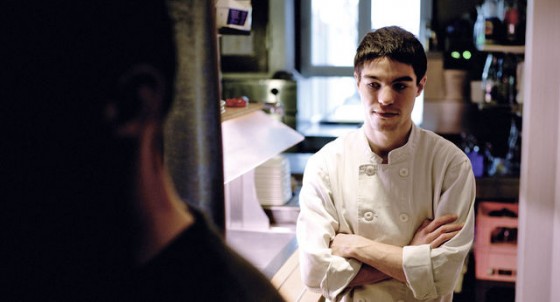 Some mysteries aren’t meant to be solved, and Mouton (no, this isn’t another film about sheep) from first-time directors Gilles Deroo and Marianne Pistone, is the latest in a budding field of beautifully irreducible tales—blessed with the imprimatur of Locarno’s Opera Prima award—that refracts its subject through a prismatic approach to narrative. This shape-shifting is derived from a reflexive consideration of any given scene’s formal capacity to cast an expansive repertoire of unforced meanings. Mouton may be, pace its characters, about the “same old, same old,” but the familiar isn’t necessarily excluded from infinite re-imagining. At the very least, the moving image can’t resist being eventful, no matter how pragmatic or mundane, and certain filmmakers are constitutively invested in this dimension of film that Bazin deemed the “factual hallucination” of the image.

The eponymously named “Sheep” (a nickname presumably owing to his easily swayed nature) is first glimpsed nervously pacing a courtyard beyond a carefully framed window pane, his destiny debated in a foregrounded bit of exposition that sees his alcoholically unfit mother losing legal custody of the boy, in spite of her professed love. Cut to a shot of Mouton, naked, lean, dressing in a bathroom with the radio on, donning a chef’s apron and rubber boots, tucking a package of cigarettes into his chest pocket. The parsing of narrative information is held in an uncommonly equilibrial embrace with the material effects of the scene. What we know of Mouton does not supercede what we know, for example, of his rubber boots: together their registration speaks to the gradually unfolding fact of his work as a stagiaire, or chef’s apprentice, in a seaside restaurant that we first see through the back door, in the blue light of dawn, as the daily delivery of fish is unpacked from a truck. As an establishing sequence, the containing shots are attuned to the ambience of the occasion as inseparable from what’s going on: the cry of seagulls alerts us that we are at the coast; the grain of pebbles crushed underfoot confers a sense of being in the moment; the collective “Bonjour, Madame,” to a passer-by implies quotidian routine; Mouton’s toothy grin suggests an irrepressible shyness, perhaps owing to his being a non-professional actor.

Mouton proceeds by similarly subtle intrigues, as each scene is invested with an interrogatory naturalism that seems to be imploring just what, exactly, one should be looking for, only to dissolve and leave in its absence the sense that in searching one may be missing the plenitude of the moment. Call it narrative fleecing. The conspicuous fades serve as an aperture that invokes and then recedes from points in Mouton’s story, with scenes playing out like diaphragmatic disclosures of a reverie, or myth, albeit uncharacteristically shot like a documentary. This fable-like aspect is already evident in the film’s detached synopsis, in which, “It was said that Mouton worked a simple life as a worker at the seafood restaurant for three years.” Such intimations of predestination, in which drama is foretold, of course recall Bresson, as does the materialist composition in which character identification is “an impertinence—an affront to the mystery that is human action and the human heart.” (Sontag). But Mouton is no Diary of a Country Chef. Nor is it a secular story of Jesus set in a woefully insular French township, though a case could be made for certain stirrings of a spiritual sort evident in the embodied figure of Mouton, spit upon, his flesh taut and blemished, exposed to a painterly light which the directors have carefully harnessed.

Deroo and Pistone have spoken of a kind of “transubstantiation” in relation to realizing certain aspects of an unconventionally poetic script through sheer conveyance, eschewing dialogue in favour of gesture, sentiment, and subtle observations of the everyday. Thus Mouton is devoid of arc, but rich with incident of an inscrutable nature: the filleting of fish (“It can’t feel anything now”); cooks gathering in their off-hours, eating and smoking; a lone meal carefully prepared for a late-arriving guest; a stray dog scrounging for food behind the restaurant; sand washed from the feet after a day on the beach; an awkward first kiss shared by Mouton and the new waitress, to the sound of a pummelling rock song; two elderly women descending a staircase, lamenting the absence of a lift, while a hurrying Mouton politely yields. The cumulative effect is one of more benign rather than portentous associations, in spite of an act of violence that arrives to snatch Mouton from habitual comforts—and from the very process of being revealed through narrative at all.

Perhaps more shocking than the cruelly random incident that maims an innocent Mouton is the Brechtian means by which the directors suture the event dramaturgically: an off-screen narrator remembers, from an unspecified historical perspective, the events of a fateful night on the pier, after the revelry of the St. Anne’s Ball. “It seems as if it were at random. It is said that dogs came out from nowhere, howling,” a spectral voice intones, anticipating the incident’s vulgarly non-dramatic realization on-screen. The event bifurcates the narrative with unexpected velocity to reveal an inchoate fable that is taking shape inside the film’s properly recognizable dimensions. The viewer is potentially peeled away from any faithful adherence to the disclosures of narrative. The film’s subsequent second chapter is titled like some approximation of a prosaic synopsis: “They Live the Rest of Their Lives.”

There’s something appropriately memorial about the film’s handling of a disappearance, of the immeasurable weight of absence. Mouton isn’t gone—he’s moved to Picardy and living with an uncle—but he could, despite intentions to the contrary, be forgotten. The film weighs most heavily when it imagines, quite unsentimentally and rather objectively, what forgetfulness entails, such as a bowl of steak tartare from the butcher’s shop that Mouton’s friends, Louise and Mimi, share while waiting for a bus. There is a scene of a dog being deliberately abandoned by Mimi (who works in a kennel much the same way Mouton worked in a restaurant), and the camera traces its movement to the threshold of desertion, leaving ambiguous the distinction between being stranded and being liberated. The notion of straying informs the mise en scène’s animalistic feints, just as the selective and non-salacious attention to the carnal reminds us that we are of flesh and bone. The film is primally predicated on feeding, of humans and animals, and of humans as animals. “That’s the way it is,” says an inured butcher, “one needs to eat”; a sentiment practically parodied in Mouton’s suckling of his date’s breast. Throughout Mouton, various cats get lost, dogs are forsaken, and fish are ceremoniously blessed, but the lone sheep vanishes without revelation or consolation, reduced to a faded photograph, much like the seaside town of Courseulles-sur-Mer is relegated to a tourist postcard in the film’s coda.

“Life goes on, right?” implores Louise, now with child and no time to write to Mouton. It’s a familiarly wistful sentiment, particularly well suited to cinema’s temporal qualities, but rarely explored with such structural audacity and unsensational curiosity as in Mouton. A vague sense of indifference is immanent in our daily lives, however vigilantly we attempt to observe our departed. Mouton, for all its brute realism, is rather forgiving in this regard, locating pockets of grace in the seemingly forgettable gestures that constitute the hours of a day, and the texture of a life. It may be conventional to say, but it’s a film that’s not easily forgotten.