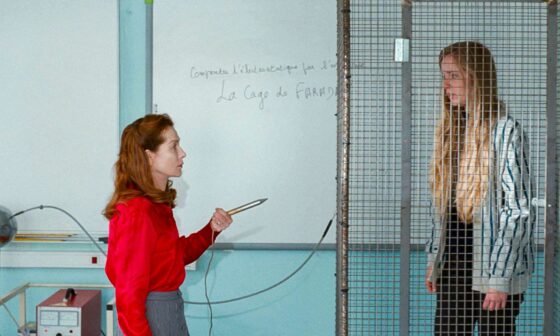 “It’s a cry echoed by a thousand sentinels

An order relayed by a thousand heralds

A beacon flaring up a thousand citadels

A call to hunters lost in the great woods…”

“A woman of fire makes no sense.”

In addition to often being quite funny, Serge Bozon’s fifth feature and second consecutive Isabelle Huppert vehicle is an exemplary film about pedagogy, perhaps one of the great ones about intuition, and also one of the strangest screen interpretations of Robert Louis Stevenson’s seminal 1886 science-fiction/horror tale The Strange Case of Dr. Jekyll and Mr. Hyde. The last is no small feat: at more than a hundred adaptations of the story made for film and television since the silent era, Jekyll/Hyde is the most-filmed Gothic creation apart from Dracula (whom Bozon, probably not coincidentally, paid homage to in his last film Tip Top [2013]). And while a number of treatments of Stevenson’s story have productively subverted, among other things, its gender designations and core conceit—a wish-fulfillment fantasy in Jerry Lewis’ The Nutty Professor (1963), an anarchic explosion of blood and orgies in Walerian Borowczyk’s Docteur Jekyll et les femmes (1981), to name only a couple—Bozon and screenwriter Axelle Ropert’s treatment is less subversive than it is Cubist and glancing, resulting in a movie that crosshatches its various planes of ideas, templates, and discourses in order to simultaneously pay tribute to and move beyond certain systems of logic.

Divided into three chapters, Madame Hyde initially appears to be a relatively familiar take on the urban classroom drama. Huppert’s Madame Géquil teaches science at the Arthur Rimbaud Technical School in the Parisian suburb Garges-lès-Gonesse, where her emphasis on theoretical descriptions of elemental topics like heat and electricity inevitably and consistently alienate her students (all of whom are portrayed by actual students who were then currently attending the Rimbaud school). Due for inspection and always visibly on the verge of losing her composure, Géquil becomes drawn to the prospect of mentoring her physically disabled student Malik (Adda Senani), a companionship that is prompted by their mutual status as outsiders. The nature of their alliance is anything but stable, though, and once Géquil is pierced by a freak lightning bolt in her lab on the night of a harvest moon, initiating the transformation promised by the movie’s affiliation with Stevenson’s story, psychology is removed from the movie’s equation.

Unlike virtually every other rendition of Jekyll and Hyde’s central “divided self” metaphor—which almost invariably investigates morality within the terms of right and wrong, good and evil—Bozon’s take is predicated on (at times literal) enlightenment. When knowledge is understood to be the currency that negotiates every relation, Madame Hyde becomes a sphere where theory and practice are at war (“No more proofs, long live machines”)—hence why Madame Géquil/Hyde and Malik’s initial laboratory interaction, wherein she walks him (and us) through solving a rudimentary Euclidean geometry problem in real time, proves to be the movie’s most invigorating set piece. Encouraging Malik to “Think!” each time he gets stuck, Géquil/Hyde demonstrates her faith in the axiomatic arrangement of the world, and the primacy of intuition for understanding the most elemental of environmental properties. This, for her, is the basis of human progress: “Euclid, Archimedes, Descartes, Galileo, Euler, Leibnitz, Gauss, Frege…without them, no computers.” As Malik points out, though, there is nothing essential about computers: we could do without them, as we always did before we had them. What’s essential to being alive on earth, he suggests, is elemental; it’s anything beyond that which requires theory or proofs, and needs be rooted in experience—and experience takes time, a duration that must be lived in order for it to be fully ingested. What’s essential is “knowing how to be happy.”

Bozon and Ropert clearly derive a considerable amount of pleasure from invoking early modernity’s old masters. Why else would they briefly pause the proceedings to have Huppert recite the penultimate stanza of Baudelaire’s “Les Phares,” in which the Decadent summons eight painters (Leonardo, Rembrandt, Goya, et al.) who have inspired his creativity and links them to the divine and eternal? These makers, “the most sublime, proof of our worth and value,” are represented not only as flares for the world to see more clearly—symbolically incendiary, no doubt, in the same manner that Madame Géquil becomes radioactive in the form of Hyde—but as a legion of scavengers who leap into the primal abyss of their own subconscious in order to exhume inspiration. Genius and beauty are always already present; they just need to be accessed.

In order for the film to manifest these qualities, to elevate it to something that manifests beauty through experience as opposed to only being about it, Bozon—working with his cinematographer (and sister) Céline Bozon and editor François Quiqueré—amplifies the tactility of the images and the impact of the montage. The grainy, primary-coloured pastels of the film’s colour palette, combined with the angularity of the mise en scène (rulers, chalkboard lines, triangles galore), bring a Hans Hofmann-esque flatness to the screen—a plane that has a skin, a skin that is entirely haptic. The frame, already felt, is then pushed to the sculptural via the staccato rhythms of the cutting. Sharp, precise, and seemingly always ending a scene at the moment when further action begins to become palpable, Bozon and Quiqueré create a narrative chronology that twists, crunches into itself, cranes its neck to see around its own corners; it’s a procession of events that can transition from solemn and static to vibrant and musical without a moment’s notice. Factor in the sustained emphasis on all the senses—bodies radiating, skin burning, hands wafting, noses sniffing—and you have an impression of a world that is real and embodied. The movie becomes a living object that breathes, and it excites its moments of beauty into something close to both lunacy and the ecstatic.

What’s ultimately so odd and affecting about Madame Hyde is that it embodies Malik’s position about “the essential” to an absolute degree—extolling the primacy of nature and our primal, intuitive relations to the world, above whatever comforts we derive from “history and progress”—all while the narrative revels in lucid explications of science and encourages the viewer to interpret that science allegorically, meaning that we must register its information in two ways at once. Stranger still is that the film’s methodology devours whatever metaphorical moral statement it ever comes close to making, whether that be about the evolution of domestic roles, the dynamism of the self, one’s capacity for murder, or class disparity and systemic racism. It’s certainly not happenstance, for instance, that every student in Géquil’s science class (save for a pair of uptight twin white girls) is either Arab or black; nor that one of the film’s climactic exchanges involves Malik’s father (Jamel Barbouche) speaking plaintively about how he warned his son of the dangers of aiming too high in life, and how he repeatedly attempted to dissuade him from believing that studies would ensure him a good wage; nor that Géquil’s final lecture is an attempt to explain how an organism’s size is negotiated by both its genes and its environment. The film preaches oneness but continually shows twoness, and thus offers a fundamentally ambivalent image of unity in a broken and perpetually bisecting world. Whether or not it ever settles on a reasoned expression of any truth at all is beside the point. What Madame Hyde is after—to echo Bozon and Ropert’s appropriation of Tolstoy’s words for the film’s conclusion—is the joy of discovering a new world, unknown and beautiful.