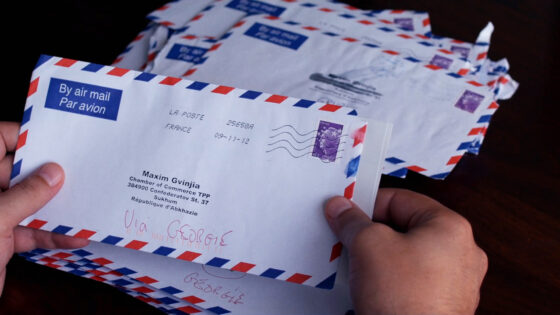 “I am writing you this letter from a distant land,” begins Chris Marker’s epistolary essay film-cum-travelogue Letter from Siberia (1957), establishing—from this neo-genre’s very first moments—those elements of distance and dialogue that will come to define the “letter film”: a direct address from an almost alien world, bridging gaps and perspectives through a process of writing and reading, sending and receiving. For Hamid Naficy, the cinematic letter serves to model a split subjectivity, constantly demanding that the reader/spectator revise their ideas and points of view, and as such is an ideal means of expressing “the bifurcated consciousness of exile and diaspora…driven by distance, separation, absence, and loss, and by the desire to bridge multiple gaps.” In Marker’s Letter, however, it is not exile but another kind of bifurcated consciousness being explored via the epistolary form: the distance between the ideals of nationhood and progress and those historical remnants still present in the materiality of everyday life.

Like Marker’s film, Eric Baudelaire’s Letters to Max also enacts a correspondence with a distant land: Abkhazia, a small nation in the Caucasus that, like Marker’s Siberia—which was located “somewhere between the Middle Ages and the 21st century, between the earth and the moon, between humiliation and happiness”—has a kind of mythical status. But unlike the icebound hinterland on the other side of the continent, Abkhazia is mythical in a more literal sense. Though the country declared itself independent after it violently separated from Georgia in the early ’90s, it is recognized as such by only a handful of nations—an ambiguous autonomy that lasts to this day.

As well, Baudelaire’s correspondence is more literal than Marker’s poetic missives. Over a period of several years, the filmmaker airmailed a series of letters to his friend Maxim Gvinjia, Abkhazia’s erstwhile Minister of Foreign Affairs, which—by dint of the intended recipient’s semi-fictional country of residence—took a most wayward path before reaching “Max’s” hands (when they arrived at all). The epistolary exchange that the film records—the text of Baudelaire’s letters is shown onscreen, while Max’s replies are read in voiceover—is partly devoted to pondering the very journey that these epistles take: the routes they travel, the hands they pass through, the puzzlement of post offices over the location (and even the existence) of this quasi-mythical land. Just as Baudelaire’s previous film The Ugly One (2013) opened with shots of wires tendrilling through the alleys of Beirut, making visible the communications infrastructure that connect the city’s inhabitants to each other, so his letter film is not just about bridging distances, connecting a here and an elsewhere, but about materializing the lines of communication that make such a connection possible—the physical act of delivery that reveals a complex network of the political and the personal, and of national boundaries and intimate interactions.

Baudelaire has explored this trope of interaction and collaboration across borders in many of his previous films. In The Makes (2009), Baudelaire and film critic Philippe Azoury use old stills and headshots from Toho Studios to manufacture a fictional Japanese period in Michelangelo Antonioni’s oeuvre, based on the Italian director’s unfilmed scenarios from his book That Bowling Alley on the Tiber. In The Anabasis of May and Fusako Shigenobu, Masao Adachi and 27 Years without Images (2011), Baudelaire constructs a fractured group biography of filmmaker and former Red Army militant Adachi, ex-RAF leader Fusako Shigenobu and her daughter May, partly from images Baudelaire shoots in Beirut following Adachi’s written instructions; the collaboration continued with The Ugly One, which was based on a treatment Adachi wrote for a story set in Beirut.

Baudelaire’s films thus do not simply record a correspondence; they create the means for it. Like the letter, cinema here becomes a connective agent, bridging distances physical, temporal, and, perhaps, political. Where The Ugly One connected Adachi to a city he can no longer visit following his ejection from Lebanon, Letters to Max seeks to locate its subject within the paradoxical (no-)place he calls home. Baudelaire’s letters usually ask simple, single-line questions that oscillate between the chatty and the serious, the gossipy, the probing, and the philosophical—“Are you there?” “Are you done with politics?” and (in another nod to Marker) “Are you happy?”—while Max’s replies playfully evade or shift the emphasis of Baudelaire’s questions. Max’s public and private personae tend to blur in his answers: he talks of his son and the end of his marriage, then about his day-to-day duties as a state official; he ponders the importance of Abkhazia’s political statehood, then worries about sounding too much like a diplomat. The internal and the external blur as well: to Baudelaire’s initial, seemingly straightforward question “Are you there?” Max replies, “I’m always somewhere—I’m not concrete. I don’t live in a space where I’m actually physically living. I’m always somewhere in my thoughts…My mind is always somewhere far away.”

Letters to Max is, then, a curious kind of landscape documentary: one that maps both inner and outer spaces, each of which is a mix of the concrete and the imaginary. Such, of course, is the very formula of nationhood—but the vision of a self-sustaining national identity embodied in the second term continually runs up against the relational necessities of the first. The nation, no less than the self, is created out of correspondences between parties, whether willed or not: just as the individual consciousness embodied in the letter is revealed as such precisely in its conveyance to another, so political autonomy is definable only in relation to other autonomies, both far distant and uncomfortably close. As Baudelaire implies in his correspondence, any future sovereignty for Abkhazia may have to be based on forgetting as much as remembering, on the country extricating itself from its history of conflict. “Is this a story of the impossibility to live with Georgians after war, because of war?” Baudelaire asks. “Is statehood about inclusion, or exclusion?” The question remains unanswered.

As Baudelaire and Max collude to create this hybrid portrait of Abkhazia—its fragmented history, uncertain present, and possible futures—another, parallel correspondence develops: that between image and sound. For much of the film, Baudelaire’s removed, observational images seem little more than conventional visual accompaniment, a bit of local Abkhazian colour: rain-spattered dirt roads and farms with abandoned Russian tanks; forgotten Soviet sculpture parks; playgrounds and seaside hangouts, kids marching in unison and a military band practicing a national anthem. As these images accumulate, however, a subtle tension begins to emerge between them and Baudelaire and Max’s increasingly probing correspondence. “What should I film?” Baudelaire asks repeatedly, and he even confesses dissatisfaction with what he has already filmed. On a previous trip he had filmed ruins, “monuments to another logic of time, another logic of space, another logic of politics”; now, he searches for “a different way of making a record of what I was seeing.” At one point, Baudelaire films a strange puppet performance in which a small figure scales the side of a tower by rope and is threatened by a large, three-eyed monster armed with a knife and fork; can Abkhazia’s story be told through allegory, and if so, who is the three-eyed monster? In another sequence, a friend of Baudelaire’s tells a story (possibly fictional) about a Russian director who came to Abkhazia to shoot a film, until he and his Abkhazian cameraman had a falling out and the film was shot elsewhere. As described, the film sounds remarkably like Tarkovsky’s Stalker (1979)—which conjures up an evocative image of Abkhazia as the Zone, pitched somewhere between the earthbound and the ethereal.

The failure of a certain kind of documentation, a certain kind of narrative, reaffirms the need for the letter as a dialogic form, one that collectively imagines and constructs a narrative through collaboration. But it also suggests the letter’s other function: that of the time capsule, or even the time machine. “Are we making a film that goes backward in time?” Baudelaire asks. “Are we making a film about the future?” In Letters to Max, the cinema itself serves as a time machine: a vehicle for nostalgia, for reconstructing the past(s) and places lost, but also for accessing a time and place that have not yet arrived—an uncertainty that finds expression in the film’s final image of a lone cable car, suspended and immobile above the horizon.