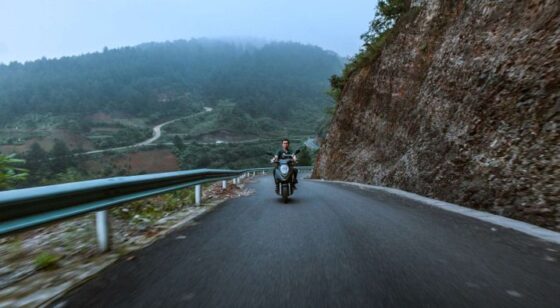 The protagonist of Kaili Blues, Chen Sheng, is a small-town medical practitioner and ex-con. He bought his practice in Kaili, in southwestern China’s Guizhou province, with a small inheritance after his mother died while he was in jail. He’s not exactly a doctor; he’s more of a dreamer, a poet, and a traveller. In Bi Gan’s remarkable debut, winner of Best New Director prizes at Locarno and the Golden Horse Awards, it seems that only dreamers like Chen can see what’s real. He often falls asleep, when we hear examples of his surrealist poetry read in his flatly expressive voice—which, like his face, seems stiff but barely conceals emotional tensions roiling under the surface. The poems are in fact Bi Gan’s, from a collection titled Roadside Picnic (Lubian yecan), which is the Chinese title of Kaili Blues, after Bi’s original title (Huang ran lu, the Chinese name of Pessoa’s The Book of Disquiet) was rejected by censors as too downbeat. These poems lead him, and us, into cinematic dream spaces where Bi’s camera animates a free, curious, and observant subjectivity—maybe a person’s, maybe a poem’s. Even if viewers don’t know exactly what’s going on, we can intuit the emotions, connections, routes, and channels of feelings that course through the film. This isn’t standard art-cinema-approved social realism: it’s a realer sort of realism, bringing us through sounds and images into direct contact with a vividly imagined dream world, but one that’s quite specifically grounded in details of place, biography, and community.

Rather than setting out plot in a somewhat artificially schematic manner, the film builds intricate skeins of narrative that connect all the main characters in complicated ways, with loops and paths that seem spontaneously but organically generated. Still, some clarity can be provided to aid the viewer. Nine years before the story proper begins, a rival gangster buries alive the son of Chen Sheng’s gang boss Monk, and also cuts off the son’s hand. The latter act being intolerable, Chen attacks and perhaps kills the rival, and then goes to jail. When he’s released, he finds that he has lost his wife Zhang Xi to illness. He also assumes responsibility for ensuring the safety of his half-brother Crazy Face’s son Weiwei. Crazy Face is a piece of work, and sells Weiwei (who is fascinated with timepieces) to a watchmaker, who takes him away to Zhenyuan. Chen’s senior medical colleague Guanglin had a lover or close friend named Airen from that town. When she learns that Chen is heading there to find Weiwei, she entrusts him with a mission: to find Airen and give him a cassette tape and a long-ago-purchased shirt.

Chen’s departure splits the film in two. From Kaili we head to Dangmai, a riverside town on the way to Zhenyuan, where Chen is also searching for a group of Miao minority traditional lusheng pipe players, who could lead him to Airen. Bi Gan himself is from the Miao minority. In the film, we see and hear traces of Miao culture: the architecture of old houses in Dangmai; a Miao woman listening to the roadside pop concert; the lusheng pipe music occasionally audible, and the instruments themselves depicted on Miao batik fabric, which itself plays a role in yet another subplot connecting Chen, Guanglin, her dead son, and a fabled “wildman” haunting the film’s margins. In Dangmai, Chen encounters characters from his past and his future. Chen hitches a ride with a band whose teacher studied under Airen, a fact he only finds out later. He encounters a young man, also called Weiwei, with a bucket on his head, having been bullied by rival motorcycle drivers. Weiwei, who is about ten years older than Chen’s nephew, then takes Chen on a long motorcycle ride to meet a young woman, Yangyang, who is planning to be a tour guide back in Kaili. Yangyang mends Chen’s shirt, and leads him to a hairdresser, Zhang Xi, who looks exactly like Chen’s long-dead wife. All four—Yangyang, Weiwei, Zhang Xi, and Chen—find themselves at the band’s streetside concert where Chen, overcome with sadness for the people he has lost and perhaps found, sings, badly, a children’s song. Later, he heads to Zhenyuan where further plot nodes solidify, the watchmaker reappears, and time starts rolling backwards.

Untangling the narrative endoskeleton isn’t easy, but it is also far from what Bi Gan’s film is “about.” What is it about, then? Such a densely worked and intensively designed film has many entry points, throughlines, and endpoints. Bi offers one right at the top: he quotes a Buddhist text from the Diamond Sutra, whose lovely apposite parallelism in Chinese is not reflected in the English subtitles, but it is important:

which translates roughly as:

the past mind cannot be attained

the present mind cannot be attained

the future mind cannot be attained

The dilemma is existential and moral. A complete understanding of our minds, feelings, and our world is unavailable. This dilemma has a specifically temporal dimension. That we experience mind, feeling, and the world through time—exactly as cinema can only record and present these through time—is what perhaps makes it unattainable. That narrative cinema is forced to present reality through time is also what limits it.

Bi Gan proposes a kind of way around this problem (I’m not sure we can call it a solution). And it happens during an astonishing tour de force of mise en scène in Dangmai: a 41-minute-long handheld take that starts with Weiwei waiting with his motorcycle for Yangyang and Chen, progresses through rides on bike, pickup truck, and boat, and strolls up, down, and across stairways and into and out of at least two buildings, a river crossing by ferry and return by bridge, walks up and down stairs, through a wine shop, tailor’s, and hairdresser’s (where Zhang Xi washes Chen’s hair), encompassing Chen meeting the older Weiwei, Weiwei courting Yangyang, and Chen encountering his dead wife Zhang Xi, the four of them listening to the concert. This is a long take that feels long, in a viscerally exciting way. Its pressure grows and intensifies, as we realize that Bi Gan is not going to cut, and that he has the technical skill and audacity to take us through a novel’s worth of interlocking incidents and characters without stopping his camera (well, there is one slight bit of post-production legerdemain, but I’m not going to ruin it for you). It’s exhilarating, it’s tension-filled, and it feels impossible.

In narrative terms, of course that’s precisely the point. How can Chen, who has come to Zhenyuan to look for an eight-year-old nephew, find an 18-year-old future version instead? How can his wife return from the dead? We see it happen; Chen feels it happen. In the mind, the past is attained, the present is attained, and the future is attained. In Bi’s poetic vision, the real—symbol-suffused and visible—is something interior, much more “real” than something “out there” in physical reality. Throughout the film, his camera registers this surreality so much more vividly than merely recording the existing light-reflecting world. The intense blues and greens, the saturated, tangibly thick light and shade of the settings, the impossible visions of twirling, ever-present disco mirror balls, of trains and waterfalls that seem to rush through Chen’s home, defying space, are conjured into light and sound, and, via poetry, into cinema.

Recent Chinese independent fiction cinema has often borne the traces of a social burden, one that is processed via its commitment to a kind of “social realism.” Chinese artists for millennia have assumed the role of socially engaged actors, moral commentators, or guardians of certain autonomous systems of values, and find themselves set against the various oppressive ruling ideologies that have burdened Chinese society. But there are an unlimited number of modes of engagement. Too many direct, cookie-cutter resistance narratives pop out like readymade art-politics products and, sometimes, all too easily find resonance in non-Chinese markets and societies. Bi Gan’s art is something completely different. While it is clearly deeply embedded in contemporary culture, its poetry—not its politics—makes meaning. There is something uncanny, something quietly, modestly rapturous about Bi’s world: it’s seemingly grounded in a specific location, circumstance, and personality, while at the same time freely roaming, and not delimited by space, time, and character. We’re in one place—an obscure little corner of small-town China today—and we’re everywhere, unbounded, set free to wander in a single shot, in a dream without limits.

Posted in CS65, Fall Festival Spotlight, From The Magazine, Spotlight