By Jordan Cronk In Columns, CS71, Festivals, From The Magazine, Spotlight 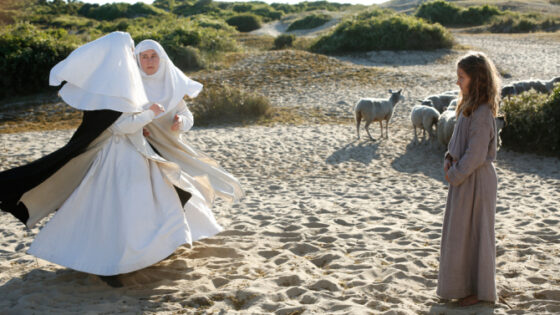 Pitched somewhere between Straub-Huillet and Headbangers Ball, Monty Python and Messiaen, Bruno Dumont’s new feature Jeannette, l’enfance de Jeanne d’Arc marks an unexpected and near-perfect synthesis of the French iconoclast’s many disparate interests and obsessions. Although by now it’s convenient to read Dumont’s robust corpus through the categorical extremes of his early, severe allegorical dramas and the punch-drunk absurdity of his recent comedies, with each new venture it becomes increasingly clear that there’s often been as much humour lurking in his unholy evocations of l’humanité as there is depravity in his forays into more popular genre entertainment—as if with a slight shift in register, the bovine perversions of P’tit Quinquin (2014) or the slapstick cannibalism of Ma Loute (2016) could somehow approach such depths of existential and spiritual fury as a Twentynine Palms (2003) or Hors Satan (2011). What’s made this transition so fascinating is not simply the conviction with which Dumont has taken up each new challenge, but how his thematic sensibility has remained intact even as he’s willfully submitted his established cinematic grammar to all manner of revision.

Jeannette, the highlight of a strong Quinzaine and arguably the only film to come out of Cannes that could reasonably be considered radical, speaks most fully to both Dumont’s aleatoric process and his ideological constitution, traits which here find thrilling release in the form of a musical comedy inspired by the early life of France’s most famous martyr. Joining a long tradition of Joan of Arc films, Jeannette is unique amongst its forebears by the mere fact of its circumscribed vantage. While films by Bresson, Dreyer, Rivette, and Preminger have focused on Joan’s battlefield perils, her trial on charges of witchcraft and heresy, and eventual death at the stake at the age of 19, Dumont’s story centres on an adolescent Jeanne, from the throes of her spiritual awakening to her decision to leave home and take up arms. By reimagining the perspective of the prescribed Joan of Arc narrative, Dumont has in the process performed a keen bit of art-historical reconciliation, reframing the image of a woman whose life and legacy have been defined most often by her fate, rather than the complexities of her character. (This blatant disruption of received wisdom further aligns the film with Dumont’s twin landmarks Hors Satan and La vie de Jésus [1997], the most bracing of his forays into spiritual and metaphysical allegory.)

Taking as his source the writings of French poet Charles Péguy, Dumont establishes a formidable literary infrastructure through which to envision Jeannette’s enlightenment. A totem of socialist and nationalist ideology, Péguy experienced a spiritual renaissance of his own late in life, investing in Roman Catholic theology after years of professed agnosticism. Two of Péguy’s plays, Jeanne d’Arc (1897) and Le mystère de la charité de Jeanne d’Arc (1910), form the backbone of Dumont’s narrative, and account in turn for the entirety of the film’s sung dialogue. Péguy’s prose, intensely lucid and boldly circuitous (“Péguy is actually a rapper if you listen closely,” Dumont told Variety), springs forth in streams of vivid imagery, to which Dumont and cinematographer Guillaume Deffontaines respond with visuals of organic splendour and imaginative wonder. Dumont’s cast, made up of an impressive array of nonprofessionals whose latent talents are superseded only by their infectious energy, meets Péguy’s words with a naïveté borne of a quaint and distinctly untarnished worldview. Considering the regional minutiae of his recent takes on both the rural policier and silent-era slapstick, it’s little surprise to see Dumont’s musical sensibility translate here as a new and fluid form of provincial portraiture; shooting in a 1.55:1 aspect ratio, Dumont fixates on the nuances of his actors’ faces and the expressivity of their movements as much as the landscapes through which they frolic with unpolished delight, his spatially compressed compositions (which appear to nod to the imposing figural motifs of Medieval Catholic sculpture) frequently bringing the distant horizon into direct harmony with the theatrical joie de vivre transpiring in the foreground.

The story of Jeannette is split into two parts: the first follows an eight-year-old Jeannette (played with beguiling charisma by Lise Leplat Prudhomme) as she’s initially called upon by the heavens, her inner fire stoked by the devastation of the ongoing Hundred Years’ War and the anguish inflicted upon her fellow countrymen at the hands of the English occupancy; the second, set “a few years later,” finds the teenage shepherdess (now played by Jeanne Voisin, poised, commanding, and of disarming grace) preparing to embark for war and fulfill her destiny. What’s remarkable about Jeannette is not simply its daring conflation of tones and traditions, but the reverence with which Dumont employs Péguy’s text while so drastically reshaping our collective image of Joan of Arc as both a living, breathing person and an avatar of national honour. By maintaining the integrity of Péguy’s words, Dumont is set free to explore the musical genre as both a dramatic device and a formal apparatus. Utilizing sync sound recorded live on location (according to Dumont, the first time this has been attempted in a musical since Straub-Huillet’s 1973 film Moses and Aaron, an avowed influence on Jeannette), the film captures with striking immediacy the interplay and physicality of the performers, the passion of their largely untrained voices, and the natural ambience of the surrounding environment (with a sandy, oasis-like pocket of coastal Calais standing in for Joan’s birthplace). Assisted by choreographer Philippe Decouflé, Dumont has built the characters around each performer’s God-given skills: there’s Jeannette’s uncle, played by an aspiring local rapper whose charmingly awkward whirl-and-dab dance style steals much of the film’s second half; her best friend Hauviette, who in her older incarnation spider-walks through scenes for no apparent reason; and Madame Gervaise, a nun who here is played by a pair of vaudevillian twins with skin as translucent as their veils. The result in each case is a rare conjuring of unfettered communion between the actor, the environment, and the moving image—inspiration incarnate.

The film opens as it closes, with a breathtaking view of cascading hills and a glistening stream opening forth at the bottom of the frame. At the outset the young Jeannette can be glimpsed in the distance, lying in the grass; summoned as if by divine order, she arises and walks across the water directly toward the camera, singing fervently of God’s calling and the dire state of humanity (“And there is nothing/There is never anything/But perdition!” she repeats righteously). Accompanying her one-woman oratorio is a kaleidoscopic mix of musical arrangements by French electro-acoustic composer Igorrr that moves with prog-like efficiency from caustic synthetic pop to orchestral bombast to death-metal thunder in the span of a few couplets. The vocal melodies, written primarily by the performers themselves, sit tenuously within Igorrr’s dynamic symphonic framework; the push and pull between amateurism and professionalism is constantly being negotiated in Jeanette, and one of the chief pleasures of the film is watching the actors embrace their nascent talents and confront the limits of their abilities with unfettered zeal. If there’s humour in the many juxtapositions and incongruities, there’s nothing insincere about the performances, nor in Dumont’s self-evident devotion to his subject and the material at hand; this is a film devoid of irony. When, at film’s end, Jeannette announces to her family her imminent departure, her mother, father, and uncle mourn in a dance of spirited synchronicity, the melody matched to the rhythm of a chicken being plucked. Emerging from the house, Jeanette proceeds to run in circles, twirl in place, and headbang until her braid comes loose, finally falling to one knee as she looks directly into the camera, the beat of her heart audible on the soundtrack. For all the criticism Dumont has endured for abandoning realism and forsaking characters for caricature, he’s responsible for some of the most exhilaratingly alive cinema in the world right now.

CS71 Editors Note At the Frontier: Valeska Grisebach on Western