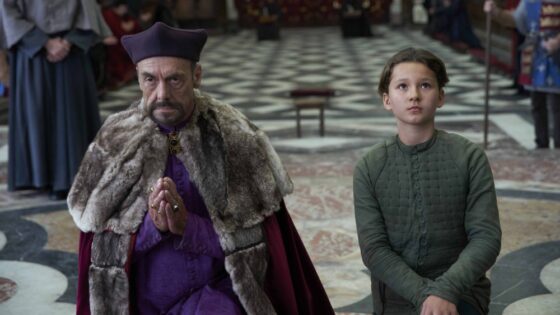 “I understand that, at the time, [Dreyer’s La Passion de Jeanne d’Arc] was a small revolution, but now I only see all the actors’ horrible buffooneries, terror-stricken grimaces that make me want to flee.”—Robert Bresson, Cahiers du Cinéma 13 (1957)

I’ve exited the last several Bruno Dumont films wondering—only somewhat in jest—whether or not their maker had gone completely insane. Until 2014, Dumont was notorious for his straight-faced, neo-Bressonian, severely severe dramas that interrogated the intersection of spiritualism and material form. It’s been said that it was this moment, inaugurated by the four-part TV miniseries P’tit Quinquin, that he “lightened up,” but it’s become clear that this step into ostensible comedy was a lateral move rather than a stark about-face. Indeed, in the funniest of these recent projects—Quinquin, its sequel Coincoin et les z’inhumains (2018), and Ma Loute (2015)—his vision has merely racked focus, accentuating certain components of his direction and thematic interests that have always been present: the naive purity of amateur actors; the cretinism of powerful members of society; and the aesthetic dissonance that results from representing spiritual transcendence as experienced by impoverished, uneducated, queer, and adolescent characters. That Dumont adapted the first part (“Domrémy”) of Charles Péguy’s 1897 play to produce Jeannette, l’enfance de Jeanne d’Arc (2017)—a baroque, death-metal musical that headbanged its way through the pre- and early-teenage years of France’s most passionate heroine—in the midst of this current period of cracked social parodies was already par for the course (however refreshing, invigorating, and totally original the movie may have been). In following up Jeannette with last year’s cockeyed, carnivalesque Coincoin, the question was where in the world he could possibly go from there.

Naturally, the suddenly prolific Dumont needed only a year to answer, which arrived in the form of his second consecutive “sequel,” Jeanne. A longer, quieter, wider-matted take on Péguy’s play (this time its two latter parts, “Les batailles” and “Rouen”), Dumont’s latest is most readily characterized by the ways in which it is different than its spunkier predecessor. Out with Igorrr, in with Christophe, Jeanne is the wiser, raspier relative to the spry and turbulent Jeannette, exchanging the first film’s more radical and irreverent notes—noggin-thrashing nuns! Jeanne’s dabbing uncle! Hauviette’s spider-walk, straight out of The Exorcist!—with moments of contemplative grace, none more rapturous and moving than an early, extended horseback Honour Guard ceremony. Emblematic of the 137-minute Jeanne’s comparatively sensual and unhurried tone, we witness Jeanne on the cusp of battle, saddled up in a large field surrounded by the 50-odd members of her cavalry, basking in the glory of her calling fulfilled. With drummers drumming, her army swirls around and envelopes her in an ornate ceremony (choreographed with help from the French Republican Guard) that lasts upward of seven minutes. In this equine reverie, which plays out immediately after the narrative had already been paused for a similar duration so that Jeanne’s internal anguish could be sung into the clouds (courtesy of Christophe’s timid septuagenarian pipes), Dumont teaches us how to experience this quite verbose film: attendant to song, glances, visual patterns, and the animated body above all else.

For long passages, I caught myself simply watching this movie, every so often checking back in to listen to it. This isn’t to say that language doesn’t matter in Jeanne—on the contrary, it’s absolutely necessary for the film’s full force to be felt—but its dance with historical iconography and myth harks back to early, inarticulate modes of image construction, when framing and cutting were undeveloped and curious, and narrative templates nonexistent. Film theorist Noël Burch has noted how early 20th-century cinema only finally reached durations of half an hour when filmmakers made Passion Plays based on familiar Christian stories, their succession of tableaux vivant linked together in well-known sequences, rendering storytelling syntax all but unnecessary. As though relying on this principle, Dumont’s storytelling in Jeanne is at times crude. For one, his efforts to maintain a sense of linear chronology—opening each scene with a title card stating the date, place, and passage of time—is as quaint as it is expendable. But also, the camera is just more attuned to the performances themselves than the script performed. Dumont understands the timelessness of Jeanne’s plight, that the truth of her passion is as eternal as it is addressed to The Eternal, and so places his faith in cinema’s capacities for transfiguring the world, for elevating the material (the text, the bodies) into the sacred.

Thus, historical accuracy is far from his ambitions, a hypothesis well-supported in his casting choices. Whereas the first film used two actors to play Jeanne at ages 8 and 14, Dumont re-employed only the younger of the pair (ten-year-old Lise Leplat Prudhomme) to return to act out Jeanne aged 17-19. (Falconetti was 35 in Dreyer’s adaptation, so why not?) Youth, obviously an important theme of Jeannette, is even more crucial and complicated here. We sense Jeanne’s (the character’s) actual age in the text, expressed as history and mythology, a deeply internalized symbol of faith, martyrdom, and France’s national identity; but we respond in a skewed way, with Prudhomme’s age heightening the drama effortlessly, phenomenologically. In the charged space between the non-fictitious ten-year-old girl leading battles and standing trial on screen, and the non-fictitious 19-year-old woman who actually led and stood these battles and trials, Jeanne’s juvenescence (and consequently the narrative’s essential tragedy) becomes perhaps as palpable as it ever has in a filmed adaptation of this story.

Dumont’s use of non-actors is, as it was for Bresson and Pasolini, his default procedure. Pasolini spoke of how he chose his actors “for what they are,” never to serve as interpreters, while Bresson referred to them as “involuntarily expressive models,” chosen for their pure, interior essence. This essence, always at the heart of Dumont’s direction, became magnified in his comedies, which challenged the assumed nobility of the screen actor by foregrounding the casts’ failure to achieve some semblance of professionalism. The Jeanne d’Arc musicals work similarly, with the difference being in the abstractions involved. In Jeanne’s first scene, Prudhomme kneels to pray, her eyes piercing the sky as she sways and jerks, the young actor’s body struggling to maintain balance—the sort of awkward, unstable character introductions that run through not only this film, but all of Dumont’s comedic period. This image of Jeanne is less about prayer per se than it is about a young girl in pose, unconsciously negotiating between a persona that isn’t hers and a body that is, intent on resembling a devout woman invoking Divinity. And where Pasolini admitted to struggling to “mystify” the essence of The Gospel According to St. Matthew (1964) while he was making it, Dumont’s venture is more preoccupied with processes of de-mystification: grounding spirituality so we see that the sacred exists not in institutions (the Church, the Law, the Nation), but rather, as he describes it, “in common things.”

That is what all of Dumont is fundamentally about, which is why there may be a no more encapsulating and rigorous sequence in his cinema than the prolonged trial that makes up the bulk of this film. Filmed before the gloriously gaudy High Altar of the Basilique Cathédrale Notre-Dame d’Amiens, the trial here contains many of the same beats, condemnations, gestures, and poses that any other adaptation would include. (Prudhomme’s Jeanne, in the tradition of Falconetti, does gaze up to the heavens quite liberally, something Bresson fervently eschewed in his rendition, lest Florence Delay be bracketed amongst Dreyer’s “buffooneries.”) Yet the architecture of her hearings—the clerical scaffolding built around Jeanne, the cathedral’s magisterial stone nave—has hardly ever possessed such a zealous and powerful presence as in this scene’s mise en scène. Dwarfing the very men who created it, the Notre-Dame d’Amiens here becomes the synecdochal Church, Law, and Nation—a veritable operating system that gives form to nature’s abstractions and the state’s rule, governing and facilitating the actions not only of Jeanne’s trial, but also the universe containing it. It is this institutional form of the sacred that defeats the “common things” via sheer spectacle, with Jeanne’s conviction (in every sense) following suit—de-mystified, ridiculous, yet still impossibly grandiose.

Posted in CS79, Festivals, From The Magazine, Spotlight