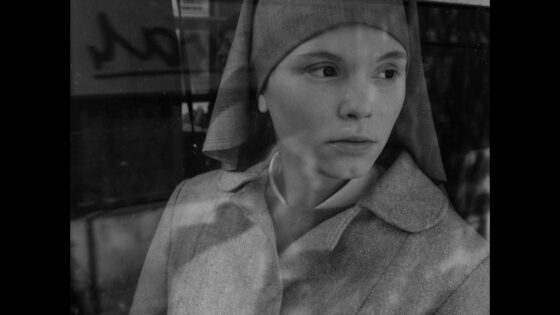 Ida marks Polish filmmaker Pawel Pawlikowski’s first feature film in Polish—the director immigrated to the UK with his parents in the ’70s, and subsequently built his career there—but just what kind of Polish film it is proves a rather tricky question. There are, to be sure, several national-cinema standbys on order: it’s gorgeously photographed in black and white, has a plot that centres on the vexed relationship between Poland’s Jewish and Catholic populations, and moreover has a distinctively Polish je ne sais quoi, that combination of intense brooding and faintly absurd black humour that seems somehow connected to large political and moral questions. Kieślowski couldn’t have done it better, one might say, and yet the filmmaker I couldn’t get out of my mind as I watched Ida was Krzysztof Zanussi, who became the standard bearer for Poland’s “Cinema of Moral Anxiety” in the ’70s and consequently earned the predictable kind of attention from the state overseers. Where Zanussi differentiated himself from his fellow dissident filmmakers, however, was in his devout and open Catholicism, which doubly stigmatized him in the eyes of a Polish state that viewed the Catholic Church as a retrograde obstacle. That was just fine with Zanussi, who saw dissent and religious commitment as going hand in hand: his critique of empty materialism was one and the same as his critique of Soviet-style authoritarianism. (For me, Zanussi’s best film is Contract [1980], whose story of a wedding party without a wedding seriocomically depicts not only the moral but the spiritual emptiness of that first generation of Poles to grow up knowing only communism; the following year, he made a biopic about Pope John Paul II.)

There is in Ida something of that sense one finds in Zanussi of the complex way that politics, religion, and dissidence play out in communist Eastern Europe, but ultimately it feels rather hidden, if not buried, and one has to wonder why. Set in the ’60s, the film focuses on a semi-cloistered young nun named Anna (Agata Trzebuchowska), who, on the verge of taking her vows, is informed by her sexy, secular, and super-socialist aunt Wanda (Agata Kulesza)—a chain-smoking jazz fan and a formerly much-admired (and thus, it is taken as read, much-feared) state prosecutor, now banished to professional purgatory as a rural magistrate—that her family is actually Jewish, and that she was born with the name Ida. To briefly summarize (with spoilers): Anna/Ida and Wanda travel the countryside in an effort to unearth the family’s grim recent history, but the revelations prove too much for both of them; towards the end, Wanda kills herself (in a chillingly well-executed shot where she throws herself from a window), and Anna/Ida seems to takes on her persona. In the film’s key sequence, Pawlikowski cuts from Wanda’s tatty state funeral, where the assembled mucky-mucks begin to play a tape of “The Internationale,” to a jazz club, where Coltrane’s “Equinox” is being tooted out by a sax player with a thing for Anna/Ida, who is sitting at a nearby table wearing Wanda’s period-precise cocktail dress.

Pawlikowski, who has spoken about how Wanda is based on a certain kind of Polish idealist that he remembered from his youth—often Jewish, quite cosmopolitan and sophisticated, and seriously committed to socialism in its more internationalist iteration—seems to pose this “Internationale”/“Equinox” combo as the central mystery of Auntie Wanda, the fundamental contradiction that she can no longer endure. The final image of the young, liberated former nun seems to suggest a dialectically ordained synthesis of the two women: Anna/Ida has, in essence, cast off the chains of both Church and State, no longer constrained by either the ascetic demands of Catholicism or the cold autocracy of Iron Curtain Poland. The problem, however, is that this closing invocation of modernity and liberation—and specifically Western kinds of modernity and liberation—does not seem particularly consistent with the film’s clear intention to present Poland as a nation unable to deal with its painful past. The freedom that Anna/Ida finds and Wanda could never reconcile herself to is grounded in a Western conception of individualism that, given both Pawlikowski’s chosen symbolic vehicle and the film’s sociopolitical context, strikes me as utterly wrong. In the first case, jazz was never just about the virtuosity of a single player: Coltrane’s greatest, most spiritually searching improvisations were unthinkable without the backing of McCoy Tyner and Jimmy Garrison. The film’s grasp of Polish Catholicism’s relationship to Judaism is similarly misguided: coming to grips with your nation’s relationship to its Jewish community basically by becoming more “true to yourself” is to substitute personal becoming for collective being. The same extends to Pawlikowski’s depiction of Anna/Ida’s life in the convent as intensely solitary: while this clearly serves the film’s ultimate thematic ends, it not only evinces a rather blind investment in the notion of the individual self as the alpha and the omega, so to speak, but it propagates a rather radical misunderstanding of what cloistered religious communities are all about (compare, say, Cristian Mungiu’s Beyond the Hills [2012]).

What’s most frustrating about the shallowness of Ida’s Westernized ideology is the luminous and genuinely mysterious visuals with which Pawlikowski invests it: the restricted space of the convent courtyard is as still and cold and deep as the rolling countryside, while the spare interiors conjure lost worlds whose lost-ness seems preordained, inevitable. Visually speaking, the closest analogy for Pawlikowski’s work in Ida is Nuri Bilge Ceylan, with the difference being that Ceylan has a much sadder and, ultimately, a more fully thought-through sense of the relationship between modernity and individualism—an understanding that brings the Turkish filmmaker far closer to Zanussi than is Pawlikowski.

And so we come back to Kieślowski after all. The Kieślowski of the ’70s and ’80s was a dissident filmmaker in a distinctively Polish way, not only critiquing the rigid state under which he lived, but also calling for a more serious, and ultimately more moral, way of seeing the world; The Decalogue (1990), the obvious touchstone in terms of that tendency, is another work that shares a great deal, visually speaking, with Ida. But Kieślowski’s move to France was a nearly unmitigated disaster in terms of serious filmmaking, leading to a series of absurdly pompous and pseudo-metaphysical blobs of Euro-pudding, with the possible exception of the (considerably more Polonized) Trois couleurs: Blanc (1994). What we have in Ida, essentially, is a kind of amalgamation of the Kieślowski of The Decalogue with the Kieślowski of Trois couleurs and La double vie de Véronique (1991). While Ida’s visual style is part of a recognizably Polish variant of a contemplative filmmaking tradition that has yielded some very fine contemporary manifestations in Turkey, Portugal, and elsewhere, its ideology feels pan-European in the most pejorative sense—one that is unable to fully evoke how, in the Poland of the ’60s, Catholic asceticism was as countercultural as jazz. That sense is there in the film, but in the end Pawlikowski takes the easy way out, and lets us forget that the guy who wrote that groovy jazz that welcomes our ex-nun into the brave new world of the Age of Affluence has, as his undisputed masterpiece, a small symphony called A Love Supreme.