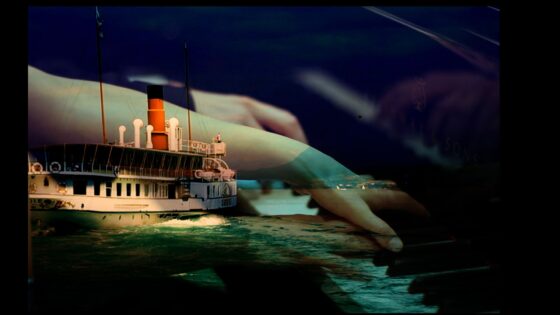 First, bless Charles Tesson for having the balls to acknowledge that experimental cinema exists, no matter that its manifestations at Cannes are still ghettoized to a damp auditorium in the gaudy Miramar hotel, located somewhere around the halfway point to Antibes. The fact that Tesson has spent his two years as artistic director of Cannes’ Critics Week closing out the section with short films that can categorically be labelled as avant-garde—including works by major fest-circuit auteurs such as Tsai Ming-liang and João Pedro Rodrigues (last year) and Peter Greenaway and Jean-Luc Godard (this year)—suggests that he believes in challenging the notion that narrative and non-narrative cinema should be segregated. Screening only once as the section’s ceremonial film de cloture, these brief showcases offer critics a moment of respite, and some welcome perspective, within a festival that has proven discomfortingly complacent in regards to the oppression of the marketplace.

Not that this year’s shorts, shackled together as part of a 70-minute omnibus project titled 3x3D, are at all ignorant of the market. The project is founded on two organizing principles: one geographic, the other formal, but both essentially promotional. Regarding the former, 3x3D was, like the 2012 Centro Histórico—a collection of shorts by Pedro Costa, Manoel de Oliveira, Victor Erice, and Aki Kaurismäki—co-produced by Fundação Cidade de Guimarães and organized to celebrate the selection of the Portuguese city as the 2012 European Capital of Culture. But while the Centro quartet adhered to so-last-century two-dimensional planes, the three films in the self-evidently titled 3x3D—courtesy Greenaway, Godard, and token Portuguese contributor Edgar Pêra—call on the powers of stereoscopic 3D technology.

Of 3D’s many stigmas, the one most frequently cited is economic: notoriously expensive to produce (and purchase tickets to), the format has become the token of shameless studio profiteering so far in the 21st century. The chief curiosity when approaching 3x3D is how Greenaway and Godard would incorporate the technology into their respective aesthetics; and, conversely, what that technology would look like when employed by filmmakers who have always sought to place art ahead of capital. (Concerning Pêra, whose Cinesapiens concludes the triptych and runs as long as the other two shorts combined, those who don’t walk out before his film’s end will leave with a definite understanding of why they’d never heard of him before.) The simple answer is that Greenaway and Godard have made Greenaway and Godard films with a z-axis dropped in, which makes their contributions feel simultaneously familiar and revitalizing.

As an ode to Guimarães, 3x3D is an utter failure, but Greenaway earns points for at least following the assignment: his opening gambit Just in Time spends its 18 minutes circling the Paço dos Duques de Bragança, located in the city’s centre. Once again rocking his trademark picture-in-picture aesthetic, Greenaway drafts a mise en scène that lies somewhere between a CD-ROM and an Adobe software user manual. Fetishizing the idea of history-as-database, he lines the palace halls with three-dimensional didactic texts that hover amidst the architecture and flamboyantly superimposes the ghosts of artists past into their medieval stomping grounds; names and biographies of Portuguese poets (Francisco Martins Sarmento), playwrights (Gil Vincente), economists (Alberto Sampaio), and saints (São Gualter, São Nicolau) serve as beaded curtains of sentences that scatter into particles of letters as the camera pulls past them. Little of the information registers, but it isn’t meant to; as always with Greenaway, it’s the sheer surplus and aesthetic assault that count.

Despite any aversions one may have toward Greenaway’s well-worn aesthetic, there is a genuine grace and beauty in the meticulous organization of the graphics, the vibrantly colourful animations, and the camera’s flowing choreography around the space. Perhaps it’s only the novelty of the 3D, even though the stereoscopic effects aren’t apparently integral to the film—except in one instance where Greenaway quite spectacularly updates his old tricks. Outside in the courtyard, the camera tracks through a Saint Nicholas Day celebration, at which point the screen splits off into multiple panels, showing the plaza at different times of day simultaneously. The dimensions of bodies, limbs, and exteriors interrupt one another to create a radical and disorienting spatial fragmentation that is, frankly, dizzying. The temporal simultaneity of the Futurists here becomes wedded to an uncanny, Magritte-like layering of perspectival illusions; there’s something thrilling about experiencing such an extreme compression of time via an as-yet-unseen compression of space.

From a postmodernist approach to a modernist, Godard’s Les trois désastres is 3x3D’s literal and figurative centrepiece, and proves that the man certainly hasn’t lost his penchant for literalizing his wit. The first image to fill the screen is a noisy and two-dimensional video of three black dice (dés), the lo-fi quality of the footage an immediate rejection of the polished standards of studio stereoscopic form, while the dice serve as an initial dissection of the portmanteau in the film’s title. Removed of chance (not to mention choice), we’re left with the stars (astres) in the night sky—an ostensibly flat plane of points above our heads which mathematics (cued by Godard’s mention of N) tells us is, in fact, a space of infinite depth.

Depth, though (and this is the magic word for Godard here), is precisely what’s been lost: the rise of the technological and the digital is a trajectory inverse to that of our historical consciousness. Working in the signature essayistic style he implemented in Histoire(s) du cinema (1988-98) and the third part of Film socialisme (2010), Godard explores a triumvirate of 20th-century désastres through a stereoscopic lens, in his first linking the dynamic between 2D and 3D to the aftermath of the Hiroshima bombing: once towering buildings flattened by the blast, vaporized bodies leaving behind nothing but charcoal outlines on the pavement. Later, Godard directs an especially igneous ire at James Cameron (“Capitaine du Titanic”) for his 3D post-conversion of Titanic (1997) for its 2012 re-release, the translation of the ship into three dimensions compounding Cameron’s already hollow and insubstantial mirage of the tragic behemoth.

It’s with fitting (and intentional) irony, then, that Godard primarily employs post-conversion techniques to achieve his depth effects in the first half of Les trois désastres. Godard uses 3D to create a shadow-box method for superimposing two-dimensional images: the dominant layer is pushed into the foreground, hovering out from the screen, while the lower layer is recessed in such a way that the top image takes on a plastic materiality while a palpable negative space opens up between the two planes. While it’s a comparatively simplistic approach to 3D technology (especially when set against the Greenaway segment), it is striking in its own right by virtue of Godard’s eye for images and composition.

It is part of Godard’s tiresome brilliance that he condemns new technologies (“Digital will become a dictatorship”) even as he makes compelling and seductive use of them. In one mid-film sidetrack, Godard shows off the scrappy DSLR mount he built in order to capture 3D footage, using the language of a YouTube DIY how-to demo. Yet not only is this interlude disorientingly handsome, it also introduces a phenomenological coup de technique that could have been lifted straight out of Michael Snow’s playbook, in which the image slotted into the right side of our glasses becomes momentarily flipped. While this isn’t exactly a new breed of 3D gotchas, it’s a reminder of Godard’s structural playfulness, even as we feel him glaring from the other side of the editing table.

As in all of Godard’s most successful essays, no matter how heady, didactic, pointed, or messily organized, there is a powerful affect running through Les trois désastres. The source is difficult to pinpoint, especially after only a single viewing (typical of avant-garde cinema), but it’s there in the rumbling tone of Godard’s narration, in the still portraits snapping from a squashed, improper aspect ratio into their correct dimensions (another Snow gesture; cf. the opening of Presents [1981]), and in his appropriation of footage from contemporary 3D films (Cave of Forgotten Dreams [2010], Final Destination 5 [2011], and The Three Musketeers [2011], among others), pointedly presented sans comment. Finally, there are, as always, Godard’s biting maxims, one of which poignantly concludes this poetic seventeen-minute diatribe with the mournful final breaths: “Misfortune seems deep…deep…deep.” Three “deeps,” three “Ds,” steering us to a depth rarely felt in cinema, much less in the unruly chaos of Cannes.