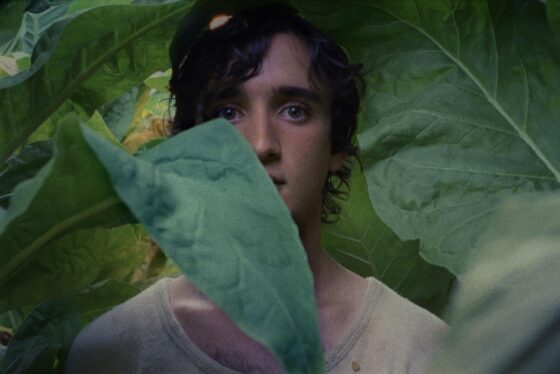 Far removed from any realistic pretence and yet intimately connected to the ineluctability of the present and the obstinacy of the past, Alice Rohrwacher’s latest film unfolds in a state of fantastical rarefaction. No longer bound to the earthly naturalism of her previous two features, Rohrwacher seems to have found in the possibilities of magical realism a more congruous accomplice for her idea of cinema. Happy as Lazzaro recounts the restoration of feudalism, disguised as its own end, through the weightless verses of a parable that sublimates reality without making it more palatable. The film begins in a temporal bubble that predates its own narrative inception—in a time and place that never existed and is therefore only visible to the spectators whose defense mechanisms are immediately ambushed.

“Inviolate” is the name and condition of the sharecropping tobacco farm where the first half of the film imagines itself. Untouched by the passing of time and the advent of progress, 50 or so peasants work the land under literally medieval conditions for the marchioness Alfonsina de Luna (Nicoletta Braschi). Though it’s the last decade of the 20th century, the marchioness has managed to maintain her property in a state of effective metayage (which in Italy was officially abolished only in 1982). “You see: I exploit them, and they exploit him,” the emotionless woman explains to her bored, spoiled son, Tancredi (Luca Chikovani); “It’s a chain,” she adds to prove her point. “Him” is Lazzaro (Adriano Tardiolo), a saint-like young man too kind to ever say no, too guileless and selfless to even suspect egotism in others. An indefatigable labourer in the fields, Lazzaro even supports Tancredi when the latter narcissistically revolts against his mother. To Lazzaro, it is the beginning of a fraternal friendship, for Tancredi nothing more than a passing fancy. Their respective understanding of human relations is incompatible, divided not only by class but also by Lazzaro’s irresponsible and unconditional generosity. His disappearance brings the authorities to the farm, and they are shocked to discover this pocket of feudal life frozen in time. In the film’s second half, the peasants are freed from their anachronistic condition, kindly deported to a nearby town, and soon taste the “freedom” of neo-slavery. When Lazzaro is resurrected and catapulted into the daily joys of contemporary Italy, time has spared his innocence. Even in the big city, where the communal bonds of ignorance and rural life have dissolved along with all other illusions, Lazzaro’s wide-eyed stupor persists.

The film presents a world eternally divided between oppressed and oppressors, framed and seen by two diverging set of eyes: Lazzaro’s, unable to tell good from evil, and Rohrwacher’s, whose overt sympathies never lapse into moralism. The protagonist’s innocence is at once dangerous and surreal, wholly unsuitable to the world around him. His bottomless altruism is the lens through which the brutality of greed comes into focus. The film is thus traversed by an unresolved tension between the injustice of reality and the folly of imagination, wherein kindness is more of a hypothesis than a solution. Religious prescriptions have long expired, and the only divinity left is money. If any spiritual reference is to be traced back from the character of Lazzaro, that would be the “holy fool” of the Orthodox tradition, like the character in Nikolai Leskov’s “Deathless Golovan,” a simple and self-sacrificing man who cares for plague victims regardless of his own safety. His actions are at constant odds with the logic governing society, and represent a complete negation of what God has allegedly created (i.e., the world and its cheerful inhabitants). The passage from the historical Middle Ages to the “human middle ages,” as the director herself has described it, is matter-of-factly imagined without wallowing in the supposed idyll of peasantry. The loss of “humanity” that the shift from agriculture to industrialization implied is here shown as a mere contingency of the organization of labour (and its exploitation) rather than an inherent quality of a vanished bucolic universe. Religiosity is in the film stripped of its clerical connotations and invested with a heretical candour.

Rohrwacher neither intends to denounce nor to accurately render the pits of reality, but on the contrary supersedes them through metaphysical exaltation. Without absolving it of its iniquity, the director looks at the sorry state of Italian society with neither bitterness nor resentment. Preposterous as it may read at a time when any form of poetic transcendence has been made superfluous, the film elevates its whimsical constructions to a level where disbelief is not suspended, but embraced. What’s striking and perhaps even genius about this phantasmagoric operation is that it never feels affected: it breaks through the cynicism of adulthood with the same ease that a fairy tale captures a child’s imagination. The very choreographic matter of the film is composed of oneiric strokes without the need for special effects to transfigure the ordinary and bring grace out of ugliness. Rohrwacher abstains from symbolism and tries instead to liberate the ordinary from its misery, for everyday reality bears in its agony the possibility, however improbable, of a less miserable ending. Unlike in Pasolini or Olmi, to whose films Rohrwacher’s has been likened, Happy as Lazzaro doesn’t idealize peasant life untouched by progress or consumerism, nor does it point to spirituality as a possible salvation. In the film’s first half, kindness gets you exploited, in the second lynched, mistaken for a provocation since only arrogance and prevarication seem to be reasonable attitudes. Sure, it’s a fairy tale, but refracted in the daydreaming conjectures of the film is the shadow of a country on its last legs, caught in a downward spiral of xenophobic hostility and barbaric idiocy.

Happy as Lazzaro belongs to an apocryphal current of Italian cinema that has no canon and had a tepid critical recognition, a current characterized by an eccentric effrontery that is both formal and lyrical; these were films as electric pastorals that have illuminated the outcasts of national narratives. There are traces in Rohrwacher’s film of the rural psychedelia of Pupi Avati’s La mazurka del barone, della santa e del fico fiorone (1975) and of the Christological profanity of Povero Cristo (1976) by the esoteric mason Pier Carpi. The oneiric dimension of Happy as Lazzaro seems also poetically indebted to Musica per vecchi animali (1989), the first and last film by the Italian novelist Stefano Benni, starring the Nobel laureate in literature Dario Fo. But the two directors that feel congenitally closer to Rohrwacher’s cinema are Giuseppe Bertolucci (the more talented of the two brothers) and Sergio Citti, possibly Pasolini’s greatest discovery and bequest. Their work represents some of the bravest acts of anti-conventional cinema in a country where conformism isn’t a weakness, but an industrial requirement. In a vein not too dissimilar from Happy as Lazzaro, both directors transversally captured the idiosyncrasies and salient traits of a country beyond its marketable stereotypes. Their unorthodox filmographies sketch a parallel epic to that of “official” Italian cinema, one that disregards cultural acceptability to go after the more elusive, wacky, and improper aspects of national spasms. While Citti’s misanthropy has hardly any appeal for Rohrwacher, Giuseppe Bertolucci’s humanistic complexity is indirectly echoed in Happy as Lazzaro. Anything but derivative, however, Rohrwacher’s cinema is the unconscious part of a continuum, one driven by anomaly rather than authorship. It’s a drifting cinema that deserves to be followed, as it presents a possibility to stay human even when faced by the daily mortification of imagination.