Episode of the Sea (Van Brummelen & De Haan and the inhabitants of Urk, Netherlands) 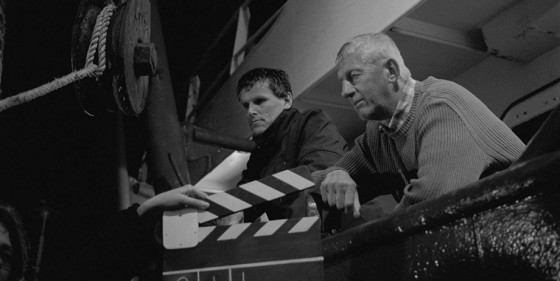 One of the most original films at the Toronto International Film Festival, Lonnie van Brummelen and Siebren de Hann’s ethnographic documentary Episode of the Sea reveals, if not declares, its antecedents immediately. This was not unexpected, since the filmmakers’ previous short in Wavelengths, and one of the best films of 2012, View from the Acropolis (subject of an interview between the artists and Andréa Picard in Cinema Scope 54), hums with a tactile connection to the politicized, historicized landscapes filmed by Jean-Marie Straub and Danièle Huillet. In their second feature, the Dutch artists turn from the land to the sea; and because the sea’s landscape is forever altering, turn from the sea to the men who work it, and whose lives depend upon it.

Building from their exploration of untold and unvisualized aspects of global trade in their 2007 short feature Monument of Sugar, which invokes and records aspects of docksides and sea transport as part of a larger project involving the circumvention of European trade laws through artwork, Episode of the Sea zeroes in on the unusual, highly conservative, religious, and remarkably survivalist Dutch fishing village of Urk. Dissatisfied with the absence in front of their cameras of what happens behind their productions in such films as Monument of Sugar and 2005’s tripartite border landscape essay Grossraum (Borders of Europe)—not only the tales of production logistics and difficulties, but also of the local human element intrinsic in researching and filming—van Brummelen and de Hann have dramatically transformed their method through intensive collaboration with the Urkers, a narrative of evolving filmmaking practice reminiscent of that of Pedro Costa, whose Horse Money played in the same program at Toronto. The artists’ typically fastidious research has been combined with an artistic partnership with the village fishermen to produce a unique hybrid film about the modern existence of a working community with traditions so deep that they feel ancient and ancestral, and a livelihood based on a workspace so in flux they must harden their spirits and dynamize their methods.

In an introductory scroll of text the filmmakers admit that both the fishermen and the artists “share an image problem.” While the resuscitation of the image of the working artist in Dutch culture may currently seem insurmountable, what with recent governmental funding cuts for culture, the difficulty of how to best represent the Urk workers—whose town is often used on national and local television to illustrate outmoded, stuck-in-time extreme Dutch conservativeness—is a challenge Episode of the Sea aggressively tackles. Pulling inspiration from Jean Rouch’s philosophy of working with his subjects to recreate aspects of their lives and history, John Ford’s episodic, chiaroscuro seaman’s portmanteau The Long Voyage Home (1940), Straub-Huillet’s techniques of staging recitations from non-professionals, Peter Nestler’s deeply observant and sharply political documentaries, and with a spiritual link to the best of the National Film Board’s form-challenging portraits of marginalized communities, the result is a porous portrait working many different tacks yet unexpectedly and compassionately coherent.

The woes suffered time and again by the Urk fishermen over their history are exposited both by the film’s introductory texts and the Urkers themselves. The historical policies of the Dutch government are declaimed in a wonderful prologue by Urk women in a dry swamp who tell of how the water surrounding the village has been dammed and how that action progressively and radically changed the landscape, the ecosystem, and their lives. Chapter text carries the narrative into recent history with the intervention of the European Union, which granted the British new and generous quotas and fishing zones to offset the result of the Cod Wars; and the fishermen themselves comment upon working with and against global fishing regulations and commerce in the present. Such a constant, epoch-spanning struggle seems insurmountable for such a small and partially isolated community. Nevertheless, despite this history of obstacles what emerges is a beacon of profound, tenacious adaptability—to technology, to economy, and to life—all found in daily toil and perspicacious community problem-solving. As the filmmakers put it, the Urkers have an incredible ability to “absorb instability.”

Perhaps this is why the film displays a remarkably deft touch, bordering on humour throughout, especially in the Straub-Huillet-style “dramatic” scenes of locals expositing their history, conditions, and complaints—scenes which, because the filmmakers were non-Urk outsiders, were re-written and partially directed by the locals themselves, who have a strong tradition of amateur theatre and chorus. (While Episode of the Sea is a deeply collaborative film, religious objection from members of the community was not uncommon, meaning many Urkers refused to participate in the production at all, while several who did collaborate with the filmmakers behind the camera declined to appear on screen, and were replaced with other locals.) These dramatic scenes contain both a wry, philosophical acceptance of today’s moment, and a deeper, wiser, and more solemn knowledge that those from Urk will no doubt persevere in the future as they’ve so done in the past. The tone is of weariness, anger, and a kind of resignation that mingles pessimism with firmer faiths. “God has brought us this far,” says a woman in a singular, rare dialogue with men. Yet they are not above uncertainty and self-doubt. In the conversation, voicing a myriad of missteps taken, a fisherman ruminates that if things had been done differently, “Mighnt’t prospects have improved?” A moment before the woman responds, a bird is momentarily caught alighting into the frame. “One will never know.” In this combination, the firmness of the people and the randomness of the world—the bird hinting of the village of Urk itself and the greater world outside that, both are never seen—we see the existential factors at play, the stalwart group of remaining Urkers living within unpredictable twists of fate, be they economic, technological, or natural.

These scenes, boldly and directly taking lessons from Straub-Huillet’s discontinuous editing, wide-angle framing, and other techniques of fore-fronting spatially, bodily, sculpturally their human subjects and the places in which they work and converse, are placed within a more standard but beautifully photographed process-based ethnographic approach. Voluptuously shot, like the rest of the film, in black-and-white 35mm, these sections document work aboard the flatfish fishing vessels, as well as the flow of the fish from being caught to being gutted, put on ice, unloaded, sorted, cut, and ultimately preserved. They capture a standardized and ritualized labour far less impressionistic, sensual, mystified, or mythical than Episode of the Sea’s mirror-image film, the Sensory Ethnography Lab digital work Leviathan (2012). The dependable, age-old labour carries with it a stolid solidity, a matter-of-factness clearly the result of a collaboration between filmmakers and subjects.

Each of the film’s titled chapters begins with a lightly humorous, very personal, and highly self-reflexive text which elucidates van Brummelen and de Hann’s process of meeting and working with the locals, important information on how the Urkers grew as collaborators as well as subjects, and, most unexpectedly but crucially, the filmmaker’s analogy between the method, material, and history of these fishermen and themselves as filmmakers. “Analogue worlds,” is how the text connects the two, each using their own mechanical technology (in the film’s case, ’80s-era cameras and 35mm stock) and outdated methods (the fishermen’s boats are also from the ’80s) to continue a tradition they both embody and feel passionately about. This tradition of work links the toil and livelihood of those in the present to those that came before them, fishermen and artists alike. While this analogy initially seems to steal something from Urk, dangerously approaching a flattening of their history and struggles to a plane even with other generically similar lives, instead what is revealed in the confluence is a joy in shared passion and ancestry, a complicity between two wildly different fields of work, both of which are increasingly marginalized. Any sense of over-generalization is dispelled by Episode of the Sea’s grounded details of people, activity, and livelihood. The result is a collaborative film that blends these two fields to such a degree that distinctions can no longer be made—the inhabitants of Urk are listed as co-directors in the film’s literature—and all together creates a richly textural, idiosyncratic, and honest portrait of a special kind of people of the past at work in the present and into the future.