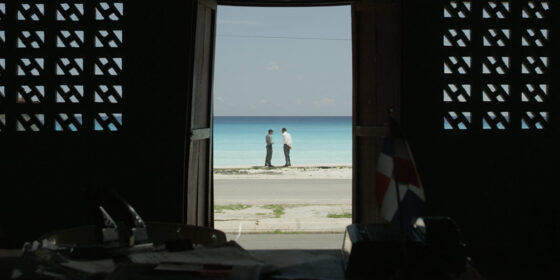 The titular nape of the neck invoked in the word cocote is both a marked corporeal designation and an intimation of something bad about to happen. In Cocote, it represents the site of a beheading and the dreaded aura of imminent retribution. If hacer cogote translates as “to expect something,” then such anticipation is fraught with the ineluctable nature of violence as it relates specifically to Dominican life, which Nelson Carlo de Los Santos Arias carefully, if caustically, conjures with a near-palpable formal arsenal. The film opens to the bark of a sermon, presumably that of a Santo Domingo street preacher, summoning the tale of Diogenes in ancient Greece, who went looking for an honest man, just as the preacher now seeks someone who will love Jesus. The irony of the parable is that the potential disciple is being baited with the promise of a queen-sized mosquito net, five pounds of select rice, one Paco fish, ground beans, spaghetti, and a bottle of oil. Not only is faith posited as a kind of lottery, but dialectics of the sacred and the profane, eternal and ephemeral, nature and custom (physis and nomos to Diogenes) are established within Cocote before the camera effectively rolls, laying the groundwork for de Los Santos Arias’ sensually syncretic vision.

Indeed, religion and language—posited as alternately ineffable and voluble—are ingrained in Cocote’s vernacular, with each seen trying to break free free of an intrinsic limit by brooking the unspeakable through song and the intransigent through violence. The proselytizing sermon provides some clues into the evangelical world of Alberto Almonte, a gardener employed at a wealthy estate who is granted a few days off. The film takes leave of an inanimate poolside tableau and plunges into the more primitive countryside, as Alberto is dispatched to his home after news of his father’s death. “What are we going to do about Dad’s corpse?” he asks his mother and sister while gathered by the light of an outdoor fire. “We buried him yesterday,” is the reply, suggesting that Cocote is in some ways the chronicle of a death foretold. The expectation of Alberto “staying” becomes less about mourning his loss than of avenging it. That his father Eusebio was slain like a dog by a powerful man over an unpaid debt escalates Alberto’s obligation, in spite of any moral trepidation. Cocote charts the legacy of a neck’s nape, from father to son, from violent wound to the curved cradle where conscience, were it more visceral, might reside. De Los Santos Arias channels as much in a shot of Alberto’s head cropped in the frame, his face gathered in a stoic scowl, his neck bent as if vulnerable and exposed to a small source of light.

The narrative’s noir-ish implications are indulged in an almost desultory manner, subordinate to the means with which de Los Santos Arias registers time, place, and incident as subject to boundless rendition. Hence the seemingly inexplicable changes in film stock and thrusts of montage that form an aesthetically ruptured but conceptually contiguous portrait, as if to suggest that, while Alberto might be rendered in monochrome astride a motorbike, or his voice disembodied while a chicken is butchered onscreen, his gravity remains unchanged. That such gravity is not contingent upon the attributes of performance or the affability of character lends the film a documentary ethos of a non-deceptive nature. Abstraction—in the form of stark editorial juxtapositions, travelling shots which blur imposed and diegetic sound, landscapes of unestablished origin—yields a deeper metaphysical consideration of the subject and his environment as entities unavailable to full disclosure but still ripe with mystery. Ultimately, de Los Santos Arias hews to Glauber Rocha’s “Aesthetics of Hunger,” in which there is “a moral question that will be reflected in our films, whether we’re filming a man or a house, no matter what detail is being observed.” The brazen strategy nonetheless expands rather than reduces the question of just what the subject of Cocote is, inclusive of the religious rituals of Los Misterios, Dominican orality, as well as Hispaniola identity in general. The unclassifiable film befits, none too comfortably, the hard-to-classify subject.

Alberto’s haunting is dramatically deprioritized, yet he nevertheless remains at the core of Cocote’s aesthetic, geographic, and spiritual peregrinations. In his oversized white collared shirt and black slacks, a Bible tucked beneath his arm, the sturdy Alberto cuts an incongruous figure, like a melancholic boxer. His homecoming is upset by the collective ritual prayers undertaken on behalf of his father which, rooted in Dominican Vodou, run contrary to his cosmopolitanism and born-again fortitude. Cocote gives ranging expression to such religious influences as they manifest in communal ceremonies called rezos, worshippers capitulating to convulsive states of mourning, the spirits mounting their bodies while paleros pound out polyrhythms to antiphonal song. The latent revenge drama as such is periodically drowned out by an ethnographic musical, just as Alberto is lost in a sea of sorrow to which he can’t relate. Cocote circulates between states of rapture and downtime, the camera mediating the parameters of first- and third-person representation. De Los Santos Arias employs 360-degree pans to exquisite effect, often accommodating multiple experiential frequencies within the same shot, articulating Alberto’s indeterminate state—is it an awakening or an undoing?—with corresponding formal delineation.

Cocote embodies a sustained refinement of de Los Santos Arias’ heterogeneous aesthetic, with his discursive tendencies harnessed now to a narrative arc that’s still fractured, but more expansive. Take for example the grainy television excerpts that randomly appear, of Christians writhing for salvation or peasants declaring their roosters as oracles of Christ’s arrival. De Los Santos Arias contextually grounds these inserts as part of Dominican social reality, the chosen theatre among the film’s gallery of anonymous but not insignificant onlookers. The television becomes an anthropological artifact in the film’s peripatetic inventory of mythical island identity, of which religion and class are the most defining elements. Alberto’s fate is circumscribed by the spiritual divide of a contested God who may or may not lay claim to the island’s souls. “What kind of God has gotten into your heart that I don’t have?” beseeches Alberto’s sister, who expects him to “resolve” the murder of their father.

Where there is a surfeit of morality, redemption, and forgiveness, there is conceivably a spectre of violence, corruption, and sin to nourish it. The spiritual economy in Cocote is thus circular, bound to repeat, its denizens heaving with sorrow and anger, condemned to singing songs of salve. The collective exorcism enacted by Cocote’s ceremonial rites extends beyond the community of the deceased to symbolically include the island’s ancestry itself, with its history full of colonial demons, its language the adaptive legacy of conquest and resistance. De Los Santos Arias, too, appears intent on confronting the cinematic language that has been used to articulate a particular tropical tristesse, and the dogmatism inherent in representations of a Latin American subject who is as inscrutable as Alberto yet with whom a new intimacy might, by way of a heuristic camera, be forged. Such a palpably exploratory means of getting toward an enigma that lives in and through Alberto is the film’s source of vitality. Cocote feels more like a transmission than an exposition, with cinema the medium through which certain spirits speak.

Alberto’s pilgrimage transpires in the all-too-natural world, the film’s geographic chapters offering a topography of the island’s south and an index of its near tangible effects—a landscape both cruel and sublime, the tropical air fetid and fertile, the ambience of lassitude contagious. From this habitat of putrid beauty, de Los Santos Arias coaxes singularly arresting images: a sea as blue as an eye; a dirt road the colour of oxidized iron; a drunken goat hanged and skinned; a funereal shrine that could be a wedding cake. His summative gesture reconciles the film’s lyricism and brutality, naturally culminating on the final day of rezos, in which grief appears to have ceded to a celebration of the dead, the music lent to the release of dancing, and the rum spilt freely. The camera pivots within the nocturnal depths of a village to choreograph the comedown of a protracted vigil while simultaneously waging a mesmeric reckoning of sex and death, lust and violence. White vestments, goes the prayer, are destined to be bloodied, a people undressed by a history of violence. From one garden of evil to another, couples fuck beneath the palms, and life goes on. The tale cyclically returns to Santo Domingo, where nature yields to custom, but it’s not clear to which parable Alberto belongs.