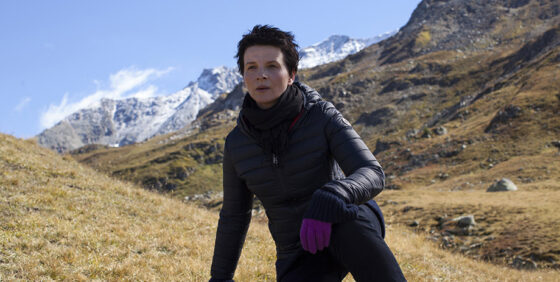 “Ingmar Bergman once said that he makes a film with full consciousness that it will be shown on a screen that showed a Western the week before and will show a romance the week following, and that he likes this situation,” wrote the late Stanley Kauffmann in 1981, apropos of Spielberg’s nostalgia-plundering Raiders of the Lost Ark. “But that isn’t a matter of worship, it’s a recognition of lexical community and common humanity: it’s not to make Westerns and romances.” For his part, Olivier Assayas—who has often referred to his turning to Bergman as a dramatic cum humanistic tonic to the metacinematic japery of the nouvelle vague—has done a not at all bad job of not making the contemporary equivalents of Westerns and romances (let’s say, superhero pictures and tony adaptations of airport thrillers) whilst still engaging with the cinephilic pleasures of film history and the currents of contemporary film culture.

Since Irma Vep (1994)—which rolled together Hong Kong action cinema (in the divine person of Maggie Cheung) with the New Wave and its outriders (in Jean-Pierre Léaud’s presence as René Vidal, a Garrelian burnout of a director) under the saintly aegis of silent cinema (the film’s fictional remake of Feuillade’s 1915 Les vampires)—Assayas has repeatedly and pointedly placed differing kinds of culture with differing degrees of cultural capital alongside one another, astutely noting their points of intersection without likening or equating them each to the other. Absent the Hanekean wrist-slapping of Funny Games (1997), both demonlover (2002) and Boarding Gate (2007) are constructed as plays to, and then sabotages of, audience expectations, adopting the outer shape of slick sexy thrillers only to progressively undo their slick sexy thriller mechanics as they proceed. Less assertively and more successfully, from its title on down L’heure d’été (2008) functioned excellently well as a pleasant, well-constructed bourgie French family drama, whilst that selfsame well-constructed drama brought the very values that the genre is based on (both cultural and financial) front and centre, in its tale of a surfacely pleasant bourgie family faced with the dilemma of preserving or profitably divesting themselves of their ancestral house and contents. Without the conceptual and narrative pyrotechnics of his meta-thrillers, Assayas here managed to interrogate his chosen form—its class basis, its star politics, its own status as cultural product—even as he worked skillfully and unobtrusively within it.

Though adhering very much to this latter mould, the airily titled Clouds of Sils Maria is also beholden to the explicit self-awareness of the former, though “invisibly” within its scenario rather than aggressively in any overt narrative or stylistic ruptures. That double consciousness begins with Assayas’ L’heure d’été star Juliette Binoche playing a character very much like “herself”: one Maria Enders, a world-renowned, middle-aged stage and screen actress who has split her time between “serious” projects, cheque-cashing Hollywood ventures (“I’m tired of acting on wires in front of a green screen,” she gripes of her excursions into comic-book-movie pablum) and miscellaneous transnational product promotions. And the meta gets even meatier with the presence of Binoche’s gamine co-stars Kristen Stewart as Val, Maria’s personal assistant and perpetual troubleshooter, and Chloë Grace Moretz as Jo-Ann Ellis, the Hollywood It Girl du jour with big-time personal problems seeking artistic cred by co-starring with Maria in a revival of the play that had made Maria’s career: a Sapphic, vaguely Strindbergian melodrama called Maloja Snake, with Ellis now slated to essay the sizzling young temptress that Enders once embodied, and the elder actress taking over the role of the middle-aged career woman who lets herself be destroyed by this callow yet charming young minx.

The scenario of an aging star performing a work about youth conquering age is so fundamentally, elementally simple that its dramatic, narrative, and interpretive possibilities are almost limitless, and the various mirrorings at work—both Maria-Val-Jo-Ann in relation to Maloja Snake and Binoche-Stewart-Moretz in regard to Sils Maria itself—are so evident that metatext becomes, simply, text. (Another lesson from Bergman: even in his most assertively modernist manoeuvres—the projector running out at the end of Persona [1966], the interviews with the actors in The Passion of Anna [1969]—the intention is to enhance the dramatic agon of the work rather than distance the viewer from it.) Overlaid on this situation is another perennial theme, more pointed than the former: the question of the continuing viability of “serious” art against mass-market Hollywood juvenilia, a question at least partially bound up in that same generational dynamic.

As stated above, Assayas is certainly no puritan on that point. When he placed an encomium for Hong Kong action cinema in the mouth of a boorish young journalist in Irma Vep, it was both a joke on his own fondness for the genre and an example of that film’s prismatic view of its chosen cultural forms: the meathead contingent of HK-movie fandom as represented by the journalist counterpointing the reverence accorded HK icon Cheung by her directors both on-screen (Léaud’s Vidal) and off (Assayas, who would wed the actress after the film). In Sils Maria, interestingly, the situation is reversed: a sympathetic and intelligent character—Stewart’s Val—advocates for the serious-movie credentials of Hollywood superhero pictures (to Maria’s tipsy chortles), whilst Assayas himself undercuts her with an extended, laborious on-screen spoof of same. (The risible film-within-the-film is Jo-Ann Ellis’ latest mutant-hero sci-fi epic, the kind of project she is purportedly fleeing from to seek seriousness on the stage.)

If Assayas, from the evidence here, has little love for comic-book blockbusters and even less conviction that they can storm the citadel of cinematic art, the problem is that their counterpoint—the high-art fabrication of Maloja Snake—receives a similarly pallid representation. The dynamic tension between cultural forms in Irma Vep derived from Assayas’ knowledge of and investment in those forms, to the extent that he could evoke an entire artistic tradition in fictionalized miniature: e.g., Vidal’s Letteristic-style defacement of his Les vampires footage that takes over the final moments of the film, which is simultaneously an event in the film’s narrative and a conceptual challenge to the audience, an implicit question of what is a “legitimate” way to remake a cinematic classic—or, indeed, what is it to make cinema in the first place.

Apart from the fact that nothing like that same urgency attaches to the revival of Maloja Snake in Sils Maria, the fictional play itself is less fully realized than that snippet of fictional film created for the conclusion of Irma Vep. (It’s perhaps telling that the only moment in Sils Maria that commands the same autonomous space from the narrative proper as Vidal’s vandalism in Irma is a clip from a 1924 short by Arnold Fanck, about the atmospheric phenomenon that gives Maloja Snake its name.)

Medium-specificity plays a certain role here, of course: it’s easier to evoke a cinematic tradition through a few italicized stylistic tendencies than it is to convincingly fabricate a modern masterpiece of European drama through a few lines of dialogue. But as the thematic crux of a film, we can’t evaluate the relative worth of this imaginary work the way we can L’heure d’été’s objets d’art, or demonlover’s 3D hentai and video games, or Irma Vep’s cinematic mash-up; where those others can convincingly be represented as types, a “type” of stage classic just doesn’t fly. Where the interpersonal dramas of L’heure d’été and Irma Vep were informed and inflected by (and inextricable from) the cultural collisions those films so astutely set up, Maloja Snake is merely an echo chamber for Sils Maria’s drama, the means for its (sometimes over-)articulation. And while that drama is nicely turned and intermittently affecting, it lacks that driving, aforementioned question that is implicit in Assayas’ past efforts, to greater or lesser lengths: What is it to make cinema, here, now? While Assayas has succeeded in not—or not just—making the type of easy-watching art-house drama that Clouds of Sils Maria could have been, here that question remains unasked rather than provocatively unanswered.