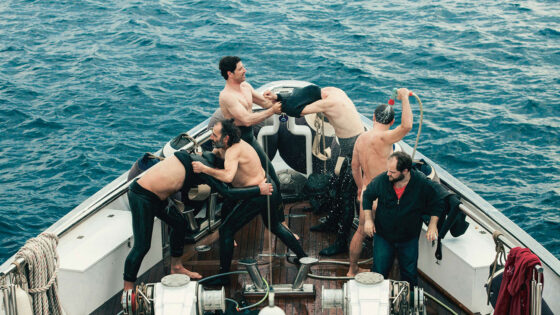 It’s an irony surely not lost on Athina Rachel Tsangari that her Chevalier won the “Best Film” prize at the London Film Festival, considering that its story is built upon an obsessive quest to attain an even greater superlative. But even though the film finds six mostly well-off, middle-aged-and-up males pursuing the all-encompassing title of “The Best in General” while vacationing aboard an opulent yacht, this tale of maritime machismo is far from being Glengarry Glen Ross (1992) on the high seas. What could have been an easy (or worse, trite) evisceration of male ego and vanity becomes something both subtler and stranger in Tsangari’s scenario, which finds the sextet engaged in a game in which each man’s gestures, habits, and inclinations will be evaluated by the rest of the group, the winner to be recognized with the prize of a golden signet ring (the eponymous chevalier). The cogs of surveillance and suspicion soon propel this boat-trip comedy into waters teeming with secrets, lies, barely veiled resentment, and even a bit of bloodshed.

Tsangari sets the tone early with two perfectly chosen images. In a dazzling widescreen shot, she shows the wetsuit-clad adventurers emerging from the sea after a diving excursion and slogging their way up a beach, as if they were primordial beings crawling from the muck. Shortly after, the six men help each other peel off their suits on the bow of the yacht, an image which doubles as both a symbol of fraternal support and cooperation, and a mildly grotesque visual metaphor for revelation, in its suggestion of skin being stripped from the flesh. In the ensuing scenes shipboard, the associations between this makeshift band of brothers start to surface. There is the Doctor (Yorgos Kendros), the owner of the vessel and oldest member of the party; longtime business partners Yorgos (Panos Koronis) and Josef (Vangelis Mourikis); antipodal brothers Yannis (Yorgos Pirpassopoulos)—the Doc’s son-in-law, whose poorly concealed pushiness and arrogance make him an object of general (if low-key) antipathy—and paunchy idiot savant Dimitris (Makis Papadimitriou), whom Yannis has grudgingly dragged along to please their mother; and Christos (Sakis Rouvas), the Doctor’s ass-kissing clinician, former boyfriend of his superior’s daughter and, quite obviously, the patriarch’s favoured choice of son-in-law. The ship’s crew of captain, cook, and cabin boy rounds out the all-male cast, the latter two functioning alternately as silent observers and armchair analysts for the increasingly absurd proceedings.

The decision to set sail with nothing but men marks an obvious new direction for Tsangari, as her previous films Attenberg (2010) and The Capsule (2012) were concerned primarily (in the latter case exclusively) with women. Where the females in those films built up their own parallel societies with their own modes of comportment and codes of conduct, in Chevalier the process is one of stripping down. On this decadently decked-out ship so full of mirrors, windows, and reflective surfaces that it’s already a virtual floating panopticon, the men voluntarily surrender established social privileges—chiefly dignity and privacy—as their egotistic competition extends from waking life to the realm of sleep to where the sun shineth not. (In the prickly business of masculine superiority, a dick-measuring contest is inevitable.)

In a nicely ironic twist, it is the most outwardly assured of the party, Christos (played, amusingly, by Rouvas, a pop star who is one of Greece’s most famous citizens), who suffers most under the ego-destroying effects of this perpetual vigilance. Though his good looks and professional accomplishments initially mark Christos as a top contender for the prized chevalier, his physiological shortcomings (high cholesterol, seasickness) and sexual peccadilloes (revealed by the drunken Yannis late in the game) soon make this winner wither under the pressure of the group’s intensive scrutiny; his self-confidence evaporating by the hour, he pathetically intones “I am the best, my thighs aren’t fat” in front of his multiple bathroom mirrors.

While Tsangari’s trenchant treatment of her characters ranges from the subtly witty (a friendly exchange between Christos and the Doctor as they exercise on rowing machines in perfect synchronicity is juxtaposed by a later repetition of this set-up, with the pair now rowing in counterpoint as they bitterly discuss the outcome of the contest) to the flat-out funny (an Ikea bookshelf building competition), the director resists the urge to escalate the film’s contest towards an overwrought climax. Contrary to Guy Lodge’s claim in an otherwise enlightening Variety review, there is nothing “unfettered” about Tsangari’s approach to her cast of maladroit machos; if anything, it is her restraint that is most commendable here, keeping a potentially volatile premise on a relatively even keel. Chevalier is rich with bickering and petty squabbles, but the film is sustained thanks to the men’s ability to preserve (for the most part) a modicum of respect toward one another, and toward the rules of their absurd game—though this gentlemanly honour is very clearly strategic, since encouraging and reassuring others about their shortcomings is as important as hiding one’s own in a game where each participant is on double duty as both player and judge.

The film’s climax is a fine example of the chop that Tsangari steers her ship through. Having determined a winner, the men disembark from the yacht while the cabin boy describes the game’s dramatic closing ceremony to the cook in the hold. As the participants pile into their luxury vehicles, we realize that the cook and the cabin boy have succumbed to the game’s appeal and started up their own micro version of the contest—one where class, which had gone (mostly) scrupulously unmentioned in the well-heeled edition played above deck, comes to the fore. (“That’s why you’ll never be a chef,” fires the cook; “You’re not a chef, you’re a cook,” retorts the cabin boy.)

For those itching to view Chevalier as a commentary on Greece’s socio-economic meltdown, the fact that it’s the working class on this ship of fools that comes to blows may scan as politically incorrect. On the other hand, this may be a far sharper jab by the director and her co-writer Efthimos Filippou (regular collaborator of Tsangari’s cinematic compatriot Yorgos Lanthimos) in its suggestion of how upper-class power plays can trickle down to those who have far less, and thus far more to lose. As Brecht famously said, first comes bread, then comes morals—and those who are already stuffed can afford to play the good sport. As the film fades out on an armada of similarly well-appointed yachts harboured in nocturnal tranquility, one wonders how many other crews of bored bourgie boys might be tempted to partake in this particular funny game, and who might be sucked down in their wake.