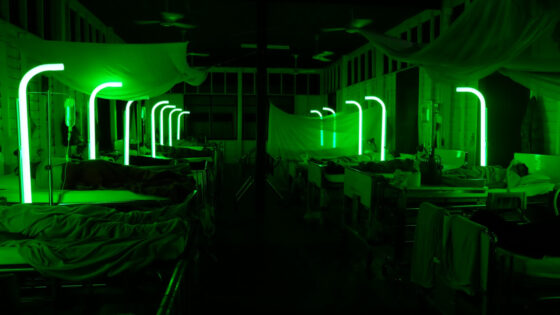 Midway into Cemetery of Splendour, Jenjira Pongpas visits the Shrine of the Two Goddesses with her American husband to make offerings: she gives the goddesses a cheetah figurine for blessings on her bad leg, a gibbon for her strong limbs, and a tiger for the strength of her new son, Itt, one of the soldiers infected by the plague of eternal somnolence whom Jenjira helps take care of.

“We have a new son?” her husband inquires.

There were chuckles in Cannes’ Salle Debussy when Jenjira delivered that punch line. Foreigners won’t get it? They do, honey, apparently big-time (well, except for Thierry Frémaux and the Un Certain Regard jury). In Apichatpong Weerasethakul’s luminous new film, nearly every critical voice in Cannes got the country humour and elegant formalism, the noiseless collapse of the bulwarks that divide fact and fiction, dream and reality, memory and history, science fiction and superstition. They got the soporific beauty found in the sadness of a torn memoir found in a deserted rural hospital. And they got that every film by Apichatpong is a refraction of his other films, a playful, free-associative realignment of his fears, obsessions, impulses, childhoods, hallucinations, and hopes. In Cemetery of Splendour, the disintegration of the wall between image and life, between cinema and truth, is so complete that the ignorant “more of the same” dismissal miserably fails to see how the filmmaker has refined his aesthetics to a mature height.

We all got that, but still there’s another layer, another subterranean graveyard that, to me, distinguishes the new film from his others: the strong, unmistakable sense of social urgency that fills almost every frame of the film. Cemetery of Splendour, set in what looks like a primal realm outside of time, is every bit a film of the present—namely the post-coup Thailand of 2015 ruled by a military junta, the place where we’re stuck in a nightmare from which we struggle to awake. It is also a place of Orwellian absurdity where political expression has been muffled, a poet killed, and artists threatened, even jailed. Amid the enigmatic recollections and truthful beauty, Cemetery of Splendour is the first Thai film that responds to the uncertainty—political, personal, historical—of military-ruled Thailand. It’s all the more astonishing because this dark prophecy is done in the gentlest and most civilized, yet clear-eyed and unflinching, way.

True, Apichatpong’s films always hum with subversive tension that exists just beneath their calm appearances—the Thai-Burmese border disquiet in Blissfully Yours (2001), the foreboding gay love in Tropical Malady (2004), the Northeast’s communist past in Uncle Boonmee Who Can Recall His Past Lives (2010)—and this friction between tranquility and anxiety, between bliss and pain, is a textural element that gives his work a rarified beauty. In the new film, that tension is heightened, as the atmosphere of social suppression has heated up the lava in Apichatpong’s dream alchemy. The double language, symbolism, humour, irony, and metaphorical lucidity is wrought with ominous clairvoyance for contemporary Thailand.

Cemetery of Splendour’s central metaphor comes in the form of sleeping soldiers whose souls have been sucked out to fight an invisible war for ancient kings. That fable, told to Jenjira by the goddesses, is rooted in the primeval dimension, though it also has a sharp edge at a time when the roles of the military and the monarchy have sparked many debates (and criminal charges). If Uncle Boonmee makes a reference to the Northeast’s historical wounds from the communist era, the new film ponders the deeper issue of its legacy, specifically the propaganda of nation-building that has intensified in the past few years: the official pillars of “nation, religions, monarchy” are visualized in a few ceiling shots of the school that has become a hospital, a place of learning that is transformed into a laboratory of oblivion. When Jenjira and Itt (Banlop Lomnoi), a soldier who just woke up from a long sleep, have lunch in the hospital canteen, a giant portrait of a military general covers a wall. That man is Field Marshall Sarit Thanarak, a notorious, Franco-like dictator who ruled in the mid-’50s and whose revolting shadow still looms with every subsequent coup. Of course, Big Brother spawned a long line of brothers, and they’re all watching us. Jenjira jokes about “spies,” and Apichatpong slips in a powerful anecdote in Itt’s diary about a certain political prisoner, an old man who was jailed for a contentious lèse majesté charge and died tragically in jail in 2012. (Apichatpong also touched on his case, quite obliquely, in the Mubi/Lomokino short film Ashes two years ago). In that diary, there are also occult diagrams that are better left indecipherable.

Forgive me if I have to be circumspect. “You’re a foreigner, you won’t get it,” see? Jenjira’s good-humoured jibe takes a darker turn because it has been lifted verbatim from the junta’s all-purpose rebuke of BBC, CNN, The New York Times, The Guardian and every international critic of military-run Thailand. At one level, it mocks the phenomenon of rampant nationalism, which every liberal foreigner can laugh along with, but it also mocks the increasing sense of exceptionalism promoted by the Thai conservatives—the Kingdom of Thailand is so unique that no non-Thais can “get” our situation, and thus every criticism is invalid. To me, this simple joke has yet another bitter layer: Apichatpong is often accused by local dinosaurs of making difficult films to please foreigners, films that Thai people neither care about nor understand. The irony is painful, because Thais should get his films’ deepest nuances; in fact the people of Apichatpong’s home in the Northeast, a region perceived as poor and underdeveloped, should understand his films best, the jokes, the myths, the accent and all (I, too, mostly had to rely on English subtitles). I’m not flashing the exceptionalism card here. It’s just so obvious that Cemetery of Splendour is a cinema of telepathy that draws its spirit from the damp earth and strange lore of that land. Rubbing salt in the wound, it’s not clear if Cemetery of Splendour will be shown in Thailand at all.

But to read the film disproportionately through the socio-political lens is to miss its true genius. Cemetery of Splendour is based very closely on Jenjira’s life story. Apichatpong asked her to write down her childhood and memories, from the time she saw war bunkers in her village 40 years ago to her recent love life with an American soldier, as well as the trauma of her bad leg, the saddest leg in the history of cinema—and those details are blurred, blended, and superimposed with the filmmaker’s own. “It’s as if I possess her in the film,” Apichatpong told me before Cannes. And here comes the real battle fought in the depths of our subconscious: among the many threads in the film, that the most meaningful tension comes from the way intimacy surfaces from the cover of turbulence. The struggles of personal memories, of the freedom to remember, of the will to open our eyes and wake up, of Jenjira’s pain and Apichatpong’s past—all of this pushes against the structural forces of systematic mind-washing and national hypnotism: the nation-religions-monarchy pillars, the iconography of power, the militaristic songs played in the background of the hospital as the glowing tubes try to dispel the soldiers’ nightmares, the moralizing signs nailed to trees in the woods where Jenjira and the psychic Keng (Jarinpattra Reuangram) take a long walk. Cemetery of Splendour is the gentlest of war cries that rallies our personal consciousness to overcome the prescribed, unfeeling, unthinking doctrine.

The last shot sums it up so beautifully. It also suggests that the struggles continue. As a backhoe keeps digging into the tombs of the past, Jenjira insists on opening her eyes to see the present. Dreams are splendid, but it’s only when we wake up from the cemetery that we—here, there, and everywhere—can perceive the true light of splendour.

Posted in CS63, Festivals, From The Magazine, Spotlight