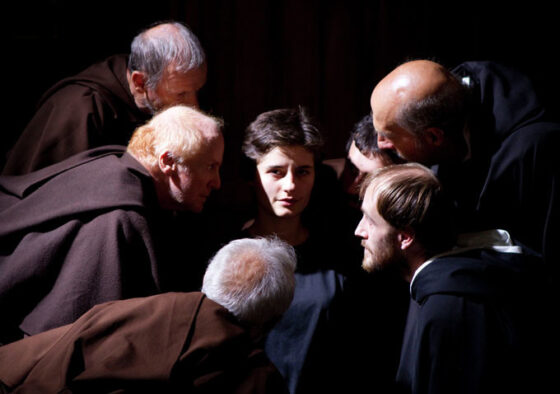 Back in 2006, Marco Bellocchio sent the Rome Film Festival a project called Sorelle, a curious 68-minute whatsit he shot over a six-year period with a MiniDV camcorder. He made it in collaboration with several film-school students in Bobbio (Bellocchio’s hometown), but, with a cast that includes his son (Pier Giorgio), daughter (Elena), two sisters (Maria Luisa and Letizia), and brother (Alberto)—in addition to over a dozen other members of his kith and kin—it was predominantly a family affair. After its Roman bow, the project all but vanished until, four years later, it was resurrected in the Venice Film Festival’s Out of Competition section in an augmented form: it now ran 32 minutes longer, had a surname appended to its title (now Sorelle Mai), and saw its actors age a full decade across its running time (which will very soon be a trending production gimmick). This sort of piecemeal construction and such an exceedingly intimate and self-reflexive scope were, at least to this extent, highly unusual for Bellocchio, but it’s a mode of working that appears to have inflected the conception of his latest film, Blood of My Blood—a beguiling, Dionysian piece of filmmaking that may represent something of a breakthrough in the Italian old hand’s decades-long project of evoking an unconscious, spiritual uncanny from out of a material, decreasingly Catholic world.

As is common among the better prominent Italian filmmakers currently working—a collection more or less limited to the fairly young ones and the really old ones—Bellocchio here again takes as his subject the disappearance of the nation’s past ideals, namely those of the antiquated religious variety. His initial pitch for Blood of My Blood professed a “love for the past, and the need to make a clean break with it”; relative to his contemporaries, whose films (whether good or bad) so often function like reliquaries to the country’s vanishing ways of life, this “move the fuck on already” position comes to stand as something really quite radical and singular in his national cinema.

And so it ought to come as a surprise to no one that Blood’s infatuation with youth—i.e., the potential for rejuvenation in and by the present—is indeed at the fore; entirely apropos, then, that two characters should literally drop dead when faced with their time regained (Thomas Mann’s Death in Venice, as it was for Visconti, likely being a key influence here), and that references to Bellocchio’s early life and work should abound. A cameo by the dining room featured prominently in his canonized debut, Fists in the Pocket (1965), is put to very Baroque use, and, more crucially, there are several reappropriations of major plot points from his The Witches’ Sabbath (1988), a film made at the height of his infatuation with Massimo Fagioli’s psychoanalysis, and which features a gaudy, gothic plot about a woman who, while on trial for murdering a hunter, claims to be a 300-year-old witch, prompting hallucinatory time jumps between balletically choreographed 17th-century magic circles and present-day seductions.

Like Sorelle Mai, Blood of My Blood is an awkwardly balanced portmanteau of fractured ideas, temporalities, and tempers that utilizes the talents of Bellocchio’s family (the blood of his blood, if you will), but it cloaks itself beneath what initially appears to be a compelling, narratively cohesive period drama. Set at Bobbio’s Santa Chiara Convent during the Inquisition and rife with doubled characters, rhymed images, and a cool sense of the impending Enlightenment, the film’s entrancing chronicle of a corrupt witch trial begins with the arrival of a soldier, Federico (Pier Giorgio Bellocchio), who seeks answers regarding the death of his twin brother, Fabrizio. An area priest, Fabrizio was recently renounced by the church and buried in a donkey cemetery after he committed suicide (“Despair is unforgivable”), and the salvation of his soul—the only thing that could bring peace to the brothers’ weary mother—is dependant upon Father Cacciapuoti’s (Fausto Russo Alesi) impending investigation that will reveal whether or not his death was compelled by Satan himself. Naturally, the church sources the divining of the inciting demonic presence to a weary yet beautiful nun, Bennedetta (Lidiya Liberman), with whom Fabrizio had been having an affair, thus setting off a series of ludicrous tests devised to prove her guilt—cutting off her hair to see if she has the mark of the beast on her scalp; dropping her into a river, shackled in heavy chains, to see if she floats; etc.—inevitably stalemating into a cruel punishment of terminal stasis.

Allusions to recent real-world abuses of interrogative torture don’t go unnoticed, nor do Bellocchio’s trademark flirtations with some touchy gender politics—as in Good Morning, Night (2003) and Vincere (2009), a rebellious woman is effectively muzzled by a hypocritical patriarchal system. But Bellocchio’s direction grafts a counterintuitive vivacity onto the horrific proceedings, and it makes it invigorating to watch. Lush, overemphatic low-key lighting hovers against the chiaroscuro ambience, imposing a wonky theatricality onto the film’s carefully constructed naturalism. A Scala & Kolacny Brothers’ choral cover of a certain early ’90s rock ballad anachronistically intrudes on the soundtrack, twice, with the utmost sincerity (likely the most Protestant gesture in Bellocchio’s filmography), while elsewhere, character behaviours impulsively turn soap-operatic and positively zany in the span of a single cut—sadism willing itself into melodrama for melodrama’s sake. Episodes evolve into images of monks giddily stumbling over themselves to crowd Bellocchio’s Joan of Arc figure in anticipation of her Christ-devoted tears; virginal twin cherubs peek out at their princely houseguest through velvet curtains as he readies for bed, exposing themselves for a ménage à trois while alerting him to the threat of mosquitos in his room; and Federico and Bennedetta improbably embrace for an impassioned smooch moments after meeting face-to-face for her confession.

There’s a casual absurdism and plasticity here that feels straight out of late Resnais, and its spontaneous tenor reaches its apex when, at precisely the film’s midpoint and the moment that its dramatic trajectory becomes almost unbearably mysterious, Bellocchio clicks the Refresh key. The film appears to restart, beginning—at first sight—from the same point where it commenced almost an hour earlier, at the convent’s entrance corridor. Quickly, the narrative’s new temporal setting grows recognizably newer (because the space we see is older) and correspondingly weirder. An indelible image—a red Jaguar spied through a keyhole—asserts our repositioning in the present, and the actors have accordingly acquired new roles: Pier Giorgio’s Federico has transmorphed into a shady, government-employed tax inspector, and Bellocchio regular Roberto Hertlitzka, glimpsed earlier as an innocuous member of the convent, is reincarnated into a (highly symbolic) vampyr who goes by the name of Count Basta (wry and crusty, he’s had enough).

And so, as with The Witches’ Sabbath, Bellocchio seems to have been compelled to divide the film, structurally and psychologically, between a savage past and disillusioned present. With his latest, though, the bifurcation was conceived and developed entirely after crafting his plan for the medium-length medieval section—the origin of which was itself an even shorter film that now sits pretty as Blood’s coda, wherein Bennedetta is revisited, a miracle of some form occurs, life and lights flash before our eyes, and momentarily paralyzed paramedics unlock a chord of pathos the likes of which I’m not sure I’ve encountered before in a movie. It can be argued that this transition from the cosmic and erotic to the broadly satiric and loquacious (and back again) effectively kills the movie, draining any of the propulsive energy its narrative had generated, and, more egregiously, rendering its meaning all but incomprehensible. (Cut to Susan Sontag, spasming in her grave.) This is no doubt attributable to the patchwork nature of its construction, but it’s a methodology that manifests an arguably more effective—and affecting—totality, beyond articulation, which puts into practice the film’s sentiments toward freedom and its war against the cyclicality of history. We could ask for a more dramatically sound picture, one less willing to trek into realms of the ridiculous (self-fulfilling prophecies, plush cat beds, Dracula tending a toothache), but it’d mean the loss of the film’s unconscious—a beautiful object I’m not sure I ever want to be concretized into an interpretation, any interpretation. There’s an aura there that left me rapt, for some reason or other; sometimes nothing else matters.

Posted in CS65, Fall Festival Spotlight, From The Magazine, Spotlight