Robert Koehler/CS41, From The Magazine, Spotlight 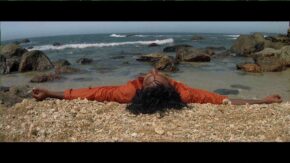 When video games and the American war machine met in an unholy alliance of cultural Armageddon called Desert Storm, the separation between war-making, war games, and war movies eroded and finally dissolved, with its black apotheosis on 9/11, the day New York, in that sickening phrase, felt like a movie. By that point, the notion that any filmmaker of war subjects would aspire to re-creating the reality on screen was at best quaint, certainly against all business interests (because the business of business, particularly those businesses in Iraq, was to ensure that war went down easy, or at least like a kick-ass thrash-metal video), and very likely mad. If the generally positive response to Kathryn Bigelow’s The Hurt Locker—a sort-of-kind-of war-is-hell film—suggests that the pendulum may be turning back towards realism, we still live in a world where the dominant cinematic image of war is far closer to Avatar or such gamer fare as Six Days in Fallujah than to Gillo Pontecorvo.

Yet there’s an entirely different tendency in which the depiction of war is freed from the codes of realism. Perhaps the most facile metric applied to war films is judgment based on degree of veracity, with a certain “truth” (conventionally viewed as the grunt’s point of view) as the standard by which all else is measured. It’s fair to ponder whether this aesthetic is little more than the unexamined inheritance of war culture itself, the widescreen by-product of tales of valour passed down from one generation (including Tom Brokaw’s so-called “greatest”) to another. Conversely, a critical stance, under a Sophoclean notion, can create a separation from the obfuscating immediacy of the event, moving towards something less than real and closer to ritual—and hopefully to truth.

This is certainly part of the mindset in Between Two Worlds, Vimukthi Jayasundara’s continued contemplation of the decades-long civil war that has ravaged his country of Sri Lanka, following his lucid and forthrightly unreal feature debut, The Forsaken Land (2004). Jayasundara is one of those fortunate young filmmakers situated in the subcontinent able to forge close ties with European (largely French) financiers, and if any film from the so-called underdeveloped world demonstrates the perks that flow from Cannes’ Camera d’Or, this would be it. A single tank rumbling through the tall grass represented the war in the first film; the new one is bookended by large group scenes of men going violently berserk, and other scenes featuring a tree exploding into flames, a van crashing into a lake, and a night scene full of revving motorcycles. However, this increase in “production values” hasn’t distracted Jayasundara from his primary purpose of exploring, or more accurately recovering, a film grammar attached to lyrical symbolism.

This symbolism ranges from items that I’m reluctant to dismiss as merely visual decoration (like that exploding tree), since they may have sources in Sri Lankan myth, to those suspended between documentary authenticity and a more universal kind of symbolism, such as when the nameless young man whom the film traces from city to jungle confronts a dead cow, decaying and horribly exposed, being gobbled by dogs. Sometimes, in contrast to this horror, the film’s signs can be effectively elusive—for example, the young man’s first appearance, dropping out of the sky and into the ocean—and even lush, in the film’s intensely atmospheric widescreen images. (In this, Jayasundara is perhaps a little too prone to stretching for images designed to impress his audience—the sole trait he shares with the bigger-budgeted spectacles of Indian cinema.) Nature, a looming presence here, isn’t benign and prettified: it’s liquid, malevolent and murderous, shifting between past and present and tilting toward chaos, the ideal setting for war. Jayasundara here rejects a tension prevalent in Western films from The Birth of a Nation (1915) to Barry Lyndon (1975), in which the ugly senselessness of war is contrasted with natural beauty. While Jayasundara’s view of the city is hardly warm—the streets are littered with discarded televisions and young men lurk ready to pounce on their enemies or any lone, defenseless woman—once his protagonist flees a rebel attack for a supposedly safer jungle refuge, a more dangerous swamp of fatal mutations in the non-urban world unfolds with the inevitability of a myth foretold, with a disturbing though not tragic denouement.

This is, from a thematic standpoint, the most notable departure from The Forsaken Land. Jayasundara is pleasingly scornful of plot, but he is fascinated by the power of oral storytelling. Each film is generated from a tale first recited and then enacted, as if the events we witness would never exist without the tale first spoken out loud—and, crucially to each film’s underlying philosophy, as if the tale is destiny itself. In the first film, the story is classic tragedy, capped by suicide; in Between Two Worlds, it is closer to an Arthurian legend of a prince battling the will of a kingdom which wishes to destroy him, as well as a variation on the universal fable of the holy child magically rescued from destruction. The inescapable doom of The Forsaken Land has given way to a more indefinite, open text. The young man, referred to by some village locals as “The Prince,” is told on more than one occasion that he can see what happened in the past, which is a means for the film to slip between tenses (worlds) and perspectives—sometimes allowing the young man to witness his own actions like a distant spectator. His new reality reaches its bleakest point when in a single shot the young man observes himself bashing in the brains of his sister-in-law in a grassy field, and then making love to her. Whether this is the result of nature’s destabilizing force—something Jayasundara is fond of emphasizing in interviews—or the young man’s impaired eyesight (which the sister-in-law perversely seeks to heal by applying her breast milk to his pupils) remains open.

Just as the war seems to have receded from the jungle, however, it rebounds with a vengeance—first, in the rebels’ poisoning of the local water, and then in a massacre of the village’s young men. The ritualistic forms that take over Between Two Worlds in this final section—particularly the arrangement of bodies on the field in a grand violent dance—echoes the Communist films of Miklós Janscó. As in The Round-Up (1966) and Red Psalm (1972), the exchange of realism for ritual introduces a theatrical sense of history: the camera is far removed, the gigantic spaces flatten the combatants, and the acts of war are transformed into a kind of tapestry. The resulting picture, though, is modern: The Prince is stuck in limbo, neither in one world or the other, a survivor of the war but a frightened creature hiding (as destiny would have it and as the tale foretold) in the hollow of a tree. Jayasundara’s war is a monster with no end, no present or past, entrapping its victims in a ceaseless loop.