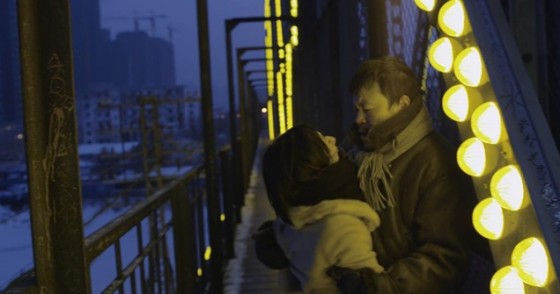 There are aspects of present-day Chinese reality so bizarre that only surrealist-tinged genre films can come close to capturing them. In the press kit for the brilliant noir-mystery-arthouse mash-up Black Coal, Thin Ice, which won the Golden Bear in Berlin, director Diao Yinan observes, “There’s a lot going on in China these days, some of it more absurd than anything you might find in a novel or film. It’s not unusual for artists to find that kind of real-life absurdity getting tangled up with the truths they’re reaching for in their work.” Jia Zhangke would agree: he moved towards genre last year with the baroquely violent A Touch of Sin, which scored its own prize at Cannes.

Although it’s a bit facile to say surreal is the new real in China today, it’s hard to contest that these directors (and others like them, such as Ning Hao, Feng Xiaogang, and Jiang Wen) have hit upon a winning strategy by mobilizing genre-cinema style to do the work of social realism, that traditionally privileged mode of “serious” art cinema in China ever since the classic era of ’30s leftist Shanghai cinema. An added bonus for directors today is that genre play often means audience appeal. The politically engaged realist dramas that thrive at Western film festivals (if they get past the censors) don’t often play well with the increasingly sophisticated, entertainment-seeking Chinese audiences whose ticket-buying power has been growing astronomically with the explosion of the local industry and the increase in the number of screens. So even as they continue to receive accolades overseas, so-called “serious” directors have been learning how to entertain domestic audiences without, hopefully, compromising their artistic integrity.

If Black Coal, Thin Ice (which has American investors), A Touch of Sin, and similar films are actually allowed to be shown to local audiences, we’ll be able to judge the success of this gambit. And it wouldn’t be surprising if Black Coal, Thin Ice were to give the authorities a headache: it’s the darkest shade of noir, replete with dismemberment and sexual violence, though Diao juices it up with a subtly insinuating neon glow, a remarkably daring sense of absurdist humour, and some very witty and stylish flourishes. Taking place in Heilongjiang province in far northeast Manchuria, the film follows a police detective, Zhang Zili (Liao Fan, who won the Silver Bear for Best Actor), who when we first see him is sexually assaulting his ex-wife just after she has amicably handed him their divorce certificate. Shortly thereafter, he’s called to investigate a gory and puzzling murder: a man’s body parts have been discovered in various coal-processing facilities hundreds of kilometres apart. The case leads Zhang down a labyrinthine path to a potential femme fatale, the victim’s widow Wu Zhizhen (Taiwanese star Gwei Lun-mei), as well as to the film’s finest set piece: cornered in a hallucinatory pink-red hair salon, a pair of suspects murder two cops and injure Zhang in a bravura, Coen Brothers-like bit of violent, high-speed (though low-key) slapstick.

In a dazzling coup de cinema, Diao shifts timeframes via a long (split) tracking shot that begins in June 1999 at one end of an underpass and emerges at the other end in the snowy winter of 2004. The camera, moving as if it’s driving through the snow, spots Zhang drunk, slumped on the side of the road beside his motorcycle, circles back to him, and in the middle of the shot switches from a subjective to an objective point of view as a second motorcycle rider emerges from behind, stops, and steals Zhang’s bike. No longer a cop, Zhang has been turned into an alcoholic semi-wreck by his post-shooting trauma, and can now barely hold down a security job. Meeting his former colleagues, he learns of the murders of two more people linked to Wu Zhizhen, and takes it upon himself to conduct a parallel (and none too subtle) investigation of the black widow. As Zhang makes multiple visits to the small laundry where Wu works, the ambiguous relationship between the fixated ex-cop and the almost frighteningly reserved widow becomes ever more complicated, her utter loneliness finding assuagement in his sexual neediness. Meanwhile, Zhang’s dogged investigation unearths further, alternative versions of who has murdered whom, who is still alive, and who might be next to die.

In his previous films—the brilliant indie satire Uniform (2003), about a young man who impersonates a cop, and Night Train (2007), a Béla Tarr-inspired meditation on lost souls—Diao had proven himself as a master stylist with a streak of wicked wit, and here he deploys the long takes, witty mise en scène, and expressive shot compositions of his “festival” films in the service of a more audience-friendly entertainment. (Though this didn’t prevent some critics at Berlin from complaining that the story was hard to follow. It’s not, really: all the information one needs is ultimately presented rather clearly, though nothing one sees or hears is guaranteed to be “fact.”) The correspondences don’t end there. Diao is clearly fascinated by certain motifs, and Black Coal carries over elements from both of his previous films: like Uniform, Black Coal’s plot hinges on a piece of clothing left in a laundry; and like Night Train it features a poignantly sad (though creepily funny) scene set in a small-town Chinese dance club, where strangers lonely as atoms in a vacuum briefly connect via ballroom-dancing rituals.

Diao is obsessed with the light, the mood, the physical shabbiness of Chinese small-city reality. He perfectly captures the feeling of constantly being bundled against a wintertime Manchurian chill, and the pathetic poignancy of the tacky neon effusions which bathe the mundane public spaces in their chintzy illumination. There’s something grandiose and glorious, in a sad, desperately garish way, about the flashily-lit exterior of the dance club where Zhang tracks down an errant clue, and which appears a second time, standing out like a beacon against a very black night, as Zhang and Wu engage in intimate manoeuvres high up in a deserted Ferris wheel.

That club’s name, Bairi yanhuo (“Daytime Fireworks”), also gives the film its Chinese title, and it anticipates the climactic scene where a fireworks shower rains down on some cops as they wrap up their business. More than a visually striking sequence, however, this scene is perhaps a key to the film’s quietly subversive workings. The filmmakers have said that Black Coal has received approval from the Chinese film bureau, and one wonders to what extent, if any, Diao had to compromise to get that permission. Films involving the police have certain requirements, and outwardly at least, Black Coal does provide a formally and ideologically “well-behaved” denouement. However, the fact that we never learn who has unleashed this harmless, yet still menacing, display against the authorities introduces an unsettling undertone to an otherwise neat conclusion. Whodunnit? Some “drunk” on the roof, as the cops speculate? Our now missing protagonist Zhang? Or, as perhaps signalled by that puzzling subjective shot during the time-jumping tunnel shot described above, is the film itself attacking its characters? All the suppressed anxieties, pressures, and sadness of the film’s disturbed principals, who can’t find a foothold in a barren society, find a kind of apotheosis in this explosive climax. Is it joyous? Violent? Defiant? If what’s going on in plot terms isn’t absolutely clear, the feelings that Diao allows to emerge here are as concrete as light and sound.