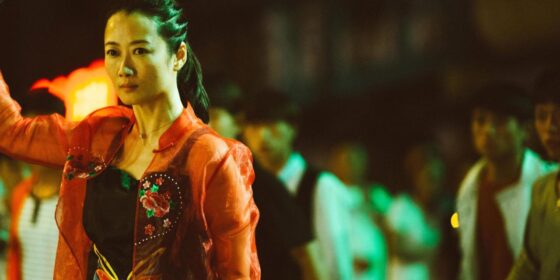 It speaks to the richness of Jia Zhangke’s oeuvre that Ash Is Purest White already feels like a career summation, even though the Chinese director has yet to turn 50. Transition has always been at the heart of Jia’s work, but this, his twelfth feature-length film, explores the theme across three carefully intertwined levels, gently tracing out the progress of a relationship, a country, and his own development as a filmmaker to arrive at what feels like a definitive statement on each of them: nothing changes, nothing stays the same.

The film’s central relationship is between Qiao (Zhao Tao) and her small-time gangster boyfriend Bi (Liao Fan), its dynamic already largely apparent from how the couple dance in a gaudy Datong nightclub in 2001 near the film’s beginning. After romping together in tandem to The Village People’s “YMCA,” Bi’s gun suddenly falls out of his pocket and drops to the floor. Qiao is startled and then disgruntled, even stopping the dance for a moment as a means of reproach. Yet with the music still pounding, it’s as if she’s incapable of staying angry with him for long, as she soon begins to gyrate again with even greater intensity, his misdemeanour already forgotten or taken as par for the course.

A similar pattern of harmony, vexation, disappointment, and ever more weary acceptance will duly repeat over the next 17 years, as Qiao continues to offer Bi her unconditional support regardless of how unreliable, selfish, and weak he ends up being; even their initial love is progressively transformed into something else. The biggest sacrifice she makes for him is when she saves his life by intervening in a highly choreographed street brawl, firing Bi’s illegal gun into the air, which lands her in prison for the next five years. With Bi nowhere to be seen upon her release, she sets out to central China to find him, ending up in the city of Fengjie, before another decade has suddenly passed and the two of them are back in Shanxi Province.

The sense of stasis that suffuses Qiao and Bi’s relationship is thrown into even sharper relief by the signifiers of movement and progress that Jia places around it. The clunky Nokia phone Qiao uses in 2006 may have given way to a smartphone by 2017, but the map app still just points the way back to the film’s initial location, while Bi’s photo and voice messages only reinforce the same attitude towards Qiao he’s demonstrated from the outset: one step forward, two steps back. Both before her prison term and after her release, Qiao is shown on various forms of transportation—buses, cars, motorbikes, ferries, trains—with such conspicuous frequency that Jia appears to suggest that regardless of how much she criss-crosses China, she’ll never find the route to lead her away from Bi. The narration anyway tends to favour moments of transit or apparent insignificance over more conventionally consequential events, keeping many of the key developments in Qiao and Bi’s relationship and their respective lives offscreen, the focus lying instead on the various moods and feelings they trigger, which only reach fruition in between.

Yet it isn’t just Qiao who appears to be travelling without moving. Alongside the numerous places she visits or talks of visiting, the people around her always reference other ones, talking of where opportunity lies or where it has already evaporated, with all these numerous regions and cities gradually coalescing into something akin to a cartography of longing, each destination only a promise, never a certainty. The impression of an entire country on the move is amplified even further when the camera slips away from Qiao to focus on those around her: the rest of the travellers on the bus to Datong; the people holding their possessions by the Yangtze, no idea where they will be resettled; the other passengers on the train to Wuhan, countless points of connection at their disposal. The brief, beautifully tender encounter Qiao shares with one of their number, an apparent businessman trying to branch out by offering UFO tours (played by Zhang Yibai, one of three filmmakers to cameo in the film, along with Diao Yinan and Feng Xiaogang), brings her own melancholy fate into alignment with one of many others being lived out across China. Her decision to leave him slumbering on the train headed for the far-off northwest is the recognition that her own dead-end relationship can likely only be traded for another, yet another change that won’t bring progress.

It’s ultimately the middle section, set on and around the Yangtze at the yet-to-be-completed Three Gorges Dam, that touches on the film’s true essence. The motion of the river provides an apt metaphor for how Ash Is Purest White behaves as a whole, a reading given credence by its Chinese title Jianghu Ernü, whose first word refers both to the gangster credo Bi and Qiao supposedly follow as well as literally translating as “rivers and lakes.” Like a river that narrows and expands by turns along its course, the tempo according to which the plot unfolds is in constant flux: some scenes, like an early drinking ritual or the brawl that lands Qiao in prison, proceed by way of rapid cuts, constant camera movement, fast dialogue, or all three, while others, such as the couple’s first meeting after years apart, slow to a veritable crawl, with each individual framing, shot, and sentence left hanging in the air for maximum muted impact. Yet for all the different moods and registers that feed into the film, Jia’s skill at modulating tone is such that all this heterogeneity still produces one single flow.

Alongside settings and structural conceits, many of these moods and registers seem to have wandered in from Jia’s other works: the rapid-fire martial-arts stylings of A Touch of Sin (2013); the backdrop of Datong familiar from Unknown Pleasures (2002); the three-part structure and repeated pop songs from Mountains May Depart (2015); or the exquisite melancholy of 24 City (2008), to name just a few, while the presence of Zhao Tao, whose wonderfully understated acting style reaches new heights here, equally conjures up all the other characters she’s played over the years. Of all the references to Jia’s cinematic past, the most explicit ones come from Still Life (2006), as Qiao takes the same ferry down the Yangtze as in the previous film, wearing the same shade of yellow and carrying the same water bottle her spiritual cousin Shen Hong did all those years ago, with the same UFO later passing overhead. Despite these similarities, though, everything is different, as what used to be the present has now become the past. This change is visible both in Zhao Tao’s face and in one of the images shared by both films, a shot of a sign on the river bank showing the projected level of the reservoir. One points to a future yet to happen, the other to a past that only exists in memory, the original now buried under so much water.

If it’s impossible to capture the same image twice, there’s no going back as a filmmaker either, although past concerns always stick. Perhaps that’s why, though Ash Is Purest White contains echoes from so many of Jia’s films, it doesn’t directly resemble any single one of them. And it’s once again by comparing the two sets of images which bookend the film that the transitions of the last 20 years can be contemplated, whether in relation to Jia’s career or beyond. The film’s opening scene was shot nearly 20 years ago, with the same digital camera Jia used until 2006, showing documentary footage of a baby on a public bus, marvelling at the hubbub around it. Its final image is a shot of a monitor, which shows what an outside surveillance camera is currently recording, namely Qiao on the street, alone: the direct to the mediated, the collective to the individual, the bare-bones to the sophisticated, possibility to reality.