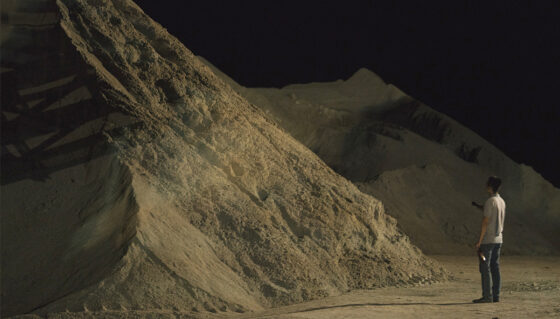 About 20 minutes into A Land Imagined, the nominal protagonist, Detective Lok (Peter Yu), tells his partner of how, on his travels to various locales, he realized that he’d been to all of them before—in his dreams. “The strange thing is, I never saw those places as a child. How is this?” he asks. Something of that same feeling—of having been to a place that one couldn’t possibly have gone to—is what Singaporean director Yeo Siew Hua slyly, surely traffics in with his Golden Leopard-winning third feature. The title refers primarily to Singapore’s extensive, unceasing land-reclamation industry, which since 1965 has expanded the nation’s total area by over 20 percent. But it also raises a natural question: a land imagined, but by (and for) whom?

In a firm rejoinder to the affluent, “garden city” image of Singapore, A Land Imagined unfolds almost exclusively in the nation’s industrial west, the starting point of Lok’s search for Wang Bi Cheng (Liu Xiaoyi), an undocumented Chinese worker injured while on the job in one of the sector’s myriad reclamation sites. Although worn and insouciant in the way only a seasoned detective can be, Lok remains unfamiliar with the milieu into which he ventures. Like most who belong to Singapore’s middle class, he’s largely ignorant of the country’s innumerable migrant workers whose harried existences are defined by undisguised labour exploitation and mired in general uncertainty. When the film opens, Wang has been missing for a few days—and even if he’s not already dead, he might as well be.

From the jazz-scored, rain-soaked nocturne that accompanies its title card, A Land Imagined immediately distances itself from a strictly documentary-realist engagement in the vein of, say, Platform (2000), whose director Jia Zhangke headed the Locarno jury that feted Yeo. But owing to the Singaporean director’s background in nonfiction, the film does exhibit such impulses. With DP Hideho Urata, Yeo treats the perpetually changing shoreline vistas as one would a landscape study, depicting the industry’s workings with a steady, almost Antonioni-esque rigour. He also populates the film with mostly non-actors, actual workers hailing from various Southeast Asian countries, observing their recreational activities, cramped dormitories, and off-hours haunts. One such character, Ajit (Ishtiaque Zico), a Bangladeshi whom Wang befriends not long before his disappearance, eventually emerges as a significant link when Lok and his partner come a-knocking.

The hard-boiled plot of A Land Imagined roughly aligns the film with a recent spate of moody Asian neo-noirs, of which Diao Yinan’s Golden Bear-winning Black Coal, Thin Ice (2014) could be considered exemplary in the way that it packages socio-political commentary within genre—a choice that often has as much to do with commercial interests as with appeasing censorship boards. And so it would seem here. (Yeo has said that beyond the potential, though unrealized, threat of government intervention during filming, the “real issue” will be getting the film approved in Singapore.) Inevitably echoing Polanski’s Chinatown (1974), the film gradually limns a portrait of malevolent (or just fatally indifferent) institutional forces: the private companies running the reclamation projects. From the site’s endless mountains of sand, framed like looming burial sites, emanate an impression of human disposability.

As in any good noir, there’s also, of course, an alluring woman. Here it’s Mindy (Luna Kwok), the steely manager of a 24-hour “e-lover” cyber café in Singapore’s red-light district, the neon-pink spaces of which become the locus of the film’s mystery. Kwok, who starred in Kaili Blues (2016), in which she’s credited as Guo Yue, brings to mind Bi Gan’s own recent noirish odyssey into a disappearance, Long Day’s Journey Into Night. And although Yeo is evidently less interested than Bi in aligning himself with the greats of cinematic modernism, his conceptions of time and space are not without comparable narcotized pleasures. Characters vanish into corridors of memory; scenes are bleared by incurable sleeplessness; a general sense of unreality suffuses the thick, humid air. Whereas Bi opts for neat bifurcation, Yeo conceives of A Land Imagined as an unevenly apportioned triptych that shifts in perspective from Lok to Wang and back—like three panels that fold back onto each other in a palimpsest of hazy memory. The plot itself mostly hews to established forms, but more enticing is what’s conjured by its fracturing—a feeling of uneasy suspension, lest one fall into the gaps and be swallowed up whole.

Such liminal evocations make for an interesting contrast with the hard-edged physicality of the film’s documentary-like material. But insofar as there’s a unifying element, it’s Yeo’s underpinning interest in globalization—also the subject of Argentine director Eduardo Williams’ similarly tripartite The Human Surge (2016), a film with its own scenes of multi-ethnic groups of workers in various states of inebriation and repose. As Mindy and Wang linger on a beach in an impromptu nighttime flight of two would-be lovers, the latter talks about how the sand between their toes was sourced from Malaysia, Indonesia, Vietnam, and Cambodia. The literal amalgam of landmass on which they stand becomes emblematic of both increasingly porous definitions of belonging, and a world in which outsourced labour is the norm.

More than even physical spaces, though, it’s the film’s virtual arenas that tangle themselves in the mind. As in Williams’ feature, a survey of globalized labour is accompanied by the ubiquitous impulse to get online, so the cyber café to which Lok and Wang are drawn in their sleepless peregrinations is also the nexus of the industrial sector’s veritable human surge. For many of Singapore’s migrant workers, such places offer approximations of companionship (via online sex-chat rooms), listless entertainment (in the form of video games and bootlegged movies), and, of course, air conditioning, which they are swiftly reminded is not free. Unable to sleep, Wang whiles away his nights with endless rounds of Counter-Strike (a first-person shooter that will be instantly familiar to viewers of a certain generation) and chats with an unknown figure who may or may not be involved in his later disappearance. Although Yeo’s film contains no transitions as virtuosic as the coup de cinéma leaps of Williams’ continent-hopping feature, he maintains the same technology-driven feeling of interconnectedness. What’s intuitive here, and also indicative of how A Land Imagined operates, is a way of relating to the world in which the virtual is as significant as the physical—or indeed, translates into the physical. So perhaps even the impulse to sleep is diminished, for the state of things is such that nothing and no one feels out of reach—and yet for some, there’s paradoxically no way to leave.

Taking this line of thinking to its logical conclusion late in the film, Yeo plunges the viewer into an oneiric reverie, offering a God’s-eye view of no less than a round of Counter-Strike. In what amounts to a virtual tracking shot, the camera floats through, beyond, and above the video game’s primitive (and thus timeless) arid terrains and glitchy 3D borders, accompanied by Wang’s dreamy ruminations. It’s an exhilarating yet foreboding sequence, for, at least in the game, such freedom exists only when one dies. What Yeo thus evokes in A Land Imagined is a sense of limitless possibility literally stretching out to the horizon, even as the spectre of work—its accompanying threats of unemployment, injury, and exploitation—holds sway over a vast majority of the world’s population so that the title’s far-off land remains out of reach. All that persists is the feeling that you’ve seen it before, that you’ve somehow been there, in a dream perhaps. But then, you couldn’t possibly have, because it doesn’t exist—not just yet. And for most, it might as well not.