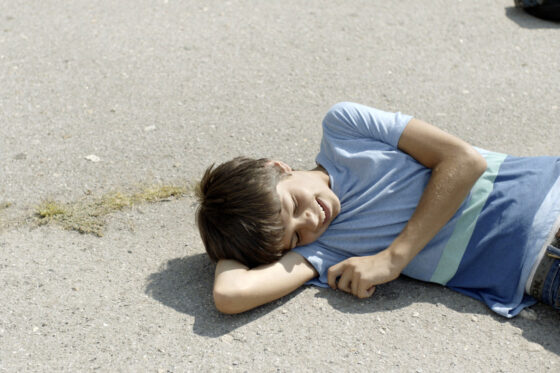 A modest work of considerable grace and insight, Ilian Metev’s 3/4 quietly stands as one of the most accomplished narrative debuts of the year. Genuinely compassionate, the 36-year-old Bulgarian’s directorial voice echoes forth confidently from the opening frames of this most understated of family dramas. Following the Semaine de la Critique fêted documentary Sofia’s Last Ambulance (2012), Metev’s first narrative feature––winner of the Filmmakers of the Present prize at this summer’s Locarno Festival––begins with a deceptively intricate passage that simultaneously sets forth the film’s distinct formal strategy and its suggestive way with narrative. Through a series of slowly retreating, slightly offset, and downwardly tilted tracking shots, a peculiar schoolyard scenario swiftly takes shape: legs and feet jut out from the corner of each frame; a water bottle is kicked back and forth across an asphalt playground; and on the soundtrack, a group of young boys is heard calling out instructions from offscreen, where they’ll remain, heard but unseen, until the camera stops mid-stride and one of the boys sprawls out diagonally on the blacktop, bisecting the composition. I’d call it Bressonian, though the effect is less austere than inviting, seemingly intuited rather than inherited.

This brief opening establishes a few key strategies that Metev will continually return to throughout the film––namely, the discreet dispersal of information (both verbal and visual), the considered arrangement of bodies and movement within his 3:2 frame, and the use of backwards tracking shots to both cover various conversations and bridge the film’s outdoor locations with their interior counterparts. Set in the suburbs of Sofia, 3/4 (pronounced “Three Quarters”) follows an astrophysicist, Todor (Todor Velchev), and his two children, the adolescent Niki (Nikolay Mashalov) and his teenage sister Mila (Mila Mikhova), as they spend one last summer together before Mila departs for an important piano audition in Germany. Their absent mother is mentioned only briefly, in one fleeting conversation (“Have you seen mom crying? Does it make you sad to see her like that?”), her unexplained estrangement providing the film a crucial structuring absence and the characters a sense of accumulated personal history. Evidence of her absence and the pre-emptive effect of Mila’s departure is felt most acutely in Niki’s adolescent antics, harmless if exasperating displays of hyperactive angst (that’s him in the opening sequence, sprawled out on the asphalt, encouraging his friends to use his body as a skateboarding obstacle) that Todor has trouble controlling while he’s working long nights away from home. Niki thus spends most of his time annoying his sister, and Mashalov, in his acting debut, exudes a natural charisma and poise that impressively tempers some of Niki’s more untoward displays of juvenile spirit. (“I’m great. Many people have told me so,” he declares in one of his most ingratiating speeches.)

Mila and Todor maintain a mostly healthy and loving relationship, though each harbours anxieties the other can’t quite quell. Rather than take advantage of his daughters’ last few months at home, Todor, a relatively youthful father, spends many of his evenings offering advice to a junior coworker (Alexander Kurtenkov) and confiding in others about the emotional solitude of being a single parent. Mila, meanwhile, continually toils in frustration at the piano as her instructor (Simona Genkova) attempts to keep her focused, a self-evident wealth of talent belying a lack of confidence in her own abilities. Despite Todor’s best intentions, his efforts to discipline or to offer encouragement to his children often come across as timid or misguided. In perhaps his most telling moment of parental indecision, Todor opts to chastise an unruly Niki, whose hectoring appraisal of his sister’s uncertain future has sent her running from the dinner table, rather than comfort a visibly rattled Mila, whose persistent apprehension threatens to stifle her creative passion. (In this sense, the film’s musically inflected title seems to nod as much to three-quarter time as it does a fractured family unit.)

There’s a remarkable intimacy to this and other domestic scenes, an effortless sense of family dynamics that feels organic and speaks fully to Metev and co-writer Betina Ip’s command of character and commitment to the quotidian moments that shape everyday life. There are no antagonists in 3/4, let alone villains––no dark or sadistic undercurrents meant to reflect contemporary Europe’s fraught sociopolitical temperament. By almost every conceivable tonal and stylistic metric, the film feels utterly removed from whatever continues to pass for serious international art cinema. (In the context of recent Bulgarian cinema, represented most prominently by Ralitza Petrova’s oppressively grim, multiple-award-winning Godless [2016], Metev’s deft touch and empathetic ethos stand even further afield.)

Buttressing this delicate sensibility, Metev and cinematographer Julian Atanassov continually find inventive ways to frame their actors and stage the drama. Action often begins offscreen, with characters and objects entering the frame at unexpected intervals. Moving with an understated finesse, the camera regularly focuses on the actors’ bodies and their physical features, such as when Mikhova is first introduced in a composition that lingers lovingly over her shoulder as she plays the piano, before shifting 180 degrees to a slightly elevated perspective, bestowing a vaguely angelic air on her performance. With its shrewdly integrated construction and near-weightless rhythmic drive, the film most closely recalls the work of Argentina’s Matías Piñeiro. (One wonders if Piñeiro, who sat on the jury that awarded 3/4 in Locarno, recognized a bit of himself in the film’s casually unfolding dramaturgy.)

But the film’s signature image––the reverse tracking shot––is also its most unique and subtly imaginative flourish. In a sly rebuke of arthouse cinema’s tired use of the following shot––a shorthand device meant to force an unwavering subjectivity that’s been rendered impotent by everyone from Gaspar Noé to Joachim Trier to Alejandro Gonzalez Iñárritu––Metev opts instead to track his actors backwards as they walk in stride with the camera. These lengthy outdoor sequences, assembled by Metev––working again as his own editor––in an otherwise fairly recognizable shot-reverse-shot style in which the camera nonetheless never stops pulling back as the actors (usually Mikhova and Mashalov) walk and talk in naturalistic rapport, ultimately reinforce the film’s welcoming essence: these aren’t characters you want to follow so much as observe and consider in harmony with their thoughts and surroundings.

Metev wisely saves the most tender of these exchanges for his finale, one of recent cinema’s most poignant denouements. In what will likely be the family’s last outing before Mila ships off to Germany, the trio set out on an afternoon hike. Again tracking the characters from the front, Metev allows silences, subtle expressions, and a few touching words (“Save your strength. There’s a long ascent ahead”) to articulate more than any prior argument or future display of emotion ever could. For 80 generous minutes we’ve watched as this family has grown and confronted private hardships. In these closing moments––perhaps the only time in the film when the viewer wishes he or she could see what lies ahead––they appear, if only temporarily, to have found a certain peace. What this beautifully restrained, deeply resonant film suggests is that sometimes that’s enough to keep moving forward.

Posted in CS73, Festivals, From The Magazine, Spotlight