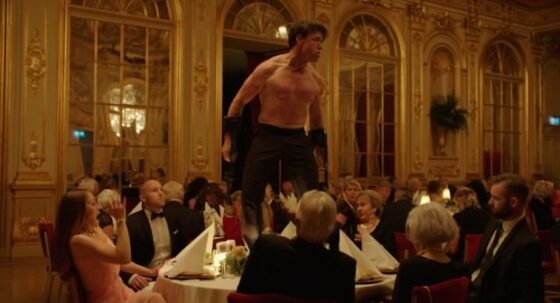 A secular credo patchworked from the Golden Rule and the Universal Declaration of Human Rights is engraved on an altar: “The Square is a sanctuary of trust and caring. Within it we all share equal rights and obligations.” Before it was a two-hour and 20-minute Palme d’Or winner, The Square was born as this hackneyed art installation by Ruben Östlund and his producer, Kalle Boman. First appearing at Vandelorum Museum for Art and Design in Varnamo, Sweden, a second Square was later constructed in Grimstad, Norway, with another expected to be paved in Vestfossen before the end of 2017. Östlund and Boman state in the film’s press kit that the project has “the ability to improve people’s attitude towards strangers and could potentially have a positive impact on the ‘bystander effect,’ a social phenomenon in which individuals are less likely to offer help to a victim when other people are present,” hopefully bringing an end to class struggle, alt-right fanaticism, and institutionalized prejudice, one four-by-four-metre box at a time.

Östlund’s film The Square is a rambunctious lark, puerile and playful, and too often given to moralistic explanation. It works more as a series of provocations eliciting a wide range of audience responses than a diatribe on inequality, but the always ambitious Östlund wants to have it both ways. The lesson here, of course, is that Christian (Claes Bang), the curator of a contemporary art museum in Stockholm, falls fantastically short of the moral standing idealized by The Square, the first work he purchases after his museum has received a healthy donation. While The Square is built, Christian, after having his phone, wallet, and grandfather’s cufflinks stolen in a feeble attempt to “help” a woman in peril—Östlund’s first staging of a social experiment—tracks the culprit on Find My Phone with the help of an employee. Together they decide to drop threatening flyers through every mail slot inside the thief’s low-income apartment complex. In the gallery, however, he presents a refined public face, his polite, sophisticated manner its own form of marketing and itself an ongoing performance. (Rehearsing a speech for the organization’s donors and members, Christian’s oration is intentionally stilted; he puts his cue cards down and restarts warmly as if he were ad-libbing.)

The Square’s approach to behavioural psychology has its foundation in Östlund’s previous film, Force Majeure (2014), which treated narrative like an experiment devised by Stanley Milgram, recounting the collapse of a marriage after a father leaves behind his wife and children in an avalanche. The couple and their friends unpack the meaning of that act, reveal the cowardice of this subconscious reflex, and annihilate the man’s macho posturing.

In The Square, Östlund combines this brand of social psychology with relational aesthetics, constructing scenes as something akin to what Nicholas Bourriaud used to characterize the ’90s avant-garde, namely an “arena of exchange”—a fully-fledged artistic form born from spheres of human relations such as meetings, encounters, and events. Östlund frames these spaces of human interaction and crafts set pieces that subvert sociability. During a Q&A with a pyjama-wearing artist modelled on Julian Schnabel (Dominic West), an audience member with Tourette’s Syndrome blurts out obscenities. Östlund, shooting the scene with shot-reverse-shots of the panellists and the crowd, elongates the proceedings and sits back and observes individual reactions as the stately ethic of the gallery space is sabotaged. Responses are risible, disgruntled, and even supportive of the helpless heckler, who, the argument goes, is blameless because of his psychological disorder; the artist sits befuddled, unable to answer a question. For The Square, artistic engagement is obscured at best and futile at worst.

Marketing likewise entrenches itself in the social fabric of The Square and skews the original intentions of the art. Golden metal forged into the ground outlines the shape of the installation, but its true form comes in interpersonal relations, and any hindrances or outside powers that impose themselves on The Square become an unequivocal part of its makeup: the “arena” is altered and the rules established by the gallery or artist changed. That plays out here as an outsourced duo devises a provocative video depicting a white blonde child beggar blown to smithereens inside the bordered sanctuary, exemplifying the marketing slogan, “How much inhumanity does it take before we access your humanity?” This transpires while Christian is in the thick of events associated with retrieving his phone, which distracts him from forestalling the obvious impending controversy. As usual, the media is outraged, the public devours the video and makes it go viral—to the glee of the ad kids—and the events snowball, forcing Christian to resign before the exhibition has even opened.

Therefore, the potentiality of emancipation bestowed on The Square—the installation—is incompatible with the primal impulses that overpower social-contract niceties, and as basic carnal needs and desires like hunger and lust protrude into the art world, the fruitlessness of the entire endeavour is revealed. At a members’ event in the museum, the swarm of attendees descend on the complimentary food like vultures, ignoring the disgruntled chef who lists the menu he so passionately designed. When Christian sleeps with an American journalist (Elizabeth Moss) who strangely houses a pet orangutan, their floppy coitus recalls the swimming pool scene in Showgirls (1995). A game of power and trust ensues after Christian orgasms, fearing what Anne will do with his sperm and embarrassed by his own bodily functions.

True to Östlund’s broader roots as a behaviourist, the representation of the gallery also indicates the basic structures and practices that govern other spheres, not the least of which includes the film world. In a moment of self-reflexivity conflating Christian’s position as curator with Östlund’s as director, a prolonged performance piece tacitly evokes the slogan of the marketing team’s viral video. As an unhinged artist bursts forth and crashes an awards gala dinner, the question is not merely directed at the spectators in the diagesis but also the film viewer. Imitating the gait of an ape—bent forward and propped up on crutches—the artist (Terry Notary) leaps on tables, harasses patrons, and halfway strips the clothes off a woman, until finally a bystander rips the creature off her, at which point the previously complacent spectators pile on top of him in an orgy of violence. As the moment is extended and heightened, the performance no longer seems harmless, but rather trepidatious, disturbing, and real. We laugh, then cringe, but only because we presume the performance has, in the interim, gone awry and ceased to be a performance. “How much inhumanity does it take before we access your humanity?”

As with the films of Paul Verhoeven or Michael Haneke, public spectatorship fully actualizes The Square’s aesthetic gamesmanship. While the real-world installation may be nothing more than nifty marketing, the self-reflexive union formed between the two Squares is utterly ingenious. If The Square the film has satirical insight into the art world, it’s precisely because it stands in opposition to The Square the installation, with one being an example of the most facile form of relational art, and the other lampooning art’s ambition to enact tangible social change. Given the relationship of the installation to the film and the film to the installation, it’s impossible for one work not to overcloud one’s view of the other. They exist in conversation, as a unified arena of exchange; the utopian aspirations of the installation’s quasi-behavioural hocus pocus is the ultimate end for the film’s merciless cynicism and attack on political correctness, picturing a world where art and cinema are second to the human race’s primary concerns: eating, fucking, and maintaining one’s privilege and power.

Posted in CS71, Festivals, From The Magazine, Spotlight