Mark Peranson/CS50, Festivals, From The Magazine 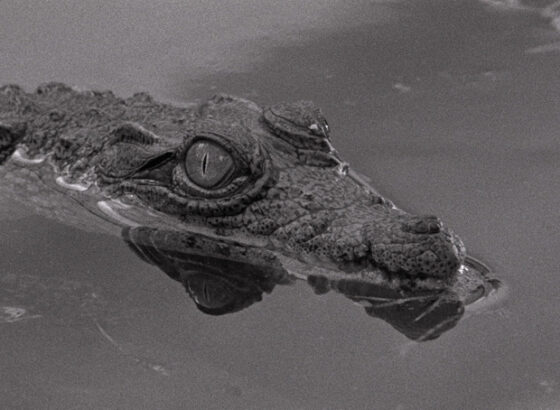 “The famous saudade of the Portuguese is a vague and constant desire for something that does not and probably cannot exist, for something other than the present, a turning towards the past or towards the future; not an active discontent or poignant sadness but an indolent dreaming wistfulness.”—A.F. Bell, Portugal (1912), by way of Wikipedia

An impressively dense yet fleeting concatenation of doomed love, colonial guilt, a reflection on the changing aesthetics and characteristics of cinema, Tabu is a deeply emotional and heartbreaking film; like its female protagonist, it’s bipolar, both depressive and ecstatic. Though it looks and feels like a different beast than Gomes’ first two features, Tabu shares with The Face You Deserve (2004) and Our Beloved Month of August (2008) the same preoccupation with storytelling and the perceptual contrast between “reality” and “fiction”; there’s even a hint that Pilar, who we see searching for emotions through cinema, is projecting a “fictionalized” version of her relationship with her sad-sack painter admirer onto the impulsive, highly cinematic passion of Aurora and the dashing Gian Luca Ventura…(Follow the Spector.) Even if the imaginary is key to Tabu, I’m getting ahead of myself, and I apologize in advance for over-intellectualizing about a film that struck me as impossibly moving. But there’s no arguing about emotions, and Tabu is a film that gets more complicated the more I think about it. And what about that crocodile?

Like Our Beloved Month of August (whose internecine relations might have earned it the title Tabu), Tabu is divided in two parts—“Paradise Lost” (in high-contrast black-and-white 35mm) and “Paradise” (in the gauzier, fuzzier 16mm of recollection and reminiscence)—with Gomes once again operating under a set of rules stemming from the film’s structure. The first rule relates to his stretching and condensing of cinematic time. In “Paradise Lost,” the triumvirate of women—the benevolent, religious Pilar, the elderly, guilt-ridden Aurora, and the suffering, saintly servant Santa (played by, as Screen Daily put it, “Pedro Costa favourite” Isabel Cardoso)—walk through the gloomy present as if treading through molasses, crunching on prawns, or lighting cigarettes with the weight of history on their shoulders; it brings to mind Rivette’s reflection that due to social and technological change, it would take twice as long to tell the love story of It Happened One Night (1934) today. In “Paradise,” by contrast, Gomes turns Capra on his head, as It Happens One Year speeds by in Aurora and Ventura’s past, months leaping forward from cut to cut as Aurora’s belly grows and the two lovers approach, come together, fall apart, and reunite for one momentous night.

The second productive restriction is the dense and literate voiceover written by Gomes and Mariana Ricardo, and read by Ventura over the entirety of the film’s second half, among the longest (and one of the greatest) in film history. Removing all space for dialogue, the voiceover for that very reason captures the feeling that (as Gomes notes), “Nothing can be said,” the lovers’ silence foretelling the fated end of their affair. That the film is able to sustain this delicate mood for an hour—aided by an off-kilter sound design that includes some, but not all, of the sounds acted out on the screen (i.e., the splashes when Ventura is thrown into the pool in the party scene)—is one of its most impressive technical accomplishments (or, to use the Berlin jury parlance, “innovations”). Suspended between the silent and sound cinemas, but set in the early ‘60s, “Paradise” becomes a lovely, piano-twinkling object of memory.

Much was made in Berlin of Tabu as a cinephile’s film, and indeed it’s kind of a bastard child of Gian Luca Godard (A bande à part [1964] comes most to mind, maybe because of the voiceover) and Out of Africa (1985) (Ventura’s voiceover begins, paraphrasing Blixen, “She had a farm in Africa”). Also name-checked: Letter from an Unknown Woman (1948), Mogambo (1953), Errol Flynn, Crocodile Dundee (1986), probably a whole lot of Portuguese cinema I can’t place, Murnau’s Sunrise (1927) (seen in the name of a nursing home, and reflected in the name of the female lead, Aurora—which was also the film’s original, pre-Puiu title) and of course Murnau’s premature 1931 swan song, with which Gomes’ film shares a title, an aspect ratio, a format, a colonial setting, maybe a shot of a flower, and a pair of doomed lovers. Murnau projects a Western fantasy of the South Seas with the natives rather than the colonialists at its centre, a conflation of tropical paradise with the innocent love whose fated end comes, after their escape from their island, due to the law of the gods. Into the mi(d)st of Gomes’ Mount Tabu the doomed lovers are brought together by an escaped crocodile, the silent witness to their affair. In his Paradise there is no innocence to begin with, no fall from grace, but rather a tale of history’s “winners” being told by Ventura, the romantic loser.

More than a cinephile’s fantasy, Tabu is an ironic discourse on the colonial notion of saudade (the longing for empire present in Portuguese literature) intertwined with the romantic notion of saudade in Ventura’s longing for Aurora (or Pilar’s emotional longing: you choose). The dimmest take on Tabu charged Gomes with racism, but as Aurora writes in one of her letters, “The image you keep of me hardly resembles reality.” The title “Paradise” appears on screen as servants sweep the floors of big-game hunter Aurora’s colonial estate—ironic distance is established immediately. But it’s even more powerfully expressed in the climax, when Gomes turns the camera on its side for a POV of a dead character who shall remain nameless (and whose murder, I’m compelled to add, is soon after established as the trigger for revolution), then switches to the POV of two black children watching from a slight distance, visually capturing the mindset of colonialism from the perspective of the dominated.

All films contain within themselves traces of their production. In accepting his two prizes in Berlin, Gomes gave similar speeches hailing the independent craftsman of Portuguese cinema (like DP Rui Poças, here doing amazing work), as well as directors like Monteiro, Oliveira, and Costa—creators of a cinema of letters—and speaking out against the current government, who have slashed not only film funding, but erased the Ministry of Culture entirely. With the country’s transformation back into a Third World state, Portuguese cinema is in the process of being colonized as well: while Murnau, after travelling to Polynesia and immersing himself in the local culture, ended up ditching his Hollywood backers and funding his Tabu himself, Gomes required an international co-production to undertake his African safari. But like the explorer who turns into the “sad and melancholic crocodile” in the prologue (narrated by Gomes himself), the director is an adventurer, and there are lands of cinema that remain uncharted even after we’ve visited them; it’s a question of cinematic memory. If Tabu is a “critic’s film,” its references are not destinations but points of embarkation to a place where incantations, ghosts, and a white-suited band out in Africa playing “Be My Baby” in Portuguese evoke a past we don’t even know we know; as Aurora says, “The memory of the world is eternal and no one can escape from it.” The film’s formal play is itself taboo for a neoliberal European co-production, and that crocodile, representing time and memory, is also Portugal itself.

Posted in CS50, Festivals, From The Magazine