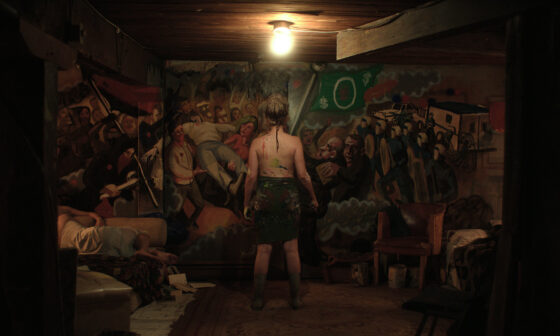 How in the world did Ceux qui font les révolutions à moitié n’ont fait que se creuser un tombeau (Those Who Make Revolution Halfway Only Dig Their Own Graves) win the Best Canadian Feature prize this year at TIFF? I’m wondering this not because I think the film is unworthy, or necessarily less impressive than a number of other notable 2016 Canadian premieres. Rather, my surprise is connected to a jury of industry professionals (two producers, a director, and a critic) throwing their support (and $30,000 CAD) to a truly gruelling, designedly brutalizing, three-hour immersion in Québécois radical politics—a marathon featuring numerous (staged) scenes of violent self-harm interspersed amidst grainy documentary footage of student protests, anguished, didactic voiceovers, scads of full-frontal nudity, and pounding waves of ALL CAPS epigrams plastered all over the screen. How did that happen? Did the jury members not notice a nice, 97-minute, Cannes-feted Xavier Dolan movie sitting right there in front of them?

Juste la fin du monde would actually have been one appropriate alternate title for Mathieu Denis and Simon Lavoie’s film, which charts the entwined personal and ideological apocalypses of a quartet of post-Maple Spring activists. Or else maybe Mommy Issues: while it’s probably unfair to reduce a movie of such unwieldy size and ambition down to a single theme, the eternal struggle between adolescent purity and adult pragmatism certainly stands out above all others. After being arrested and put on trial for opening a canister of gas in the Montreal subway system, Emmanuelle Lussier-Martinez’s “Ordinne Nouvo” (the name’s an alias) bristles in the defendant’s box while her mother tries to convince the judge that her daughter is a good person; as the scene goes on, her shame at being bailed out mutates into howling anger, overt cruelty, and finally the mocking laughter of a teenager stomping up the stairs to her room to sulk.

There are other crucial generational stare-downs here, at a rate of roughly one per protagonist—a deep-core structuring device that belies the surface messiness and chaos of Denis and Lavoie’s restlessly shape-shifting frames and image formats (a strategy similar to but distinct from Dolan’s narcissistic play with aspect ratios). In a flashback, cozy suburbanite “Guitizia” (Charlotte Aubin) plunges a knife into the shoulder of her father as he scolds her spoiled-brat naïveté, a shocking outcome that directly sets her on the path to radicalization; “Tumulto” (Laurent Belanger) meets his estranged dad for a melancholy pasta lunch and leaves before finishing his meal; transgender prostitute “Klas Batalo” (Gabrielle Tremblay) physically attacks an older john and then collapses weeping into his arms; he relates his youthful dalliance with revolutionary literature before telling her that one day she’s going to grow up, look in the mirror, and see his face staring back at her.

Those twinned fears of mortality and capitulation are the driving forces behind the group’s activities, and if much of the time their austere co-habitation lifestyle, loftily elevated rhetoric, and outrageous methods—which range from tasteless but harmless pranks like mailing envelopes of flour to the Prime Minister’s office to coordinated acts of vandalism-bordering-on-terrorism—seem to far exceed the immediate concrete issue at hand, namely university tuition hikes, that’s sort of the point. Denis and Lavoie understand the obsessive, all-consuming, and murderous fervour of the quest for ideological purity. Lest that make Ceux qui font les révolutions sound simply like a critique, its relentless stridency and blatancy stand in solidarity with the characters, whose essential humorlessness is never made funny, although a sequence when Belanger’s soft-boy strips naked to apologize in front of the others for committing “the sin of nostalgia” might elicit a bitter laugh from some viewers (at least until he starts viciously punching himself in the face for penance). Make no mistake: just as the beautiful losers here hopelessly invoke Karl Marx and Rosa Luxemburg as role models, the filmmakers are also futilely chasing their own role models, from the Godard of La Chinoise (1967) and Deux ou trois choses que je sais d’elle (1967) to Getino and Solanas to Michel Brault, whose spirit also hovered above Denis’s previous, more conventionally produced FLQ period drama Corbo (2014).

They’ve also placed themselves shoulder to shoulder with a number of contemporary filmmakers who’ve recently tackled the personal ravages of activism, and at different points along its massive running time, Ceux qui font les révolutions compares interestingly to Olivier Assayas’ Après mai (2013), in the excitement and sexualized stimulation of joining a community of one’s peers; Kelly Reichardt’s Night Moves, with the guilt of incurring human collateral damage after a symbolic gesture; and Betrand Bonello’s Nocturama, in the dangerous intersection of ardour and narcissism. To their credit, Denis and Lavoie are at once more formally daring than Reichardt and Assayas and less sentimental than Assayas or Bonello (whose fish-in-a-barrel climax detracts from his film’s intelligence while sharpening its affect), but they are neither as gifted nor especially inclined as these world-class directors at the business of making drama, hence the embrace of such a crazily splayed-out presentation. The typically calorie-free descriptor “epic” applies here, except that it’s an epic of fragments, some of which cut deeper than others. Volume is the strategy: if one disparately stylized vignette doesn’t work—like, say, a sub-Kuleshov bit of associative montage in which a bilingual speech by Justin Trudeau is cut against shots of Aubin on the commode, or direct-address recitations with the actors naked and splattered with paint—it’s followed in short order by something else.

It’s thus very difficult to adjudge (unless, I suppose, you are TIFF’s jury) Ceux qui font les révolutions a success or a failure; indeed, a true dialectician might conclude that for all involved—the filmmakers and their avatars—the two outcomes exist on some indivisible continuum. (The same goes for visceral discomfort and boredom, which are both conjured up with about equal consistency here.) There’s no point (or pride) in making cinema halfway when it’s about the necessity of living up to one’s values, but at the same time, the most positive ostensible outcome of activism and/or art—that is, bringing a new idea to an audience—is obviated when you not only don’t give the audience an inch, but actively keep them at a switchblade’s length the entire time. A late shot of Ordinne standing defiantly but unseen in front of a massive, crystalline glass window separating her from an emissary of the bourgeois class she wants to shock and appall sums up the plight of directors ready and willing to practice a self-immolating form of filmmaking (and the end credits reveal that it’s at least partially Telefilm’s money that they’re burning). Besides hopefully helping Denis and Lavoie further recompense their fearless, fully committed actors and other collaborators, the TIFF prize will probably mean that a movie surely intended as unwatchable for a certain segment of the population may travel further, in terms of distribution and exhibition channels, than its creators could have possibly guessed. Congratulations are in order, as well as condolences.