By Christoph Huber In CS68, Features, From The Magazine, Interviews 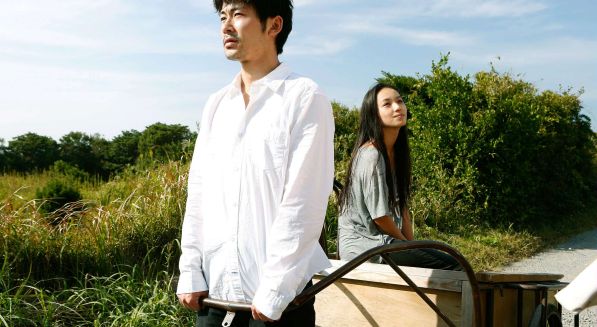 It could have been another quiet day in the country, but it wasn’t meant to be: Shiota Akihiko’s Wet Woman in the Wind starts with an idyllic shot of a forest glade dappled with sunlight, the only hint at the absurd convolutions to come being a chair positioned incongruously at the edge of an unpaved crossing. On closer inspection, that chair is surrounded by a tiny pile of debris, slyly anticipating the human flotsam to be observed in the next 77 minutes—starting with formerly respected Tokyo playwright Kosuke (Nagaoka Tasuku), whom failure and excessive sexual promiscuity has driven to the countryside for self-reflection. Coming around the corner, cart in tow, he picks up the chair, to be added to the eclectic collection of items adorning his makeshift isolated country home.

Next, reading a book on a pier by the water, Kosuke is distracted by a woman bicycling through the industrial port landscape—and right into the water, her bike toppling over. Unfazed, Shiori (Mamiya Yuki) steps out next to him, casually pulls off her wet T-shirt to wring it out, and strikes up a one-sided conversation, ignoring Kosuke’s helpless irritation about this breast-baring intruder: “You live here? I have nowhere to go.” At this point—the credits have started running—Kosuke simply tries to walk out on the situation. Too late. “You think you can escape me, but you can’t,” Shiori says, neatly summing up her purposeful escalation plan for the brief runtime of Shiota’s funny and light-hearted but also deeply felt movie, whose motto might be the sentence emblazoned (in English) on the T-shirt Shiori has slipped out of so naturally: “YOU NEED TISSUES FOR YOUR ISSUES.”

Five directors have been assigned to work in the old house style: write and shoot in less than two weeks, aspire to a length of under 80 minutes, and work with complete freedom so long as the sex keeps coming on a regular basis, the traditional rule of thumb being at least once per reel. Apart from Sono Sion (established as one of Japan’s leading risqué filmmakers on the festival circuit as well as in popular fan circles) and Nakata Hideo, famous for The Ring (1998) and other horror hits (though truly overqualified for the Roman Porno revival given his history: he started out as an assistant at Nikkatsu back in the day, working closely with director Konuma Masaru, one of the movement’s leading lights and subject of Nakata’s 2000 docu-tribute Sadistic and Masochistic), the quintet consists of Shiraishi Kazuya (The Devil’s Path, 2013), Yukisada Isao (Go, 2001), and, luckily, Shiota.

Takechi won the lawsuit, and the publicity surrounding the trial helped to pave the way for a pink-movie boom, with major figures like Wakamatsu Koji (just having quit Nikkatsu to establish his own company) specializing in a more potent mixing of sex, violence, and politics, while Mukai Kan pioneered a soon-dominant S&M soft-core subdivision in films like Sexy Partners (a.k.a. Lustful Companions, 1967). The unexpected successes of pinku eiga, which had been mostly an independent affair for its first decade, provided a business model for the majors when Nikkatsu seized on the Roman Porno idea, parlaying its assembly-line production of action and other genres in the ’60s into a steady stream (roughly six per month) of modestly budgeted sex films that offered a bit more runtime and decidedly higher production values than their indie pink competitors could afford, usually around 7.5 million yen (about $75,000 US, twice as much as a “normal” pink film), with much-touted all-colour deluxe widescreen treatment. Other studios briefly jumped the bandwagon (like Toei coining its Pinky Violence line) but Nikkatsu had the most lasting impact, with more than 700 films (according to Jasper Sharp; others claim a four-digit figure) produced in-house during Roman Porno’s 17-year reign.

No assistance was needed to provoke another censorship scandal. The ban of Yamaguchi Seiichiro’s Love Hunter (1973) led to a long-winded obscenity trial that was a major source of inspiration for Kumashiro, even as Yamaguchi unmistakably had dramatized his own situation in Love Hunter: Desire (1973) before he was called into court, emerging vindicated in 1978 (or 1980, if you count the prosecution’s futile appeal), at which point hundreds of Roman Pornos and the allure of the scandal had long since turned the tide. By then, Konuma had successfully initiated an S&M cycle (strongly connected to novelist Dan Oniroku) with Flower and Snake (1974), while Sone perfected the Angel Guts formula following the manga work of Ishii Takashi. Hasebe Yasuharu translated his action proclivities into controversial “Violent Pink” terms with his mid-to-late ’70s Rape!-fests, twisted by heirs like Kurosawa Naosuke (Zoom In: Rape Apartments, 1980) and Yamashiro Shingo (Female Cats, 1983) into stylized perversions. Ritually compared to Dario Argento in the West, the whole development was emblematic of the ero-horror overlap that peaked during the decade.

Although Kumashiro was established, also amongst critics, as the “King of Roman Porno” almost within a year, J. Hoberman still couldn’t help noting Kumashiro was “unmentioned in any major English-language history of Japanese cinema” on the occasion of a belated New York retrospective by the Japan Society in 2001, while plausibly comparing the director’s “mix of formal sophistication and crudely telegraphed emotions, as well as dark humor, political backbeat, and skilled deployment of limited resources” to “similarly prolific” filmmakers like Sam Fuller and Rainer Werner Fassbinder. The digital age has since ameliorated the lack somewhat, allowing for a more fine-grained appreciation of Kumashiro’s uniqueness. His breakthrough hit Ichijo’s Wet Lust (a.k.a. Following Desire, 1972), starring famous stripper Sayuri Ichijo as herself, naturally performing her notorious routines, established key themes—amongst other things, celebrating freedom of expression by basically ejaculating into the face of censorship. In addition to Lovers Are Wet, Kumashiro would go on to do hilarious things with shape-shifting black bars and other inventive things to taunt the mandated hiding of genital areas usually accomplished via strategic blocking.

Simultaneously, Ichijo’s Wet Lust also celebrates female physical desire and physicality, but Kumashiro typically couples emotional highs with detachment, repeatedly asserted in disillusioned portrayals of a sex trade that (like the censors, Kumashiro pointedly stresses) turns the same women into objects, as in Street of Joy (1973), a correlative to Mizoguchi Kenji’s Street of Shame (1956). Superbly condensing the Marquis de Sade’s roman pornographique epic Justine into the Roman Porno Woods Are Wet: Woman Hell (1973), Kumashiro makes his critique of power most manifest, not least in a perverted sex murderer’s accusation: “What you accept as ethical is contrived by those in authority so they can control people.” Yet for all its profound darkness, Woods Are Wet also attests to Kumashiro’s playful side, as in another unforgettable bit of dialogue about sexual transcendence: “Like a donkey fucking a hippopotamus.” Kumashiro’s Black Rose Ascension (1975) is predicated purely on pitch-black pinku self-satire (though the resident Roman Porno director is modelled after Oshima), and The Woman with Red Hair (1979), a fêted, impressive-depressive study of sexually triggered responses, sees the protagonist singing to his own penis. Kumashiro’s near-remake Die Frau mit dem Roten Hut (translating as The Woman with the Red Hat, 1984) channels its own brand of absurdity simply by being transposed to Bavaria via a German-Wakamatsu co-production.

Although Kumashiro was inclined towards literature—he tackled the Divine Marquis as well as major Japanese writers (in 1974 alone both Tanizaki Junichiro’s oft-filmed The Key for Nikkatsu and Bitterness of Youth, after Ishikawa Tatsuzo, for Toho)—he was an instinctively cinematic creature, preferring an intense handheld-camera style with Brechtian interpunctuations. These structural gambits play off against an appreciation of his actors’ seemingly unadorned physical and performative investment, celebrated in extended takes: for example, Oh! Women: A Dirty Song (1981) features singer Uchida Yuya as an asshole would-be rock star who could be the Japanese twin of Rip Torn’s abusive and self-destructive country singer in Daryl Duke’s Payday (1973). Like a Rolling Stone (1993), Kumashiro’s swan song after years of declining health and increasingly sporadic production, still sticks in the brain decades later as one long body-mind trip of yakuza stabbing and compulsive cleaning. Whereas Kumashiro’s women mostly manage to channel a life force, these men, like the overwhelmed guy meeting The Woman with Red Hair and the self-denying anti-hero of i, gravitate towards destruction and dissolution, the latter moving from a mishap involving film cans, setting up cinema as ironic contrast to (and insightful comment on) life, to possibly ending up literally dead in the water, stabbed in the back, and skidding—woman in tow—into the sea on his bike.

Which brings us back to the beginning of Wet Woman in the Wind, whose first landscape shot already plays like a Kumashiro homage. Shiota channels his predecessor in theme, content and, occasionally, form, but registers bitter insights in a completely different, resolutely upbeat register. Retired artist Kosuke has fled to the countryside like the protagonist of Lovers Are Wet, and is also reminiscent of the self-indulgent rocker in Oh! Women: A Dirty Song, which even contains a phone call (during sex) which Shiota mirrors in a tongue-in-cheek reverse angle. Given to intellectual pretensions, not least about himself, Kosuke recedes into his ivory tower while wild wolves howl outside—a reminder of the real world both ominous and funny, as Shiori keeps calling herself a dog, emphasizing the pleasure aspect of (wo)man’s animalistic side. The artist demands “solitude” to “think deeply,” while Shiori keeps re-intruding in ever more comical and excessive ways, until Kosuke has no choice but to relent. To give out more details would mean to spoil some of the film’s finest surprises—often coming via sly juxtapositions with or complications caused by sharply characterized supporting players—not to mention curtailing some of its best gags, all delivered in a fluent yet slightly nervous tone, bolstered by Kida Shunsuke’s percussive jazzy score.

The opportunity to tackle other challenges has clearly come back with Wet Woman in the Wind, its adult, always amusing battle of attraction and repulsion played out in ever more hilarious variations, from Kumashiro-like songs through deadpan dialogue (notably with a “totally badass” surfer) or puzzling and curious cuckold interludes to the choreographed chair fight. Of course, this includes ever wilder sex, habitually practiced even while working, phoning, or eating—it becomes the art of life. (“If making delectable coffee is art, then is having delectable sex an art too?” Shiori teases her boss early on, with predictable results.) Meanwhile, the supposed soul-balm of cultured art is profoundly ridiculed via acting advice, especially concerning amateur attempts to stage a Kosuke play, whereas the bad poetry passionately recited by an ordinary workman sees him rewarded with one of the sweetest payoffs in recent cinema. Unlike love, delectable coffee, or delectable sex, false art remains powerless in the face of an escalation process whose punning literalness in the resolution comes off as surprisingly liberating rather than heavy-handed: the director gets fucked (hopefully repeatedly) while awesome sex brings down the (makeshift) house. The wild wolves may still howl outside, but the power of sexuality can set you free. For a moment, that is.