By Adam Nayman In CS66, Features, From The Magazine 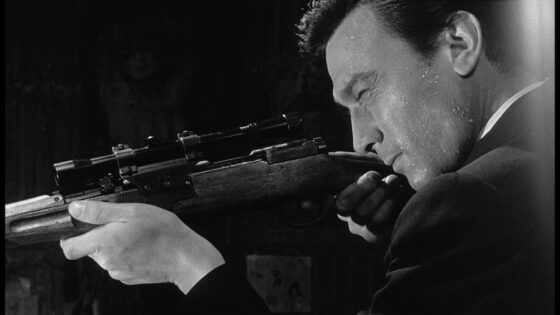 In the waning days of 2015, public intellectuals as varied as Salman Rushdie, Bill Maher, and Kareem Abdul-Jabbar floated (or sky-hooked) the notion that Donald Trump was a “Manchurian Candidate,” despite the fact that none of them—or the many, many pundits and think-piece artists mining the same vein of pop-culture reference—could agree exactly how the putative Republican frontrunner fulfilled that role. While the concept of Trump as a Democratic mole planted to divide and conquer the GOP, thus paving the way for a Clinton Presidency 2.0, was comically satisfying, the alternate hot take—that The Donald’s vociferous anti-Islamist rhetoric functioned dually as a recruiting tool for ISIS—became harder to laugh off as his public appearances incited greater and greater furor. The words of one Eleanor Iselin come to mind: “Rallying a nation of television viewers into hysteria, to sweep us up into the White House with powers that will make martial law look like anarchy.”

The idea that Donald Trump could memorize the sort of rousing, precisely written stump speech that Angela Lansbury’s Beltway Clytemnestra outlines near the climax of The Manchurian Candidate (1962) is perhaps laughable in and of itself. Whatever else one can say about James Gregory’s McCarthy manqué “Big” Johnny Iselin—the title character of John Frankenheimer’s masterpiece—he’s good at taking direction from his handlers, whereas Trump seems resolutely unmanageable, his televised rallies projecting the atmosphere of a freakishly well-attended open-mic night at a comedy club in Hell. Rewatching The Manchurian Candidate in 2016, on the occasion of a gleaming new Blu-ray edition from Criterion, is an instructive lesson in how the passage of time normalizes that which was once appraised as outrageous—but without diminishing its power to shock, appal, and entertain.

“Does he have a girl back home?” That’s the question posed in the film’s first scene by the members of an American platoon stationed in Korea circa 1952. The subject of the query is Staff Sergeant Raymond Shaw (Laurence Harvey), whose lack of interest in the earthly delights on offer at a local brothel indicates a stubborn sense of fidelity (or, given Harvey’s familiar prissiness, possible homosexuality). Like most of the jokes in George Axelrod’s screenplay—which stays true to the cold, cynical spirit of Richard Condon’s source novel while jazzing up the dialogue and characterizations—this one deepens upon reflection. Raymond’s old lady stateside is his mother Eleanor, whose role as the soon-to-be-brainwashed sharpshooter’s “American operator” is both narratively shocking and slyly redundant. Even before instructing her hypnotized son to orchestrate the staged assassination of a presidential hopeful, Mrs. Iselin is pulling Raymond’s strings.

Free will is a precious commodity in short supply in The Manchurian Candidate. The plot’s focus on mental manipulation is very much of its time: post-World War II advances in psychotherapy and pharmaceuticals led the American military to experiment with behaviour modification for a host of reasons (including the empathetic de-programming techniques showcased in John Huston’s suppressed 1946 documentary Let There Be Light), and the same thing was assumed of the Soviets under the anything-you-can-do-we-can-do-sooner impetus of the Cold War. But while the film’s wildest and most memorable images come swathed in a somnambulistic fog—enough has been written over the years about the soberly surrealistic “Garden Party” sequence that I won’t waste space recapitulating it here—even fleeting exchanges express the difficulty of self-directed choices. When Major Bennett Marco (Frank Sinatra), who correctly suspects that he and Shaw’s heroic homecoming from Asia has happened under false pretenses, is told by his superior officer to take a mental health break, he bridles against the instruction before letting his eyes fall meekly to the floor. For a soldier, an order is an order.

What The Manchurian Candidate suggests is that people are altogether suggestible, or maybe that while the worst are full of passionate intensity, the best—and likely the rest—lack all conviction. Even the true believers reveal cracks in their ideological armour: the story’s Orientalist Caligari, a Dr. Yen Lo (wonderfully embodied by the American-Egyptian character actor Khigh Dhiegh), confesses that he plans to spend a free afternoon in New York City at Macy’s, ticking off a “most appalling” shopping list demanded by his better half back in Red China. “I’m sure you’ve all heard the old wives’ tale that no hypnotized subject may be forced to do that which is repellent to his moral nature, whatever that may be,” he grins, baiting his comrades and the audience with a very bitter pill: not that brainwashing is an all-powerful tool, but that the unconscious impulse to obey may be more deeply hard-wired than the rational decision to resist.

Hence Raymond’s late-breaking acknowledgement—achingly well-acted by Harvey, whose natural reticence was perfect for the part of a curdled high-society princeling nurtured in a viper’s nest—that “they can make me do anything,” an admission of a sickness marked by what Dr. Lo diagnoses elsewhere as “those uniquely American symptoms, guilt and fear.” Of all the ironies in Condon’s story, the sharpest might be that Raymond doesn’t value his Medal of Honor until he sets his (mostly broken) mind to killing his mother and stepfather in lieu of his assigned target. When Marco breaks into Shaw’s sniper’s perch in Madison Square Garden an instant too late to stop the shooting, he sees his friend tying the medal around his neck. The righteousness of this act is mitigated by the fact that it’s also an expression of a latent matricidal rage that supersedes this veteran’s defense of his country. When he puts Mrs. Iselin in the crosshairs, Raymond is hardly doing anything that’s repellent to his moral nature.

Appropriately for a film that wears its classical references on its sleeve—Sinatra’s pronunciation of “Orestes” is a highlight—The Manchurian Candidate tempers its filial psychodrama with great, heaping gobs of Juvenalian satire, starting with a platter of caviar in the shape of an American flag that gets smeared beyond recognition by gluttonous dinner guests. There are other visual japes throughout, like Senator Iselin reflected darkly in a portrait of Lincoln (who he’ll later impersonate at a costume ball alongside his wife’s shrewdly controlling Little Bo Peep) or a shot of the benevolent, principled (and doomed) Senator Jordan (John McGiver) flanked by the wings of the stuffed eagle stationed on his living-room mantel. Semiotics are front and centre here: Raymond’s trigger mechanism—after being primed by the invitation to “pass the time by playing a little Solitaire”—is the Queen of Diamonds (the “Red Queen,” as Marco calls it), and the painted lady’s conflation of Soviet and Oedipal imperatives has an audacious clarity. The pop-iconographic imagery deployed by Frankenheimer and Axelrod exerted an enormous influence on Anglo-American cinema to come; not only in such obvious conspiracy-thriller descendants as The Parallax View (1973) and Blow Out (1981), but also in the public assassination climax of Nashville (1976), the forgotten-patriots postscript of Red Dawn (1984), or that amazing sequence in Tinker, Tailor, Soldier, Spy (2011) where a roomful of boozed-up British operatives sing along to the Russian national anthem at a staff Christmas party, at once secure in and scornful of the cozy ideological certitude of the Cold War.

The disappearance of The Manchurian Candidate for nearly 25 years after the assassination of John F. Kennedy—reportedly but unofficially at the behest of a chastened and embarrassed Sinatra—only added to the film’s stature. Re-released to theatres and home video in the late ’80s, its outrageous vision of a country bedevilled by political polarization and paranoia was reactivated like a sleeper agent buried in deep cover. Jonathan Demme’s tepid 2004 remake—which substituted Iraq for Korea and the equity firm “Manchurian Global” for Siberian Svengalis—was (rightly) pilloried for failing to successfully update its source material, which was of course a compliment to the original, and in more ways than one. Not only did the new Candidate pointlessly torque the storyline so that Denzel Washington’s Marco becomes the unwitting assassin rather than Liev Schreiber’s Shaw, but, by trying to shape events to suit then-contemporary D.C. realities (released as it was in the hinge period between Dubya administrations), it tweaked Condon and Axelrod’s deeper themes of ineradicable obeisance and strained agency to score the same easy political points as any number of other liberal Hollywood thrillers.

Three election cycles after its own remake—not to mention the myriad, wide-scale American upheavals of the last six decades—Frankenheimer’s film comes out the other side to (re)assert itself as an enduring political thriller largely due to its eschewal of actual politics, its “critique” limited to cheeky, equal-opportunity fun-poking at the assorted ideologies it surveys: Iselin’s buffoonish far-right fear-mongering, Yen Lo’s casual hypocrisy, and the saintly Jordan’s ineffectual liberalism (via that famous shot where the perforated politico appears to bleed milk). The problems it poses transcend politics: it’s more invested in those primal forces of guilt and fear, and how they can be exploited by cunning villains and clumsy oafs alike. Ideologically incoherent and narratively insane as it is, Mrs. Iselin’s scheme—to play on the threat of foreign invasion to actually accomplish that invasion, and then turn the tables on her own foreign accomplices—continues to exert power because it posits a constant, pervasive, and permanent sense of dread as the only sane response to a mad world (a theme that Stanley Kubrick picked up and ran with two years later in Dr. Strangelove).

This is the paradox at the heart of The Manchurian Candidate: that guilt and fear are both the symptoms of a uniquely American disease, and the instruments with which to cure that illness. It is Marco’s terrifying nightmares of the Red Chinese “Garden Party” that spur him to untangle the conspiracy; it is Shaw’s remorse over the things he’s been forced to do while under mind control that leads him to perform his final, fatal act. Ultimately, guilt and fear are not merely symptoms of an American disease but also evidence of American moral order, the proof of American conscience and humanity. While Marco’s reading of Shaw’s once bogus, now authentic (and posthumous) citation for extraordinary bravery at film’s end is ironic, it is also—and more importantly—utterly earnest. Demme’s version botches this too, having Washington’s Marco ape Dirty Harry by throwing his dead friend’s medal into the ocean—an anti-establishment gesture that’s both dramatically and intellectually feebler than the complex, contradictorily heroic coda of the Frankenheimer film.

In this, the original Candidate is a product of an earlier era of moral certainty—of a frayed but fundamentally sound faith in American institutions and the values they purportedly embody. What continues to make the film feel so stingingly relevant, in this simultaneously more wised-up and dumbed-down time, is that its disorienting, crazy-quilt patchwork of guilt, fear, manipulation, and paranoia mirrors the stupefying incoherence, the simultaneous hyperactivity and numbing passivity, of contemporary political spectacle. To paraphrase Richard Dyer, The Manchurian Candidate suggests how dystopia feels rather than how it might be organized. And so while on one level the idea of Donald Trump as a “Manchurian Candidate” makes no sense, it’s as charged, suggestive, and contradictory as the film’s repeated image of Iselin-as-Lincoln. In a country running on equal parts bellicosity and insecurity, politics has been further reduced to shadow play, impersonation, and dress-up. The problem is that, as ever, this particular game is being played for the highest stakes imaginable.