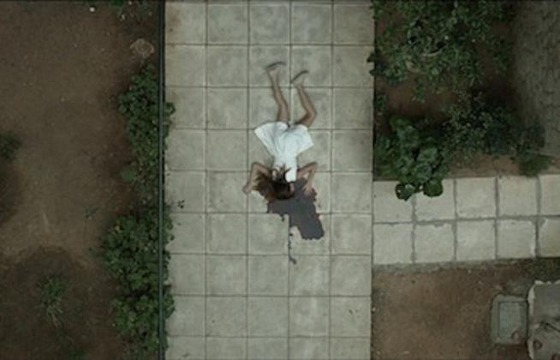 You can probably trace the idea—or at least the exact etymology—of the so-called “Greek Weird Wave” back to a 2011 Guardian article by Steve Rose. In it, the author sagely mused that “the world’s most messed-up country is making the world’s most messed-up cinema.” Of course, the movies that prompted Rose’s declaration—Yorgos Lanthimos’ Dogtooth (2009) and Athina Rachel Tsangari’s Attenberg (2011)—weren’t so much messed-up as skillfully stripped down, the latter a coming-of-age fable with the clichés tossed away, the former a chamber piece as rigorously proportioned and worked out as a zero-remainder long division equation. Weird, yes, but savvy, too. That the films contained their share of (bad) sex and (brutal) violence could just as easily have been chalked up to shifting modes of international art-house cinema as any sort of uniquely fraught national zeitgeist. If anything, Dogtooth becomes considerably weaker when interpreted as an allegory about corrupted national values rather than as an imaginative and intensive acting exercise, which is how its director seemed happier to describe it.

Whatever their merits, Dogtooth and Attenberg—and to a lesser extent Lanthimos’ comparatively underrated neo-Ionesco riff ALPS (2011), which failed to achieve the same sort of critical traction—have quite suddenly made Greek cinema a going concern. Maybe not for Greek filmmakers themselves, who are still working in a local funding vacuum where money has to be solicited from outside sources (“The Greek Film Centre is fighting against a slow death,” reported Tsangari in a recent interview with Cleo). But the Mediterranean is now suddenly a very desirable destination for film festival programmers. The selection of Athens as the epicentre of TIFF’s annual City to City section, which previously touched town in Tel Aviv, Buenos Aires, and Mumbai, scans as timely, even if the precise scheduling is a little off. Sadly, neither Lanthimos nor Tsangari has a new feature ready. But their shadows still fall over several of the selections in the ten-film series—can a TIFF program be a decathlon?—which is heavy on austere freak shows in the Dogtooth mold.

Exhibit A is Alexandros Avranas’ Venice competition entry Miss Violence, a smoothly pureed mash-up of scenes and styles borrowed from a variety of ice-sculpturist auteurs. The film is barely five minutes old before an angelic child plunges from an apartment balcony à la Antichrist (2009), while the central riddle—why did an 11-year-old girl growing up in an ostensibly prosperous and loving modern family decide to off herself?—recalls Michael Haneke’s 1989 landmark The Seventh Continent, which is starting to look more and more like Patient Zero for a decades-long outbreak of chilly festival cinema. I also spotted a preteen-girl-dances-to-pop number suspiciously reminiscent of Denis Côté’s Curling (2010), although to his credit, Avranas gets better mileage out of a carefully chosen Leonard Cohen cut than Sarah Polley did. His use of “Dance Me to the End of Love” as the soundtrack for an act of self-harm is sneaky indeed.

The problem with Miss Violence isn’t its director’s sticky fingers, but his heavy hand. For a film that ostensibly pivots on a mystery, it isn’t very mysterious. Once you figure out that the Deceptively Average Middle Class Greek Family at its centre is squirming under the thumb of its pig-eyed pater (Themis Panou), and that it’s always been this way, and that the whole sad state of affairs can only be reversed by a definitive uprising from within the household, there isn’t much to do but wait out whatever show-off sadism Avranas has in store along the way. (The winner: a protracted single-take rape sequence that plays out like a shot across Gaspar Noé’s bow.)

There certainly is a lot of “brilliant” filmmaking in Miss Violence: Avranas composes the hell out of most of his shots, either decapitating his cast members via the top of the frame (once again recalling Dogtooth) or crowding them around dinner tables so we can study the play of emotions across their faces. Panou is very good, too, adroitly modulating his performance from menacing to monstrous. The movie is impressively pressurized, but the air inside is both hot and thin. It isn’t breathtaking. It’s suffocating. 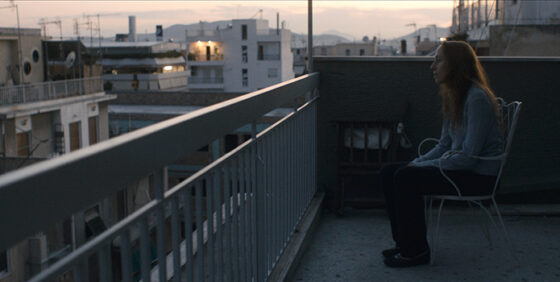 There’s a more breathable atmosphere wafting through Penny Panayotopoulou’s September, which also owes a few debts around town (mostly to Maren Ade’s The Forest for the Trees [2004]), but is very much its own movie. The ashen and angular Kora Karvouni stars as Anna, an unattached woman in her mid-30s who works a menial job at a chain restaurant and whose life revolves around her dog, Manu. In a series of short, efficient strokes, Panayotopolou sketches a portrait of loneliness at once tempered and exacerbated by constant canine companionship. Anna’s routine of early bedtimes and hasty lunch breaks in the restaurant’s parking lot with Manu in tow is a quietly vicious cycle—one that seems unsustainable for both the character and the film. When Manu dies, she shrinks even further away from the world before being drawn out by Sophia (Maria Skoula), an attractive neighbour who treats Anna with all the patience and compassion afforded by her own comparatively comfy position as a well-heeled wife and mother.

Where Miss Violence hastens to make good on its title as soon as possible, September slow-plays—and then downplays—any sense of threat. Anna’s interactions with Sophia and her children are harmless enough, even if the latter’s husband (Nikos Diamantas) perceives her as a leech. It’s uncomfortable to watch Anna’s affection become desperate (just as it was in The Forest for the Trees), but the film never threatens to become a full-on creepfest. The script fortunately foregoes any sort of Fatal Attraction (1987) hijinks in favour of gently attenuated fallout, with nary a false note struck. It’s not world-beating cinema, by any means, but the low-key smartness of Panayotopoulou’s direction, in which the camera’s immobility seems tied to the protagonist’s sense of impasse rather than a desire to trap the audience, subtly trumps Avranas’ “brilliance.” Miss Violence ends with a closed door; September has an conclusion that’s truly open, and, viewed from the right angle, arguably more unsettling than anything in the other film’s cache of hidden horrors. 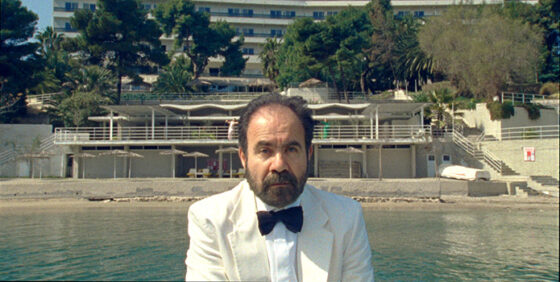 The Eternal Return of Antonis Paraskevas

The refreshing thing about September is that neither Anna nor her dilemma is a stand-in for anything larger. It’s nothing more than a well-observed character study, and also happily nothing less. Elsewhere, the City to City picks betray a whole lot of conceptual sociology, which in almost every case boils down to a variation on that old epigram: “It’s the economy, stupid.” For instance, fiscal-meltdown metaphors don’t come much more obvious than the revered Athenian figurehead holding himself for a king’s ransom in The Eternal Return of Antonis Paraskevas, which casts Dogtooth alpha dog Christos Stergioglu (who has a cameo in September) as a slightly different species of whacked-out shut-in. The titular character is a faded talk-show host who has gotten his name back in the news by arranging his own kidnapping and then hides out waiting for the right moment to make his glorious return: he’s Rupert Pupkin and Jerry Langford wrapped up into one slowly decaying package.

This king of comedy longs to return to his own personal glory days of the early ’90s, and probably the funniest thing about this mostly amusing movie is how it envisions that heady decade and the subsequent country-wide collapse as merely the latest in a series of vanished Greek empires. It’s as if, with its Hellenic origins 2,000 years out of reach, the best the country might hope for is a return to a time when everyone at least watched the same morning talk show. Writer-director Elina Psykou isn’t exactly reinventing the wheel of symbolism in her debut by having her antihero inhabit a dilapidated hotel—shades of Kubrick rather than Scorsese—and yet it’s also an appropriately transient backdrop for a story about an icon staring down the fact of his own impermanence.

There’s a more straightforward abduction narrative in The Daughter, which hits the theme of debt square on the head: it even stops to have its kidnapper read out the dictionary definition of “debt” to her victim. It’s not especially believable that a 14-year-old girl would snatch the eight-year-old son of her disappeared father’s business partner, much less that she’d be able to keep him secreted away at a deserted lumber yard (a locale which, combined with the film’s title, loudly announces that director Thanos Anastapoulos has seen the Dardennes’ Le fils [2005]). But despite its hardscrabble surfaces, The Daughter isn’t really a realistic work: it’s a thesis film about how humiliation and poverty beget reckless acts of vengeance, in this case on behalf of a cash-strapped proletariat. “The driver of the car is responsible for the accident,” explains the film’s precocious combination pro-and-antagonist with the help of her trusty dictionary. 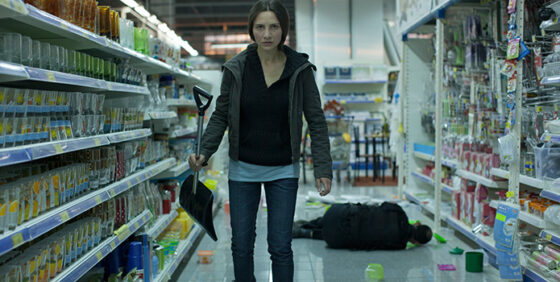 Look up “unsubtle” in the dictionary, meanwhile, and you’d probably find a picture of The Daughter, or maybe Yorgos Servetas’ Standing Aside, Watching, a return-of-the-prodigal drama that dares (if that’s the right word) to name its heroine “Antigone.” Suffice it to say that the men in her seaside hometown, where she’s returning after a failed sojourn in the big city, are right to be on edge: as played by Marina Symeou, this Antigone is a ticking time bomb waiting to go off in the face of the patriarchy. (Alternate title: Miss Violence.) Standing Aside, Watching isn’t especially compassionate about its small-town setting: the place is a dump (the camera keeps returning to the local scrap yard) and so Antigone’s astringency becomes a virtue in and of itself. But the movie is itself a little bit too clean: it’s got the sort of slow-burn structure that can make an audience feel like they’re watching something patient and thoughtful when a filmmaker is really just goldbricking.

There is an even more punishing pace to To the Wolf, a co-directorial debut (by London-born Aran Hughes and Athens native Christina Koutsopyrou) that is at once the program’s most fragile and its orneriest piece of work. It’s set not in Athens but a misty village whose inhabitants have no need to rage against the dying of the light: the sun is perpetually obscured by clouds and mountains. Huddled together in hovels or bleakly decorated bars, the almost exclusively stooped and wizened locals talk politics (“there used to be a state but we destroyed it”) and argue over frizzy television signals (“the channel is on strike”). A woman kicking what looks like a furry rock down a beaten path wonders about the possibility of eating it; guts (but whose?) are left spilled carelessly on the floor for the dogs to finish off. Taken as documentary, this is gruelling stuff; taken as fiction it verges on Borat-esque ethnic caricature. But To the Wolf slips in between the binaries. It was filmed with both the collaboration and cooperation of its subjects, as the directors’ original plan to craft a piece of village vérité shifted when they realized that the news—and the consequences—of the financial crisis had spread well beyond the nation’s capital.

Instead of making a movie about a character’s response to Greece’s failing economy—as in The Eternal Return of Antonis Paraskevas, or even more obviously, The Daughter—Hughes and Koutsopyrou focus their attention on people with almost comically limited options, and end up producing something richly suggestive. In a country that often trumpets its own sense of history, To the Wolf obliterates any nostalgia for an older way of life. The telephone towers that lurk like Martian tripods in the background only enhance the sense of isolation—information only flows one way here—but more than that, they look like something very Greek indeed: ancient relics. The predator of the movie’s title is time, which seems to be hunting in reverse. To the Wolf offers the strange sight of the distant past overtaking and devouring a hobbled, tense present.