Black, White, and Giallo: Forzani & Cattet’s The Strange Colour of Your Body’s Tears 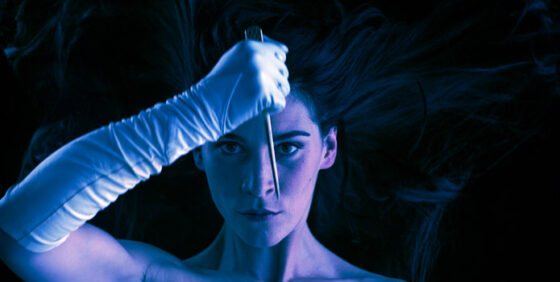 Any viewer in need of a primer on the semiotics of the giallo film will be well-served by the opening moments of The Strange Colour of Your Body’s Tears. In commencing their second full-length effort after their similarly arresting debut Amer (2009), the Belgian husband-and-wife team of Bruno Forzani and Hélène Cattet rapidly proceed down the lurid checklist of essential sights that no self-respecting exercise in the genre could do without.

No slouches at titles themselves, Forzani and Cattet open The Strange Colour of Your Body’s Tears with the requisite degree of flourish. Behold, if you dare…a woman’s lips against a knife, pressing as if to deliver a kiss…the face of a creepy child’s doll, the sole witness to any imminent transgression…arms trussed and restrained by ropes, pulled tighter before being unexpectedly cut…a woman’s naked torso, a blade drawn across a nipple (but not cutting it, at least not yet)…a mouth in mid-gasp…a clenched hand…a single eye gone wide with terror.

Intercut with a colour sequence of the film’s steely-eyed male hero arriving on the scene and the title credits (rendered in red, of course), this staccato array of black-and-white images partially serves to introduce the mystery at hand. The man we see is Dan (Klaus Tange), a businessman who has returned from a trip to the apartment he shares with his girlfriend, only to find her gone and the door chained from the inside. The images may be perceived as clues to her fate, as well as elements in a mystery that widens to encompass many of Dan’s neighbours in the gorgeous Art Nouveau building where they live in Brussels.

Yet they also re-establish the directors’ ardent devotion to giallo’s seedy vocabulary, right down to the most requisite item on the list: the black leather gloves worn by the unseen killer. Of all the fetish objects on near-continual display during giallo’s heyday—an era that roughly stretches between post-Psycho Mario Bava murder-thons like Blood and Black Lace (1965) through to Ruggero Deodato, Lamberto Bava and Umberto Lenzi’s ever more thuggish efforts to outdo the misogyny of the American slasher films in the ’80s—those gloves have become the most iconic. It’s an infamous piece of giallo lore that Dario Argento favoured wearing the gloves himself in any insert shot he needed for the innumerable strangulations, stabbings, hammer attacks and involuntary defenestrations that fill his oeuvre.

Perennially stylish yet full of diabolical associations, those leather gloves have come to stand for more than just a nod to Argento, a filmmaker whose own efforts to capitalize on his late-career cachet reached a nadir with the incompetent self-pastiche of Giallo (2009). Instead, they represent something more like the genre’s state of perennial fashionability, something it’s enjoyed ever since the late ’90s, when American companies like Anchor Bay and Image began reissuing DVDs of titles that had been only available internationally in expurgated forms, if at all.

Before then, giallo’s profile was relatively negligible beyond ardent cultists, which is why Geoffrey O’Brien seemed particularly savvy when he gave it unusual prominence among the more respectable Hollywood and European fare that sparks his reveries in The Phantom Empire (1993), his semi-delirious survey of cinema’s first century. O’Brien must have been bemused to see giallo catch on with a new generation of pop-culture cannibals, given the original works’ own tendency to eat themselves. Writing not long before the genre’s skuzzy memes would be given new life thanks to DVD, O’Brien perceived the strange value of these artifacts, these movies that “annulled any possible distinction between the beautiful and the corrupt by perfecting an ultrarefined tawdriness, a cinema of poetic cruelty whose practitioners (Mario Bava, Vittorio Cottafavi, Riccardo Freda, Antonio Margheriti, Sergio Corbucci, Dario Argento) would turn out to have been the authentic inventors of the post-postmodern movie: authentic because they invented nothing, because they stole from their own movies, because they were unable to stop obsessively tacking together a recycled dub of a dub of some archaic internalized European narrative.”

And yet the movies have not only survived but attracted acolytes, Forzani and Cattet having emerged as the most studious of the lot. The enduring appeal is not so hard to understand. The flamboyant displays of ’70s Euro-chic most certainly point to a love of plumage that few contemporary thrillers share. The same goes for their assaultive soundtracks—since even many of the lowliest giallo entries came equipped with an enviably audacious musical score, it’s no wonder that Forzani and Cattet have opted to repurpose excerpts from vintage works for their own films. (The new score makes stunning use of themes and stings by Riz Ortolani, Bruno Nicolai, and the ubiquitous Ennio Morricone.) And though the genre’s most outré examples may be too viciously and salaciously sadistic for thrill-seekers of later generations, the intermingling of violent and erotic content may also seem defiantly adult when compared to the typically adolescent sensibility of the vast majority of modern descendants.

But one reason Forzani and Cattet’s films are so alluring and unnerving is how well they tap into giallo’s fundamental core of irrationality. They invest a new elegance and a renewed vigour into the “science of plotless shock and dismemberment.” O’Brien intended that phrase to serve as faint praise for Bava and his successor Argento, but it’s also suggestive of the careful manner in which The Strange Colour of Your Body’s Tears induces ever more advanced stages of dread and derangement on the viewer’s part.

The new film also confirms that the duo’s objective is something other than paying homage to their forebears. In an interview conducted shortly after the film’s Locarno premiere, Forzani and Cattet prefer another description of their goals: “We tell an intimate story and we develop a personal universe through this vocabulary. We don’t see the two films only as homages—it’s just one face of them. There is something behind this surface.”

Venturing behind surfaces is one of the primary fixations for several characters in the new film. When not being badgered by a detective who suspects Dan of murdering his girlfriend, our stricken hero conducts his own investigation, a process that uncovers a shadow world that exists within his apartment building. Many of the people he meets have their own cautionary tales to impart. In one of the film’s most ingenious set-pieces, an elderly woman describes how her doctor husband’s obsession with strange noises in their ceiling led to his own disappearance. Elsewhere, a woman is menaced by a faceless figure that can sequester itself under the wallpaper. Exploring ever further into the building, Dan comes to discover a series of secret corridors and concealed rooms, which may also be considered physical manifestations of the desires that his girlfriend kept hidden.

Yet other events posit Dan himself as a series of surfaces. That notion is strikingly literalized in a sequence in which Dan contends with a rapidly expanding number of doppelgangers. Then there is the bracingly visceral scene in which the hero faces off against the inevitable knife-wielding maniac, the twist here being that the assailant appears to be attacking from somewhere underneath the victim’s skin.

As you might suspect, a quality of dream or nightmare logic permeates much of The Strange Colour of Your Body’s Tears, even though its creators remain so insistent about the dictates of the mystery narrative that they’ve intentionally seeded the film with clues about the killer’s identity. (Anyone who can determine the solution from the evidence here deserves a substantial cash prize; I might even provide it.) Further confusion is generated by the difficulty in determining whether the story is meant to have a contemporary setting—while the appearance of a cellphone definitely points to the affirmative, nearly every other element of the décor implies otherwise. The filmmakers give a good portion of the credit to the mix of eras that marks the look of Brussels, their home and that of most of the locations for the new film. “We think these Art Nouveau buildings give an oneiric aspect to the city,” they suggest. “The look of 19th-century houses inside a modern city has inspired us to create a fantastic universe with no period boundaries.”

In fact, the playfulness they demonstrate in regards to narrative forms and temporal ambiguities may actually steer them away from giallo terrain into the most avidly surreal varieties of Japanese anime. The filmmakers cite Kon Satoshi as a primary influence, and it’s easy to see how both of the team’s films share the ever-dissolving storylines of Kon’s Millennium Actress (2001) and Paprika (2006). Kon in turn has cited Kurt Vonnegut Jr. and Philip K. Dick as aesthetic heroes, so maybe there’s an aspect of hearty all-American weirdness in the team’s neo-giallos as well.

There’s a further deviation from the mean when it comes to the films’ sexual component. A fear of the femme fatale is nevertheless a prominent element of the new film, whose eagerness to blur boundaries between pleasure and pain is most memorably demonstrated when broken glass is crushed into Dan’s chest by the breasts of a sinister seductress. (We might also note the distinctly vaginal appearance of more than one knife wound.) But Forzani and Cattet are usually too savvy to trade in the misogyny that is giallo’s most frequent sin.

“Amer takes the point of view of a female protagonist,” they note. “This time it’s a male point of view. We have approached the two films with the mix of our points of view as male and female directors so the two films complete each other. In Amer, the fantasy objects were the men—here, in this one they are the women. As we love playing with fear and desire to increase the excitation of the main characters and submerge the audience in their own labyrinthian minds, these fantasies are sometime oppressive and nightmarish but they are ultimately about the fear of the unknown and of the main character’s own dark side. It’s about what he or she projects onto the others.”

Those who have dismissed Forzani and Cattet’s films as mere exercises in style may be surprised to learn that they’ve spared a thought about subtext, too. And even so, it’s hard to complain about style when it’s so unabashedly extravagant. Likewise, the points at which the plot’s eddies, loops, and blind alleys cause either film to lose momentum are easily forgiven in light of the gloriously irrational and intoxicating nature of their set-pieces, of which The Strange Colour of Your Body’s Tears contains their most superb to date. Here and elsewhere, there’s a feeling that the team have successfully adapted the giallo film to their own purposes rather than merely recreated its poetic cruelties. They’d be inclined to agree. “The cinematic vocabulary of the giallo fits perfectly into our universe and the subjects we approach,” they offer. “It is a very rich and creative language with which we take a lot of freedom!”

The Strange Colour of Your Body's Tears