Jordan Cronk/CS56, Features, From The Magazine 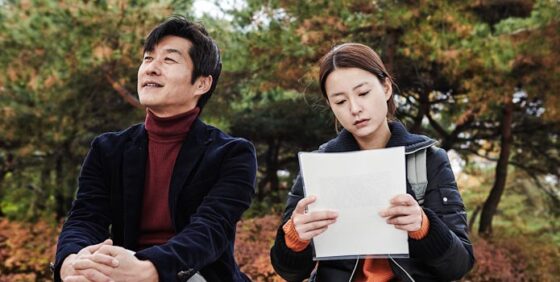 As an agent for acclimation, alcohol is one of our most proven resources. In the cinema of Hong Sangsoo, it’s less a casual commodity than a conduit for conducive social interaction, a property of both emotionally collateral and physically direct engagement. The characters portrayed in the prolific South Korean auteur’s work drink incessantly, to the point of excess and usually beyond, beer and soju bottles strewn geometrically across dining tables in an array of intuitive designs (and never further than arm’s reach, of course). As befits a filmography featuring heavy drinkers, written and directed by a heavy drinker—Hong is known to encourage, shall we say, method acting as the occasion sees fit—Hong’s narratives are often unpredictable proceedings, as restless or volatile as any given individual in the director’s dilated purview. It’s almost as if in Hong’s universe, as opposed to (most of) our everyday lives, liquor itself is the constant and emotion is the variable, as likely to facilitate communication as it is to reduce the same to simply a series of loaded, unconscious mannerisms.

This unstable configuration of erratic characterizations grafted onto shape-shifting chronologies is what has kept Hong’s approach fresh each time out, even as he has studiedly avoided deviating from such a deceptively modest aesthetic model. If his work has felt at times more like variations on a very specific set of themes rather than a meditation on any sort of broad sociological issue(s), this has lent the whole of his corpus a consistently familiar, intimate sense of (dis)comfort. Just as each drink presents new visual, physical, and emotional obstacles for the imbiber to negotiate, so too does each new Hong film construct a set of thoroughly recognizable but novel interpersonal challenges for its characters to navigate, matters which can lead to confrontation, communion, or, best-case scenario, commitment.

Yet while Hong’s recent fascination with female leads and a general (and likely temporary) shift toward a more deceptively linear storytelling mode might seem to signal a potential sea change in his methodology, his most recent efforts still play more as a concentration of his established thematic and conceptual concerns rather than a concerted shift in emphasis. It’s thus that Hong’s pair of 2013 world premieres, Nobody’s Daughter Haewon and Our Sunhi (the former bowing in Berlin, the latter in Locarno), share more than calendar space. As per their respective titles, these female-focused fictions take a single principal protagonist as their subject, a centralized configuration that Hong has seemingly been working toward recently: both Oki’s Movie (2010) and In Another Country (2012) featured women in the lead role, though in both cases these characters worked more as catalysts for the greater deconstruction of the male sexual id than as true female portraiture. Furthermore, both those earlier films made a point to emphasize their structural ingenuity, a strategy which Haewon and Sunhi dispense with. Nevertheless, both establish internal patterns, recycle motifs (both visual and, surprisingly, auditory: each film features diegetic uses of music which work almost as theme songs), and feature a number of the same actors. If Hong does concern himself with one specific theme across these two films, it’s our collective pursuit of an earnest and engaged emotional understanding—or, as one character in Our Sunhi rather bluntly proclaims, “Sooner strangle an infant in his cradle than nurse un-acted love.

Refreshingly streamlined, both Haewon and Sunhi proceed without concession to a larger conceptual schema (though Haewon does employ first-person, diary-like narration and elliptical dream sequences, these are mostly a means of contextualization). Rather than push the meta machinations of Oki’s Movie, the near-phenomenological revisionisms of The Day He Arrives (2011), or the comedic triangulation of In Another Country even further, Hong instead opts to let these films breathe simply by observing his central characters as they navigate the waters of collegiate-age romance and regret. Hong sets both stories in motion in a notably similar fashion: in short order, both of Hong’s heroines unexpectedly cross paths with mysterious figures—a vacationing celebrity (Jane Birkin, playing herself) in Haewon and a stylish, chain-smoking potential suitor in Sunhi—who, never to be seen again, inadvertently motivate each protagonist to act upon dormant feelings. This, of course, inevitably leads both ladies back to the comforts of the bottle, adding another soused and besotted duo to Hong’s growing gallery of disenchanted, self-destructive protagonists.

Of the two ladies, Haewon (Jeong Eunchae) is the more reckless and indulgent. After her brief encounter with Birkin and a subsequent exchange outside a café with a young man, which her mother facilitates and encourages her to build upon, Haewon contacts her ex-boyfriend, a professor named Seongjun (Lee Seongyun), out of both loneliness and convenience. The two meet, drink, and attempt to duck his former students, only to end up seated in a restaurant surrounded by these very same people for another of Hong’s expertly written, uncomfortably candid conversation scenes. Seongjun, now married and a part-time film director (Hong’s most commonly assigned vocation, prompting an easy correlation between himself and his male characters), is questioned incessantly as the group eats and drinks and drinks some more, and is put on the spot about everything from his profession to his break-up with Haewon to the effect their relationship (once a teacher/student controversy) has had on their group dynamic. Whether roused by Haewon’s invite or persuaded by guilt, Seongjun soon begins his romantic pursuit of Haewon again, losing sight, as Hong characters tend to do, of everyday obligations and commitments.

For her part, Sunhi (Yumi Jeong, who also played the title character in Oki’s Movie) as well is an incessant object of desire for the men in her life, and in the plural lies the problem: there are, in fact, three men. Following a confrontation with a classmate and a resulting conversation with Professor Choi (Kim Sangjung), a former teacher whose advances she entertains in an effort to procure a recommendation letter, Sunhi, like Haewon before her, proceeds to get drunk with her ex-boyfriend, Munsu (also a filmmaker, and also played by Lee Seongyun), who appears desperate to win back her affection. Further complicating matters is the fact that these two men know each other, just as they know Jaehak (Jeong Jaeyeong), a slightly older and established director who quietly pines for Sunhi despite offering romantic advice to Munsu. What transpires is a dark comedy of errors and miscommunication, each character appearing to seek the same sort of intense connection, yet, in their own individual ways, failing to properly articulate as much. Case in point: a piece of advice offered by Choi in the aforementioned scene keeps cropping up in different iterations throughout the film, like a game of broken telephone gone horribly awry.

Though the films’ relative absence of any greater structural conceit might provide a handy excuse for a lack of formal commitment, Haewon and Sunhi are instead two of Hong’s most aesthetically compelling films to date. Excepting perhaps his work in black and white, Nobody’s Daughter Haewon may be the most purely beautiful achievement of Hong’s career; a mid-film transition from the Seoul city centre to the remote mountain locale of Namhan Fortress inspires a series of stunning compositions, one of which, framed from behind his actors and overlooking a canyon with wind-blown flags positioned at either end, is so breathtaking that Hong even returns to it a second time to bask in its glow. The film’s shift to this moodier, expressive expanse seems to mirror Haewon’s reconciliation with her feelings—not for nothing does an early scene linger as Haewon joyously dances her way across a sparsely populated park, a rare occasion for this woman to express a sense of freedom, even in her confusion, that she can’t seem to replicate in the company of men. In this sense, Hong’s antiquated employment of the zoom lens weighs heavier here than usual: throughout the film, we, like Seongjun, are attempting to get closer to Haewon, even as she pushes against our advances. As the film’s title implies, this may very well be a futile pursuit, but rarely in Hong has the struggle proven so rewarding.

Perhaps Hong’s most rigorously composed work, Our Sunhi consists largely of lengthy, static two-shots wherein characters psychologically purge to the point of discomfort, forcing one to confront these contradictory personalities head on. (Hong has never been one for cross-cutting, but even so, a handful of scenes here run close to ten minutes in length; an early scene between Munsu and Jaehak approaches 12.) In another bit of symmetry with Haewon, the claustrophobic interiors of Sunhi’s first two acts eventually give way to a concluding sequence set outdoors. With the coordinates of this love quadrangle charted and seemingly set (Jaehak is the only one of the three men whom Sunhi seems willing to romantically respond to), this final flourish at Changgyeong Palace, a sort of open-air oasis, plays like a breath of literal and figurative fresh air. By systematically bringing all the characters together via a series of deferent cellphone calls, with the three men eventually meeting in an awkward convergence as Sunhi exits the scene, Hong neatly upends the preceding 85 minutes, transforming a previously draining relationship drama into an ironic comedy of coincidence.

With his penchant for modest, character-oriented narratives, deceptively elemental compositional sense, consistent desire to till similar thematic soil and, lest we forget, employment of booze as situational utility, Hong has understandably been tagged with Ozu comparisons throughout his career. But a more appropriate parallel, particularly in regard to Hong’s recent work, may be Eric Rohmer. Both Haewon and Sunhi are, in a sense, moral tales, aligning them with the nouvelle vague iconoclast’s famous sextet. However, with their emphasis on seasonal dramaturgy—the wintry, snowcapped plazas of The Day He Arrives, the day-glo, ocean-side summer retreats of In Another Country, the pointedly (and poignantly) autumnal sheen of Haewon and Sunhi—and concern with matters of the heart, Hong’s last few films feel of even greater spiritual accord with Rohmer’s triumphant late-career compendium Contes des quatre saisons (1990-1998). It may be reaching to assign conceptual divinations to a career as consistent as Hong’s, particularly since his work has often betrayed an awareness of such seemingly inconsequential things as seasonal setting (see, for example, Woman on the Beach [2006]), but his recent output, no matter Hong’s carefully calibrated subtlety, nonetheless assumes a more imposing stature when considered of a piece.

It’s perhaps telling that this Rohmeresque group identity among Hong’s recent works has emerged as he has gradually gravitated away from a male perspective. With few exceptions, the men in Hong’s work tend to be interchangeable—14 films in 17 years will have that effect, and it’s arguably the intended effect anyway (repetition being a primary Hong concern, from characterization to textual exposition to, finally, visualization). What’s fascinating, then, is that his current curiosity with women has resulted in some of the most uniquely passionate, indefatigable females in contemporary cinema. Oki, Isabelle Huppert’s nonchalantly amorous vacationer from In Another Country, and now Haewon and Sunhi: four utterly distinct, at times contradictory, but altogether vivid women seeking affection from men but who are in no way beholden to their physical or intellectual whims (“I don’t need to date men,” Sunhi confidently repeats more than once). Haewon, an unapologetic dreamer, will persevere despite her vulnerability; likewise, Sunhi, a girl prone to “disappearing for years,” seems, by the conclusion of her narrative, to be all set to move on to the next stage of her life, with or without these men. “Women shouldn’t be held back,” Jaehak explains to a distraught Munsu in an early scene in Our Sunhi. Thankfully Hong, chronicler of all things better left unspoken, doesn’t seem interested in doing anything of the sort.

Posted in CS56, Features, From The Magazine