By Blake Williams In CS56, Features, From The Magazine 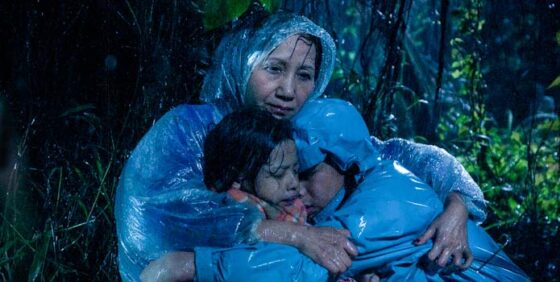 The title of Tsai Ming-liang’s tenth feature Stray Dogs bears a fairly conspicuous resemblance to a key metaphor from Laozi’s 6th-century Chinese philosophical text Tao Te Ching, which allegorizes man’s relationship with the heavens as that of a straw dog and the one who created it. Literally a dog-shaped figure made out of straw, these forms were designed to survive a ritualistic utility in an ancient Chinese tradition: highly revered until the completion of the ceremony they were made for, they are then indifferently discarded and forgotten, having been neither loved nor hated. (“Heaven and Earth are heartless, treating creatures like straw dogs.”)

Straw dogs and stray dogs, thus, are very similar things, emotionally: they are disposed goods, pitiable and sullied, relegated and prevented from fulfilling a greater potential. Tsai’s evocation of this metaphor is more political than metaphysical, and the film is unusual in this regard (Tsai films’ have never left their political subtext this close to the surface). Known for his musical numbers, the only song in Stray Dogs is delivered bitterly by Tsai’s muse Lee Kang-sheng as he holds up a real estate placard under a highway: “My exploits are naught but mud and dust…When will the grief of the Empire’s subjects end?” Presented with a hefty dose of defeatism, bodies are, once again, Tsai’s paramount preoccupation, and while his inquiries have always revolved around confrontations with spatial disturbances and breaches in privacy, lately he’s beginning to place a more concentrated emphasis on their relationship with time.

In approaching how time is dealt with not only in Stray Dogs—Tsai’s first feature since Visage (2009)—but also the two shorts he made in the interim (Madame Butterfly [2009] Walker, and No Form [both 2012]), it’s essential to consider these films in light of his conversion to digital filmmaking. Known for his static, minutes-long master shots, Tsai’s notoriously hands-off découpage has been in a state of flux for the last decade. Good Bye, Dragon Inn (2003) was his most austere exercise in long takes up to that point; its successor, The Wayward Cloud (2005), felt like Eisenstein in comparison, featuring individual scenes that were fragmented into up to four or five different camera angles. I Don’t Want to Sleep Alone (2006) did little to develop Tsai’s formal vocabulary, but Visage suggested a new, rigorous venture into unedited studies of performative acts.

His last film made on 35mm, Visage can in retrospect be seen as a trial run for the direction he would take in his further explorations of digital temporality: shots of Laetitia Casta blacking out windows with tape and construction paper stretched upwards of five minutes, and an uncut scene of Jean-Pierre Léaud in front of a rehearsal room mirror ran eight and a half minutes. Made the same year, the digitally shot, 35-minute Madame Butterfly contains only three shots—two of which are approximately fifteen minutes long—while Stray Dogs, his first feature-length digital work, incorporates shots of eleven and fourteen minutes (not to mention eight other takes that go on for at least three minutes apiece).

For structural filmmakers (and fans of their work), this ought to come as no surprise. As we’ve observed in the last decade, to go digital is to go long: James Benning’s shots jumped from three/ten-minute durations to hour-length as soon as he abandoned celluloid with Ruhr (2009), and he has since broken the 90-minute barrier with his single-take, day-turns-to-night experience Nightfall (2011); Ernie Gehr left his camera rolling in front of some sunsets to produce his contemplative, three-shot, 39-minute Waterfront Follies (2009); and then there’s Abbas Kiarostami, who one might have mistaken for a structural filmmaker if one’s first exposure to his work had been the five-shot, 74-minute Five Dedicated to Ozu (2003), the third and most challenging digital project in a decidedly “experimental” ten-year period. What’s perhaps most fascinating about this pattern is that these artists aren’t stretching things out for the sake of Bazinian realness: in these three examples, and now for Tsai as well, the long take is employed to achieve a sort of hypnosis, sobering the mind so that it might be more susceptible to the sublime.

Tsai, however, is not a structural filmmaker. The few formal tendencies he exhibits that could be linked to that movement (long takes, fixed frames) could just as readily be traced to his new wave idols of the 1960s. His films still are, after all, character-driven narratives, however sparse and elliptical those narratives may be; they’re just as distinctive for their depictions of bodies and mobility, space and place, and alienating urbanization as they are for their omission of montage. Take, for instance, a scene that could be called Stray Dogs’ centrepiece. Captured entirely in an uncut medium shot, Lee Kang-sheng joins his already-sleeping son and daughter in their makeshift bed positioned beside two bowls catching drips from the leaky ceiling. Once settled into a supine position, he turns to face a third figure resting on the pillow next to him—not another person, but a head of cabbage with a lipstick-drawn mouth and eyes, placed atop an overstuffed sweater (the children named it “Miss Big Boobs”). After lethargically acknowledging the cruciferous scarecrow, Lee spontaneously becomes spooked by it, hastily smothers it with his pillow, and then proceeds to eat—and partially regurgitate—the leafy head before finally bursting into howling sobs.

This nearly eleven-minute scene is a quintessential Tsai set piece, demonstrating his proclivity for dropping an isolated micro-narrative into his broader structure without regard for literal connectivity to the scenes around it. A prelude to the film’s nightmarish final act, it’s a scene that actually may only exist to serve as an antithesis to the rest of the film’s dramatic strategy, being one of only a few instances in Stray Dogs that incorporates a significant (i.e., non-mundane) action into its confined stasis. The behaviours of Tsai’s characters in this film could most accurately be described as mannequin-esque: their bodies (Lee’s in particular) get caught in poses that only permit basic motions such as combing hair, raising food to the mouth, pissing, lying in a bed or bathtub, holding up a large advertising placard, or looking at a mural.

Tsai’s mise en scène has become increasingly indistinguishable from the vernacular of performance art: the emphasis he places on his characters’ bodies, their placement and function in space, and the depiction of a gesture or task from beginning to end are all hallmarks of the Conceptualist tradition. One can see the connections further when looking at early-’60s and -’70s video artists (many of whom were essentially performance artists and saw video as a documentary tool), namely Bruce Nauman’s studio performances, Vito Acconci’s bodily/spatial interventions, and Shigeko Kubota’s recurring attention to water (especially rain and rivers). To varying degrees, these three artists can all be tied to the Fluxus movement, which makes for an even deeper reference point in mining Tsai’s recent stylistic and aesthetic methods. In particular, certain Zen philosophies promoted in the work of John Cage and the fellow Fluxists he influenced (e.g., Yoko Ono) are most definitely discernible in late Tsai.

They’re made explicitly apparent in Walker, in which Lee, dressed as a monk and carrying a plastic bag holding unseen objects in one hand and a wrapped sandwich in the other, walks through Hong Kong in super -slow motion, the bustle of the city flowing around him. The piece moves from day to night twice over the course of its brief running time, the walker’s barely visible visage bowed to the ground at all times to suggest his enduring devotion. With an average shot length of 68 seconds, Walker intends to hone our attention toward the physical endurance required of Lee (the actor) in performing this act, the absurdity of his motions reaching its zenith when he takes a long, drawn-out bite of his sandwich. This is the paradox of this work: the piece promotes a meditative response, yet it’s also intrinsically hilarious. (Fluxists considered humor to be an essential element in their performances.)

This Zen sensibility is even more present, albeit with much less humour, in Stray Dogs. Take the final scene of the film, which lasts twenty minutes and depicts little more than two characters standing still in a room staring at a mural. The drawing, made by artist Gao Jun Hong, depicts a rocky landscape, and seems to strike awe into those who stand before it, inducing a suspended state of reverie. The scene, composed of two shots, begins with a camera track that meets Lee and Chen Shiang-chyi in the middle of the room, reminiscent of the slow glide up to the vacuum in the climactic scene of Apichatpong Weerasethakul’s Buddhist Syndromes and a Century (2006). From the moment the camera parks into a medium close-up framing of Lee and Chen until the next cut more than thirteen minutes later, there is minimal movement or variance of expression; the most momentous event is a tear that trickles out of Chen’s right eye, creating a trail that never quite reaches her jaw line, drying and disappearing over the course of the single take. (Given Chen’s attempt just a few scenes earlier to personify Lee’s decaying house—she described the leaky domain as old, wrinkled, and filled with tears—one draws a metaphorical connection between her body and Lee’s home, an association Tsai has made before in The Hole [1998] and What Time Is It There? [2001]). In the background, a train passes by—twice— to momentarily reactivate the frame, and our consciousness.

It’s pertinent to recall here that Tsai’s earliest creative work was not in cinema or television, but experimental theatre. His few plays—all made while he was a student—exhibit the roots of his cinematic practice. In A Sealed Door in the Dark (1983), two inmates kept in the same prison cell engage in a territorial rivalry when one of them steals the others’ clothes, and in The Closet in the Room (1984), a writer works on a new script in his tiny bedroom, experiencing a crisis after he discovers that a man has been living in his closet. There’s an undeniably absurdist, Beckettian quality to these scenarios, exhibiting the same minimalist approach that dominated the Irish playwright’s late period, typically evoked through small spaces, confined bodies, blankets of darkness, and abstruse concepts; Breath (1969), perhaps Beckett’s most notorious late-career work—consisting entirely of the sound of a long inhalation and exhalation, a light that fades in and dims out in coordination with the swelling lungs, bookended by piercing birth cries—lasts only 25 seconds.

For the unsuspecting theatregoer, this piece is most memorable not for its thematics, but its brevity; it’s an audaciously stunted approach to theatre that subverts our expectations of durational media. The same applies to Tsai’s digital master shots, though with a significantly inverted effect. He isn’t limited by the relatively diminutive allowances of film reels, and this represents not only a tremendously liberating breakthrough for how Lee and co. spend their time in front of the camera, but also a profound shift in audience expectations of narrative flow. Never threatening to run too short, his scenes could just keep going, running as long as a hard disk will allow, stretching out into oblivion. On more than one occasion (especially in Stray Dogs’ later scenes) that idea begins to feel like a legitimate possibility. Then Chen’s eye will blink, or Lee’s neck muscle will twitch, and we’re reminded that the fundamental physicality of human performance won’t allow it. The camera could keep recording, but eventually the bodies of the actors will fatigue, and the walls decay around them.